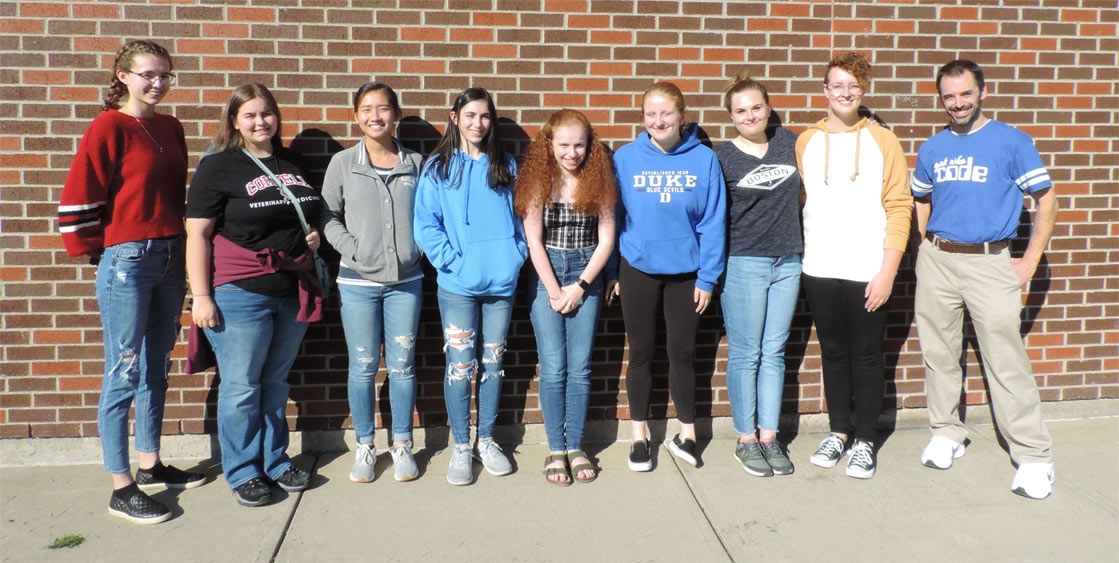 Another pair created a number converter.

A third group is building and coding robots.

All are members of the Girls Who Code Club at Cicero-North Syracuse High School.

“I have a lot of driven young women who are learning a lot about technology and themselves, and are flourishing because of it,” says Matt Harbinger, the club’s advisor. “The pitch that I usually give is not, ‘You should take this because you’re going to be a computer scientist one day, therefore you should be in this club,’ because we would have two people. Instead, I ask, ‘What do you want to go to college for, what do you want to do as a career, because you’re going to be using technology, you’re going to be using computers, and so it’s time to get in on the ground floor.’”

Following a push for more young women in the technology field, C-NS received a $20,000 grant from New York state to begin a Girls Who Code Club during the 2015-16 school year. It was the first such club in Upstate New York. Harbinger says C-NS was chosen, in part, because of its past success in this area.

“I teach computer science, and a lot of my female students sign up for the National Center for Women in IT (NCWIT) award, and they talk about their aspirations in computing,” Harbinger says. “I have a lot of really smart, motivated, talented students, and they’ve won the state award a lot. And because of their successes, our school was recognized as a good place to start the club.”

The Girls Who Code Club has approximately 20 members, and includes a mix of tenth, eleventh and twelfth grade students. Harbinger says the club is project-driven, and during their weekly meetings, members create apps, work on robots or learn how to code, among other things. They also go on college visits and take trips. In the past, members have visited companies such as Samsung, Mashable and Google, and even met the founder of Girls Who Code at the organization’s headquarters in New York City.

But perhaps more importantly, Harbinger says the club is helping provide an opportunity for all genders in the technology field.

“The numbers for women in college and in the workforce are definitely increasing,” Harbinger says. “I would venture to say they’re not anywhere what they should be yet in terms of percentages, but I definitely think there’s an upward trend for women in general being in technology. I think having good role models is a definite factor. I think the normalization of women in tech is a factor. You see it everywhere. Girls Who Code is a big deal.”

What has been your favorite part of the Girls Who Code Club?

“Just having the ability to learn what I want. You have a nice focal point for help, but you’re still open to whatever you need.”

“Probably [building and coding robots] because now I know the material. Before, we basically just problem-solved for a while, trying to figure out how we would use the Lego Mindstorms to do anything. We wanted to make a Candyland, basically, but we couldn’t find a way that would ethically work to program it… In [Raspberry Pi], we can do random, but we’re steering away from that and really just having fun with racing.”