Whether your baby is a newborn, a few months old, or approaching his 1-year milestone birthday, you’re probably exhausted. Those full nights of restful sleep you had before your baby was born have vanished. And while being a new parent is exciting, it can also be draining. Sleep is vital for both your infant—and for you.

“Parents who are not in control of their own sleep choices are putting their health and their ability to care for their family at risk,” says Chris Herrera, a birth and postpartum doula, and owner of Birth Beautifully. “Make sleep a priority.”

Learn here how to power through some typical—and temporary—patterns so you and your partner can still function.

Below are common habits of babies or situations in which you may find yourself as a new parent. Hannah Thornton, a certified pediatric nurse practitioner at Child Healthcare Associates, located in Liverpool and East Syracuse; Herrera; and mother Melissa “Mell” Fields of Liverpool each weigh in with their experiences.

During the first month, babies need a lot of sleep—about 16 to 17 hours. Typically, they sleep and wake around the clock with feedings in
between.

“The pattern of a newborn’s sleep is pretty rough, and I had no idea how rough it would be,” says Fields, whose son, Jonah, is now 22 months old.

This stage is especially demanding because it’s most likely your first encounter with interrupted sleep over a long period of time. The best way for you and your spouse to get through this is by working together. Depending on whether you breast or bottle feed, you can create shifts overnight during which one parent can sleep the first four hours, then switch so the other gets a turn. Also, divide household chores during the day.

Fields says her son has never been a good sleeper, and it took her and her husband, Aaron, some time to figure out how to divide up the sleep chores. “We’re still adapting as Jonah’s sleep adapts,” she says.

Herrara has over the past 13 years helped hundreds of families with babies. “Equal parenting is highly emphasized for the wellbeing of the baby. This is achieved through mutual participation in daily routines, including bedtime and waking rituals,” she says. “The support of a partner enables a stronger family unit.”

2.  Create a restful ambiance at night.

Some babies settle into the newborn sleep routine with day-night reversal, which means they occasionally mix up their days and nights.

This is quite common, says Thornton, who worked in the neonatal intensive care unit (NICU) at Crouse Hospital prior to the joining Child Healthcare Associates. Often when babies are in utero, they’re more likely to sleep during the day because the mother’s activity can be soothing. Then, at night when the mother lies down and her activity has paused, they’ll wake up.

“So it’s no surprise that when they’re born, they still have that tendency to want to be awake and moving around at night,” she says.

Her advice for parents is to decrease stimulation at night: Get very soft lights for middle-of-the-night feedings, keep your voices low and use soothing tones. During the day, open the blinds to let in natural sunlight, and don’t be afraid to make a little noise. Eventually, the baby will pick up on the routine as she’s regulating her circadian rhythm.

Around 6 to 9 months, babies stray from multiple cat naps a day to typically two or three more solid naps.

It seems logical to think if a baby doesn’t nap as often during the day, they may sleep better at night, which, in turn, would benefit your sleep. So, missing a nap would be no big deal, right?   “Keeping a baby from a nap, or not implementing naps throughout the day, is not a helpful strategy for getting a baby to sleep longer at night,” Herrera says. “This is because napping reduces levels of the stress hormone, cortisol. A baby who hasn’t sufficiently napped may be cranky and unhappy and will have trouble falling asleep at bedtime due to the unrelieved buildup of cortisol.”

But Thornton notes that families still have lives to live. Many couples have two, three or more children, making it virtually impossible to adhere to the same nap time every day. So don’t beat yourself up if once or twice a month you’re on the go and the baby misses a nap, she says.

Fields says though she wasn’t a napper until Jonah was born, she now uses these quiet times to lie down and rest, even if she can’t sleep. Also, she and Aaron created a more consistent nap schedule once Jonah’s sleep times became fewer but longer.

4.  Be ready for teething pains.

Teething begins anywhere from 4 to 8 months, and may affect a baby’s sleep pattern.

Babies around this age are sleeping for longer chunks of time but still not a consecutive eight hours. Add teething to the equation and you may be up more frequently again. Have a few items on hand to relieve your baby’s pain, which will make it easier for him to settle down.

Thornton recommends giving your baby a frozen washcloth to chew on, or trying the old fussy-baby strategies, such as rocking, swaddling, singing or even reading a book. Tylenol or Ibuprofen (after 6 months) is also an option to settle discomfort if the baby is inconsolable.

One of several recommendations to reduce the risk of SIDS (sudden infant death syndrome) is to room share with your newborn for the first 6 months and as long as a year.

“What we know is that when babies sleep in the bed with parents, the risk of suffocation and infant death does go up,” Thornton says. “It can be easy to fall in the trap of feeding the baby and then just falling asleep in bed, but we know there can be devastating outcomes to that.”

The Fields family, aware of the recommendations, put a bassinet for Jonah in their bedroom. The couple would both wake up when Jonah fussed, but he was conveniently close by for his overnight feeding.

When Jonah turned 6 months old, the Fieldses transitioned him to a crib, free of any objects that might harm him, in his own room. Aaron would sleep in the guest room, while Melissa would sleep in theirs to maintain normal sleep hours. The monitor would stay with her until Jonah woke up sometime between 3 and 5 a.m., then Aaron would take charge until morning.

“That way I could get a good chunk of sleep without a baby interrupting it on the monitor,” she says.

Babies may wake up due to separation anxiety.

A baby may experience separation anxiety in the period between 6 and 12 months of age. And just like all the other early sleep habits, this too is a phase. How to handle it?

Watchful waiting is an option. This means you may need to allow your baby to cry himself back to sleep. Unless you believe your baby is hungry or uncomfortable, self-soothing is encouraged. If he continues to cry, check on him, speak to him in a calming voice, and then leave the room. Thornton says it can be helpful to come up with a mantra such as “Mama loves you,” and “It’s time for sleep, I will see you soon.” Your reassuring presence may be all he needs to fall back to sleep.

Because newborns enter sleep with an initial period of REM (rapid eye movement) sleep, which lasts around 20 minutes, they may wake easily after hearing a loud noise or just by being placed in bed. That’s because they haven’t yet reached the more restful, deeper non-REM state, explains Herrera.

Newborns spend about equal amounts of time in REM and non-REM sleep, according to HealthyChildren.org, the site of the American Academy of Pediatrics. At this age, babies are easily woken until the latter stages of their sleep cycle, called non-REM sleep or quiet sleep.

To work with this phase of the baby’s life, create an environment conducive to dropping off, says Herrera. Try using pacifiers, white noise, a dark room, or a swaddle blanket to calm and comfort the baby. It’s more difficult to get your baby to sleep if she’s overstimulated.

Thornton adds, “What I will say, when babies and even young toddlers are ready for a deep sleep, they’ll often be able to sleep through.”

Parents should remember the (night) light at the end of the tunnel. It’s there.

Remember that all babies, and parents, go through this, and it will get easier for all of you.

Herrera, a mother of three, emphasizes that parents should have realistic expectations of the sleep patterns of babies. “This will allow (you) to ease up on (your) anxiety over sleep and trust that it will all fall into place eventually.”

Another mother of three, Thornton, says having support can help you get through the toughest times. Both she and her sister-in-law had babies 19 days apart. They would be up at night nursing and texting each other about their fatigue. “You’re not in this alone—lots of other people are doing this and are exhausted,” she says. Thornton encourages parents to reach out to others dealing with the same challenges. Hearing someone else say, “Oh yes, it was a rough night,” can actually be encouraging.

“There have been a lot of sacrifices on both mine and Aaron’s part that we’ve had to make to counter the lack of sleep, but it’s just a stage and we try to keep that in mind,” says Fields. 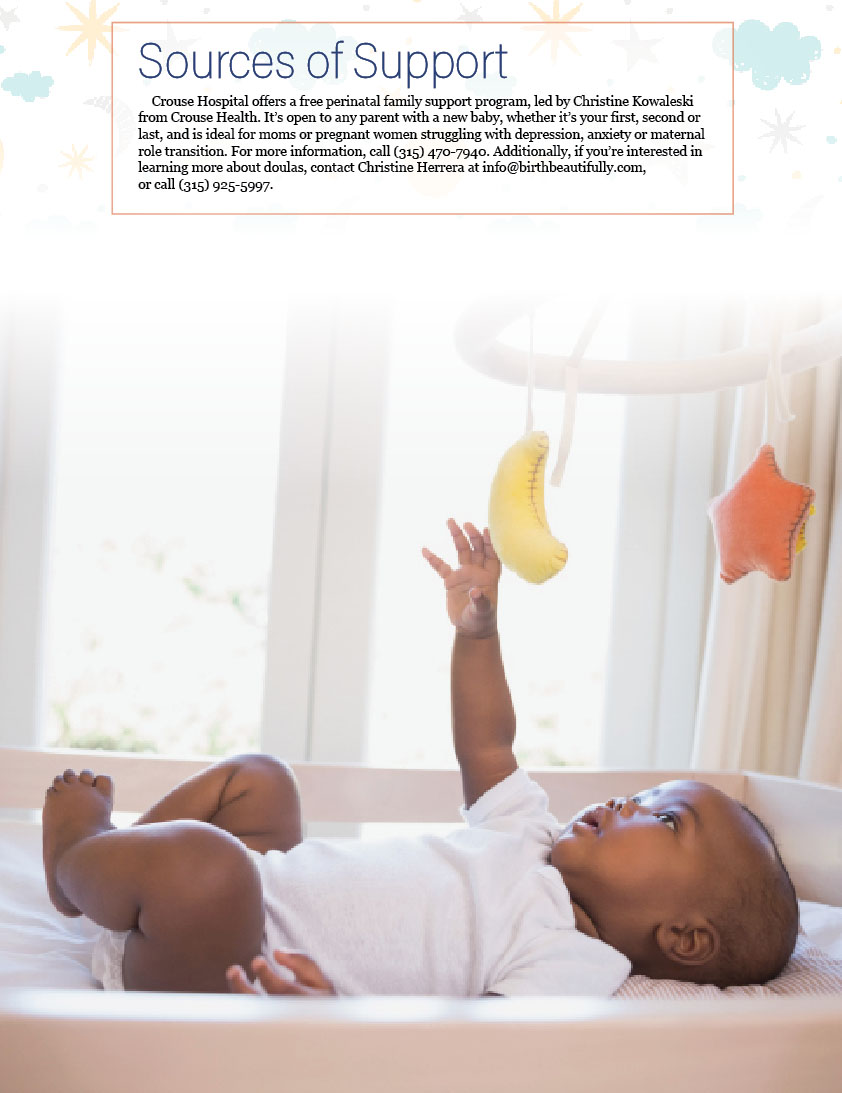 A Surgical Birth: Many pregnant women are likely to deliver by cesarean
It’s Not What It Looks Like: Reflections on motherhood’s changes, outside and inside
To Top