In 1969, a group of Syracuse parents banded together to find an education alternative for their children whose social and emotional needs they felt were not being met in public schools. Fifty years later, that grassroot idea has grown into a 100 teacher, 11 classroom preschool, the Jowonio School. 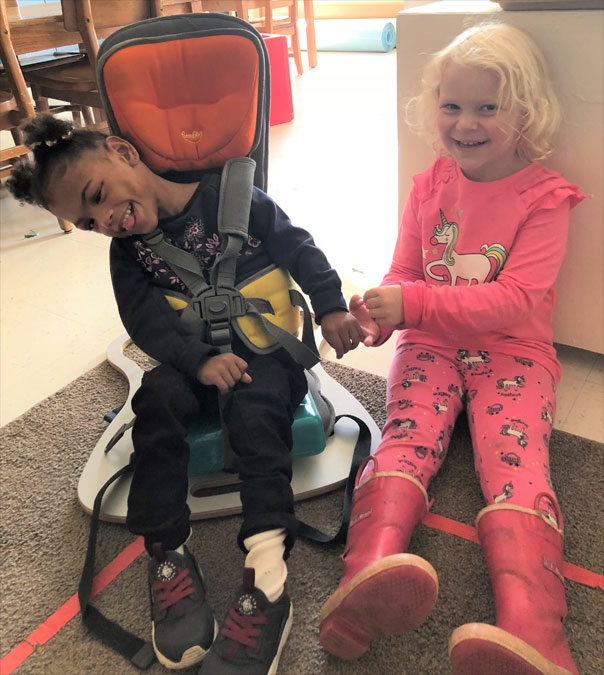 If you’ve driven by the East Genesee Street school and seen the green Jowonio sign, you may have wondered what the name means. It is taken from an Onondaga Nation word that translates as “to set free.” Freedom has everything to do with the school’s mission: “To provide model inclusive programs for young children, where diversity is celebrated and all are free to learn and grow.”

Program Advisor and former Director Ellen Barnes was a Syracuse University student when she became involved in the original parents’ vision for their children’s education. “I was in an undergraduate program in psychology and ended up getting excited about the experience with the families who were putting the school together at that time, and that included Peter Knoblock (now SU School of Education Professor Emeritus) and a number of other parents who were physicians and faculty at SU who were looking for an alternative for their own kids,” she explained.

A New Kind of School

By January 1970, an alternative classroom opened at Park Central Presbyterian Church in downtown Syracuse. The students were between 9 and 12 years old. By the mid-1970s, founding member Knoblock obtained a New York State grant, which allowed the school to serve children with special needs. According to Barnes, the funds allowed the school to hire four people to work with autistic children. The special needs students interacted frequently with the “typical” students, creating an inclusive environment for all.

“When we started doing this thing called ‘inclusion,’ there was no literature about how to do it,” said current Jowonio Director Lori Saile. “There wasn’t research being done about it, and the staff here has really, in a lot of ways, made it up as they went along and figured it out.” 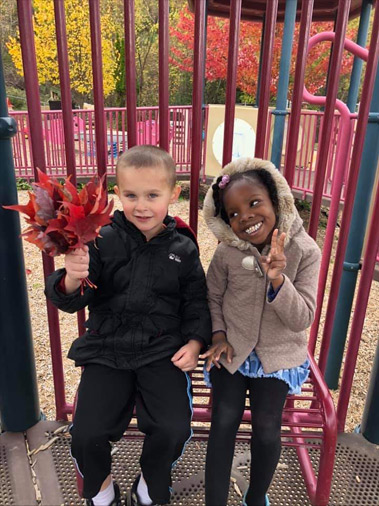 “Families were calling and saying, ‘We’re looking for an alternative for our own kids, will you serve him or her?’” Barnes added. “And when that became clear, that there were families with lots of different kinds of needs that they were looking for support for, the school really expanded in terms of what was available.”

As the New York State Education Department’s emphasis on special needs education developed and progressed, officials in Albany began pressing local public school districts to address those students’ needs. As elementary schools followed suit, Jowonio became a preschool, guided by “the idea that all children belong, regardless of abilities, needs or other factors such as race, family makeup, socioeconomic status or other differences, and that such diversity enriches rather than diminishes the experience of all,” Saile said.

Saile joined the school in the early 1980s. She was placed at Jowonio while taking an undergraduate special education class, and came back later to do her student teaching there. “A position happened to open up in the classroom that I had been placed in as of January [1988], and I rearranged all of my credits and graduated early so that I could stay,” she said.

Also at Jowonio in the early 1980s was Hanah Ehrenreich, who, at three years old, was a student in the Rainbow Room, one of five classrooms which were then located at the former Sumner Elementary School in the Westcott neighborhood. Hanah is now a mother of two; her older daughter, Philadelphia, is a Jowonio student in the Koala Room. “Philly has been on the wait list since I was three months pregnant with her,” she said. “Jowonio’s just very unique and we knew that this was the best place for her.” 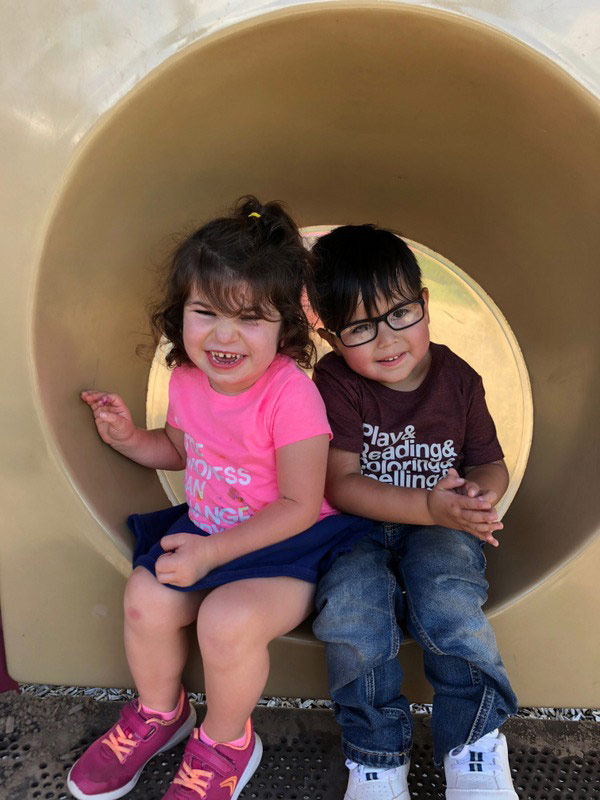 Ann Marie Myers’ son was a Waterfall Room kid. He came to Jowonio with a classification of “preschooler with a disability.” She said the classroom’s design and look created a calm environment for her son. “That room is much more, I’m going to say, muted. It’s still fun but it’s not overwhelming, especially for a kid with sensory needs.”

Jessica and Michael Everson’s daughter, Olivia, also has sensory issues. “When you go into the rooms, you’ll see there’s an area where they can go and calm down if they need to,” Jessica said. “If they need a teacher to come with them, there’s enough of a ratio that they can get that one-on-one time.”

Although Olivia fits the description of a special needs student, with diagnoses including mixed receptive/expressive language delay and motor delay, her father says she has also learned compassion by playing and learning with children with other types of disabilities. “She also became an advocate for other students, like the nonverbal [students] in her class that she advocated for like crazy,” Michael said.

In 2002, the Jowonio School moved to a new, bigger location on East Genesee Street. Over time, as other tenants of the building have moved out, the school has expanded – more classrooms, space for five speech therapists and an occupational and physical therapy area that resembles a colorful gym, with plenty of mats, padded climbing structures, swings and cloth tunnels.

A peek inside any of the classrooms, all named for animals and nature’s wonders, might show a circle of children doing parachute play with a teacher. You might also see children climbing a ladder to the top of a wooden structure that serves as both a reading loft and a playhouse underneath. Standing at sensory tables, kids might be kneading clay or running their small hands through sand. You would see students using American Sign Language to ask teachers for a cup of water or a bathroom break.

Saile said that the school’s staff have a strong, shared vision of the ways in which children with many different learning styles, needs and gifts have a right to a rich, developmentally appropriate school experience. They offer all students accommodations that may include individualized visual schedules, sensory diets, adapted seating or mobility aids to augment communication, such as sign language or iPads. 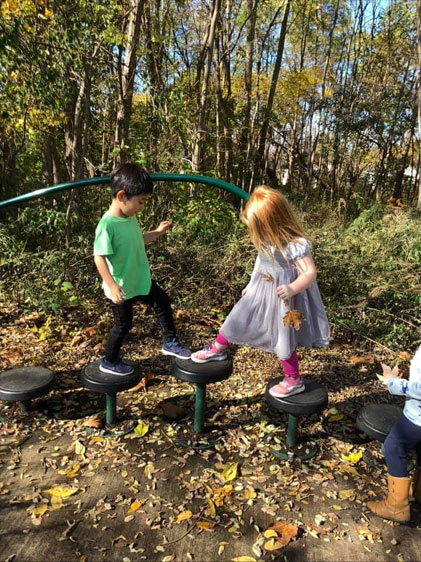 Although she taught at Jowonio for eight years after joining the school, Saile left for several years to teach in the Fayetteville-Manlius school district. She is grateful for that experience and believes that sharing the skills she learned at Jowonio in another setting had a positive impact in the classes she taught.

“But it wasn’t home,” she said. “And so, four years later, I came back because this is really home and this is teaching and collaborating and relating to kids and to one another as adults in the way that I would love the world to be.”

History of the Jowonio School

Since 1969, Jowonio School has provided Central New York children with quality inclusive education. Here is a brief timeline of events that led up to the school’s 50th anniversary celebration.

1974-75 – Peter Knoblock, one of the founding parents and a professor in Syracuse University’s School of Education, received a state grant to serve children with special needs. He placed that classroom in the same building as Jowonio. Children from the two different programs routinely visited each other’s classrooms, creating an inclusive environment.

1976 – The Education for All Handicapped Children Act, also known as Public Law 94-142, was approved by the U.S. Congress and passed into law. It guaranteed “free, appropriate public education” to all children and young adults ages 3–21. That same year, Jowonio began receiving tuition from the New York State Education Department to serve children with special needs, as well as a federal grant to pilot an inclusive model of education.

1977 – Jowonio received a state charter and moved into the former Sumner Elementary School on Bassett Street in Syracuse’s Westcott neighborhood.

1981 – School Director Peter Knoblock handed the reins over to Ellen Barnes, who was appointed director of Jowonio after doing research at the school for her doctorate program at Syracuse University. That same year, Jowonio began a pilot inclusion program in one classroom in the Syracuse City School District, at Salem Hyde Elementary School. After two years, the district adopted and took over running the program and expanded it to Edward Smith Elementary School.

1983-84 – A federal lawsuit determined that home school districts were the “least restrictive environment” for children with special needs, and mandated districts develop programs to serve school-aged children within their home districts. Jowonio was no longer able to directly serve school-aged students with special needs. The school became an inclusive preschool at that time.

Late 1980s – Jowonio expanded its programming to include ENRICH, a home and community-based option in which Jowonio teachers and therapists went into homes and child-care settings to support children in their natural environments.

2001 – Friends of Jowonio established a parallel support organization to begin a capital campaign to purchase a new building for the school.

2002 – Friends of Jowonio purchased the building at 3049 East Genesee Street in Syracuse. Input from brainstorming sessions with staff was incorporated into the designs for extensive building renovations. The school moved and opened in the new building in September 2002.

2018 – Ellen Barnes began her role as Program Advisor and Lori Saile was named Director of Jowonio.