She survived battles with breast cancer and a type of acute leukemia, the second of which Bethea says “catapulted me to death’s door,” before being diagnosed with Myelodysplastic Syndrome. After Bethea went into remission for a third time, her doctor recommended a bone marrow transplant. Though she was unable to find an adult donor match, she did find one at a public cord blood bank.

“At that point, it became an issue of what they would have to do to me in order to give me the transplant because I had been through all this other chemotherapy,” Bethea says. “I was a difficult case.”

Despite the risks, she was successfully transplanted with that cord blood donation.

That was in 2007. Today, Bethea – who lives in Wilmington, North Carolina – is an advocate for cord blood donation, leading an organization called Driving for Change.

“I’m trying to help mothers be aware that when [the umbilical cord] went into the garbage, it still had life in it,” she says, “And that is what I’m living off of.”

What Is Cord Blood?

Typically discarded after birth, the blood in the umbilical cord and placenta contains stem cells. Those cells can then be used to treat more than 80 diseases, including leukemia, lymphoma and other blood disorders. Unlike adult stem cells from bone marrow, there does not need to be a perfect match between the donor and the recipient, increasing the chances of finding a match. Cord blood is also being used in research for treatment of diseases ranging from cerebral palsy to autism.

The first cord blood transplant was performed in 1988. Since then, more than 25,000 patients have benefitted, according to the National Marrow Donor Program’s website (www.bethematch.org).

+ Typically discarded, blood remains in the umbilical cord and placenta after a baby is born
+ That blood contains stem cells, and it can be used to treat more than 80 diseases
+ Unlike other types of cells, stem cells are able to self-replicate
+ Donating cord blood is not controversial; there are no embryonic stem cells involved
+ Though cord blood can be used for adult transplants. it is most commonly used in children
+ The top use of cord blood is transplants for blood cancers
+ The unit must meet standards set by the Food and Drug Administration and New York State of Health, and contain a certain number of stem cells

For the Upstate Cord Blood Bank staff, one of the biggest challenges so far has been changing the culture around cord blood donation. Business Manager Ann Marie Straight says since cord blood donation has not been an option for the region, most people (mothers, providers, nurses etc.) don’t think about it.

“That has been our biggest achievement; I think we actually have changed the culture here at the Upstate Family Birth Center,” she says. “We gave every nurse a tour of our facility and then they understood what we were doing. We want to try to put that awareness out into the community so that they understand. Each cord blood donation could save a life, why throw it out?”

The Upstate Cord Blood Bank currently receives cord blood from two hospitals in the area – Upstate Community Hospital, where the facility is located, and Crouse Hospital – and is working to add St. Joseph’s Hospital. They also hope to eventually expand to private banking, which families would pay for.

“It makes sense, business-wise, to reach out into both of those worlds and provide that service to the community,” Straight says. “A mom who wants to donate to a family bank, it would be nice if they could just do it right here versus sending it out to Arizona or Kentucky. There are places all over. Having it right here [in Syracuse], you know where it is.”

Straight says that, as of December 31, 2019 more than 820 families have donated to the Upstate Cord Blood Bank. Meghan Shea-Frederick is one of those donors. While she was pregnant and working as a nurse in the labor and delivery unit at Upstate Community Hospital, Shea-Frederick heard about cord blood donation and its benefits. 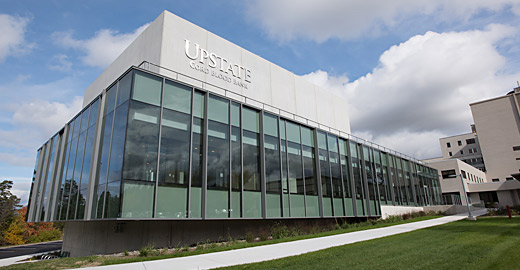 “One of the main reasons I ended up donating is because I actually knew about it,” Shea-Frederick says, adding that her dad had leukemia as a child, which also played a role in her decision.

When a mother chooses to donate, she must fill out a consent form and a health history questionnaire, and let her provider know about her plans. Because it is a public bank, there is no cost for the donor.

After the provider has clamped and cut the cord, the blood – approximately five ounces or a half-cup – is collected. Mothers are still able donate if they have a C-section or opt for delayed cord clamping, as long as their provider follows the guidelines set by the American College of Obstetrics and Gynecology. The entire collection process takes about five minutes.

“You don’t feel a poke; you don’t feel anything,” Shea-Frederick says. “You’re not even really aware that they’re collecting it.”

When it arrives at the Upstate Cord Blood Bank, the cord blood is assigned a unique identifier, processed, and placed in a container about the size of a cassette tape. It is also tested for contamination and cell count. If the cord blood doesn’t meet the standards for transplant, it can be used for research. Otherwise, it is stored in a tank filled with liquid nitrogen until needed. Each tank is able to store 3,600 units of cord blood, and the number of donations the facility receives per day varies.

“It was easy,” she says. “I just filled out a couple health questionnaires, and in the end, the unit can be useful, if not for me, for someone else in the future to help cure diseases. It’s a small thing we can do now that I would do over again.”