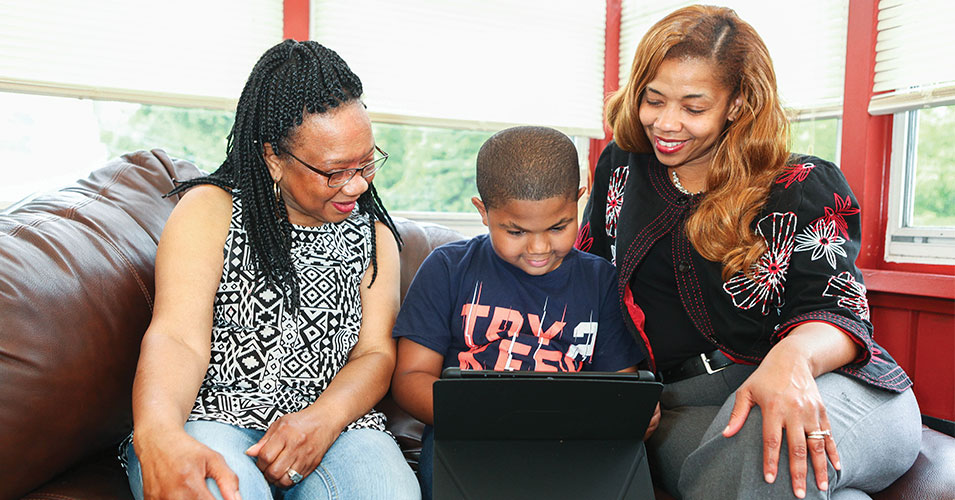 Many adults have become the ultimate caregivers. They are members of what is known as the “sandwich generation,” raising young children, financially backing grown children, and providing care for their own parents, who are living longer and need assistance.

The burden is heavy. All look to this generation for support. In 2013, the Pew Research Center found nearly half of those in their 30s and 40s are in this situation. Knowing when and where to turn for advice and guidance for seniors can be overwhelming.

Although people often automatically think of nursing homes, there are actually many options. And everything from insurance advice to caregiver classes is as close as your county’s office for aging.

“We don’t want what we do to be a best-kept secret,” says JoAnne Spoto Decker, director of community service programs for the Onondaga County Department of Aging and Youth.

Spoto Decker’s office aims to help keep senior citizens at home and out of institutions for as long as possible. Phone and in-home consultations are conducted to look at specific needs and assist with transitions.

For caregivers and senior citizens, Spoto Decker suggests first taking an inventory of what’s already in place and planning ahead.

“Resources play a big role. For example, Medicare doesn’t usually pay for long-term care. I think people need to be educated on what is available and who will pay.”

Does the senior have a power of attorney, healthcare proxy or a living will? These forms are free and can be found through ongov.net using the “search” function. The forms give caregivers specific directions about senior citizens’ wishes. 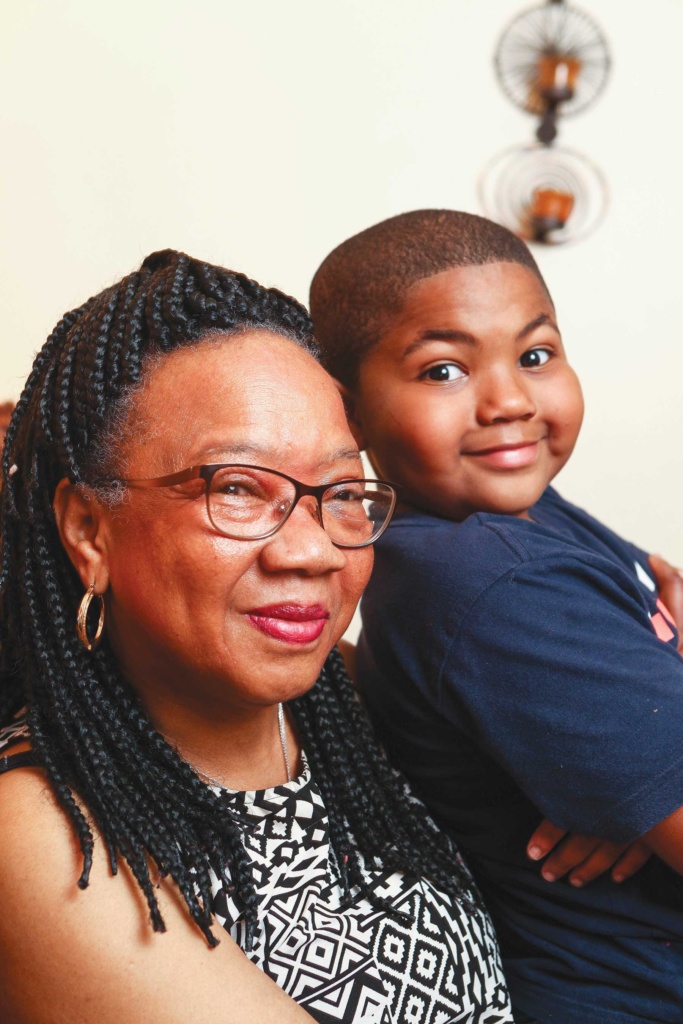 Faith Johnson, who lives with the family of her daughter, Elaine Williams, is pictured with her 6-year-old grandson, Jonathan. (Michael Davis/Family Times Magazine)

Support for a family

For some elderly people, family is the only support they need. One such household is that of Elaine Williams, a 45-year-old probations officer, her husband and her three youngest, school-aged children.

Five years ago, her mother, Faith Johnson, now 68, moved from New York City to live with them in Syracuse. Williams sought additional support so her mother could be active and engaged during the day, when other household members were away. “I didn’t want her to sit here and be bored,” she says.

A friend of hers at the Office for Aging directed Williams to different programs. Williams and Johnson scheduled a visit to Loretto’s Daybreak, a medical day program for those age 21 and up who have a medical condition and need assistance.

Related: Mother Knows Best: Yes, of course your mom really does get it

It was an easy decision. Johnson has been going several times a week since then and enjoys it. Both women like the idea of having nurses on staff, especially because diabetes and vision problems can require interventions. “I know if my blood sugar level is low, they check it,” Johnson says.

The program also offers healthy meals and provides transportation. It takes participants to doctor’s appointments, and its schedule includes outings for shopping, live music and bowling.

The program also meets social needs. When Williams mentions a gentleman at Daybreak who may be more than a friend, her mother giggles like a schoolgirl.

Other senior citizens need residential services, and housing can have all the benefits of independent living without the hassles of upkeep.

In a cozy corner apartment overlooking Lake Ontario, Paul and Sue Raymond, 78 and 76, respectively, live among an extensive collection of cow-themed objects and paintings.

They raised a family in a six-bedroom farmhouse with 400 acres of land and more than 200 cows. But eventually the demands of the dairy industry were unsustainable for them, and they sold their property.

Paul Raymond acknowledges the change came at the right time. His health was declining, and the features of senior living appealed to the couple.

Sue Raymond says, “It was hard to go from doing whatever we wanted to having to follow rules,” but they still had their own space.

The building is secure and has elevators. There are no homeowner responsibilities. Any household problems and repairs are handled by an on-site maintenance worker.

Their daughter, who works full time and is a mother to twins, lives close enough to have them over for meals. She can also bring them groceries—or Sue can take a bus to the store.

“We can have restaurant food delivered and the drugstore delivers, too,” Sue says. “You wouldn’t have all that in a nursing home.”

The Raymonds have been happily married for 58 years. Sue helps Paul with most of his daily activities and admits her body doesn’t move as easily as it once did.

When asked if she feels it was a good decision to move, she thinks before answering, “It’s still a yes and a no.” It’s been almost three years but she still misses her own home.

The Raymonds’ suggestions for others, however, are definite: “It’s important to get the paperwork done whether you have family or don’t.” They believe their choice to scale down and adjust their investments early enabled them to prepare for the uncertainties of depending entirely on government benefits.

Another couple didn’t get to move to a senior living complex on their own timetable. Ginny and Chuck Congdon put their names on the wait list of a senior apartment complex in 2005. An apartment finally became available in 2008, a year after Chuck died. Ginny Congdon moved anyway, and now a description of her weekly activities sounds more like college dorm life than senior living.

At 79, she exercises at least an hour a day, volunteers at a local food pantry, and is on the Sunshine Committee to welcome new tenants. Her evenings revolve around games and events. “Everything is close by,” she says. “There’s so many things people could get involved in.” After working all her life and caring for her husband, she takes advantage of everything that’s available.

When a shift makes sense

Health changes are usually the precipitating factor for evaluating living situations. Marty Pond, a registered nurse who specializes in geriatrics, has been with St. Joseph’s Hospital Health Center for 29 years.

She’s seen patients and adult children struggle with what to do after an illness or injury. They are referred to their county’s Office for Aging. She advises that senior citizens and their children should make their plans while they are healthy.

Pond encourages family meetings so everyone can to talk openly about the situation. “As we’re living longer with more chronic diseases, it all comes down to quality of life. No one plans on a nursing home so ask what they have in mind.”

She suggests spending an afternoon visiting senior housing and assisted living facilities. “Make it a fun day; see a few, go to lunch, see a few more.” If there is an opening and the seniors don’t feel it’s necessary to move just then, they can simply decline. 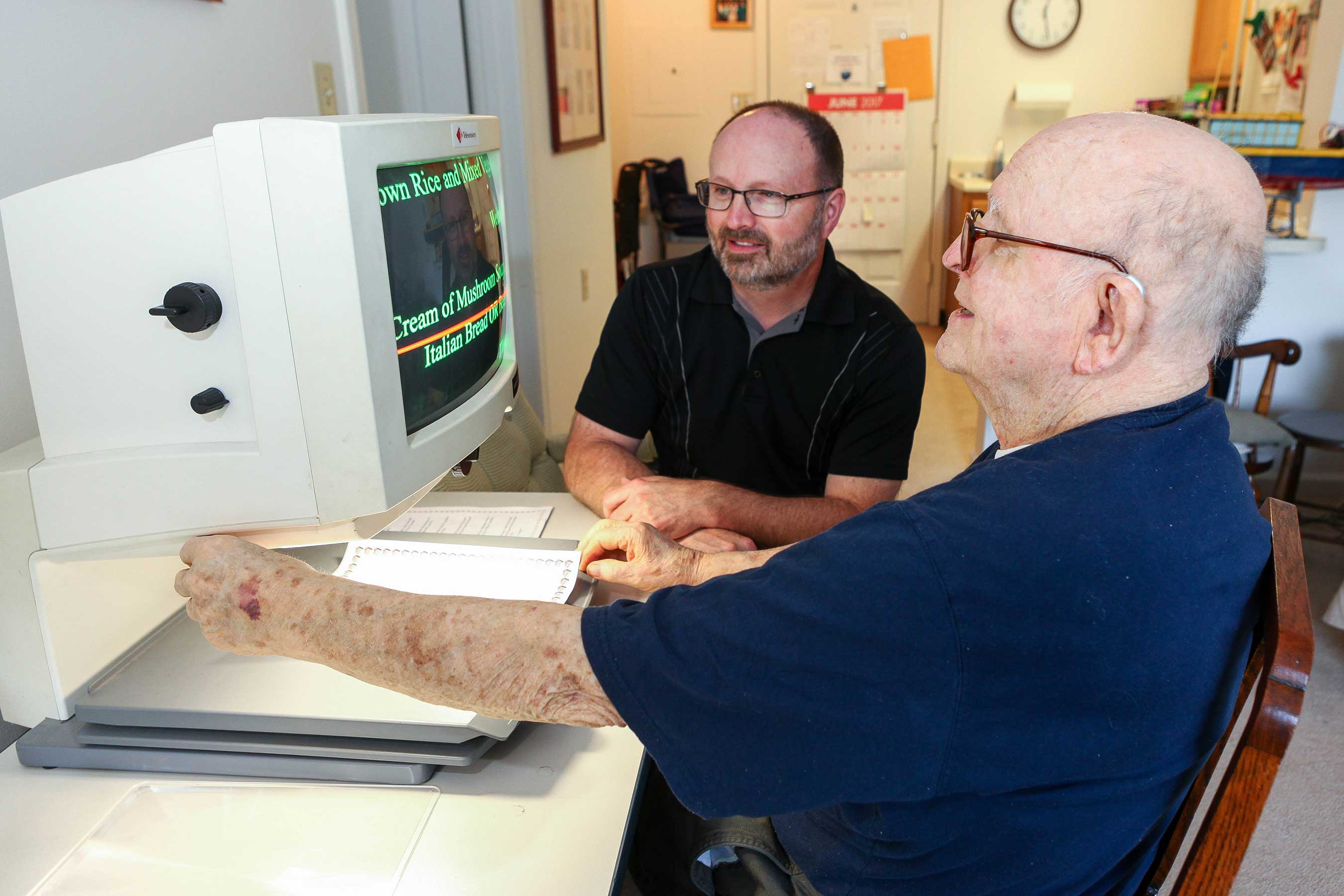 Dick Barry, 91, lives at the Hearth at Greenpoint. In the photo, he’s showing his son Mark Barry a new technology for enlarging text to help him read more easily. (Michael Davis/Family Times Magazine)

Adding to support over time

Some adult children can gradually increase support for their aging parents.

“I’m running out of gas,” 91-year-old Dick Barry says with a smile. He had been living on his own in a condo up until about two years ago. No longer driving, he depended only on his family to bring him what he needed. Then he started falling and losing consciousness. Sometimes it was because he wasn’t remembering to take his medication properly; other times it was dehydration.

He and his six children knew he needed additional attention they couldn’t give, since they have jobs and kids at home. At first, they hired a helper for chores and a few hours a week of companionship. Unfortunately, Barry fell while out doing errands and sustained a blow to his head. He had to visit the hospital, and his family members realized he needed a higher level of care. It was no longer feasible for him to live alone and none of the family could safely take him in.

“None of our homes would work, we all have stairs,” says Mark Barry, 53, Dick’s oldest child. The hospital gave a list of places to consider. Mark and his siblings decided on the Hearth at Greenpoint in Liverpool. This assisted living facility would allow their father to have his own apartment but would provide meals and dispense medication.

“I didn’t want the kids to have to deal with it. I knew it was time to go,” admitted Dick. “At first I was disenchanted; it’s not home, but (the staff) come in to my room to clean and help with whatever I need.”

Now he has three full meals with balanced nutrition, and eats with other residents instead of alone. He’s also on appropriate medication for his needs, and he and his family believe he is doing well.

When asked about the future, Mark says he thinks Greenpoint will be able to support Dick Barry as he ages. “They have separate buildings for dementia patients and also a nursing home.”

For now, Mark needs to manage only his father’s finances but says there are fewer concerns about safety. And he can stop over anytime to visit Dick on his lunch hour and add the occasional app to his dad’s iPad.

Even though finding appropriate housing is one of the biggest struggles adult children and senior citizens face, there are other concerns. The Onondaga County Office for Aging has numerous resources. Many of these programs are federally funded, making them based on need rather than income.

The office conducts an extensive assessment before suggesting suitable resources. The Office for Aging can, for example, direct people to in-home care and utility assistance, nutritional needs and senior centers. Community service programs consist of social work and legal services. There’s even guidance for seniors seeking education or employment. Such resources can begin to provide peace of mind for both senior citizens and their adult children.

What to do when your child wants to be a vegetarian
Fit After Baby: 5 tips and trends to lose baby weight
To Top