Third-grader Abby Grzesik knows exactly how many days she was absent from school in 2018-19 (only missed one week), just how much her subtraction skills improved in Quarter Four (from a score of 63 to a high of 100), and how many days this school year she has read on her own (seven days a week each month, except for one week in December 2018, when she only read five days).

Abby and her fellow students at Oswego County’s Palermo Elementary School keep track of their attendance and progress in reading and math in what are called their Leadership Notebooks. Their school uses them as just one part of a model called Leader in Me, a type of curriculum that encompasses academics, school culture and life skills. Through this model, the students learn to practice habits and principles that can earn them leadership roles in their classrooms and schoolwide.

One day last June, near the end of the 2018-19 school year, I visited Palermo Elementary to learn about the program and talk to students, teachers and administrators about how they use it. (All students’ grade levels in the story were as of June 2019.)

“We keep track of our data in our binders at the student level and then we keep track of our class data, of how our class is doing and then we do some schoolwide displays,” Principal Peggy Scorzelli explained. She said that the notebooks are also where students can write about the roles they play in the school community. “Some teachers have them reflect on the classroom job that they do, that they signed up for.” 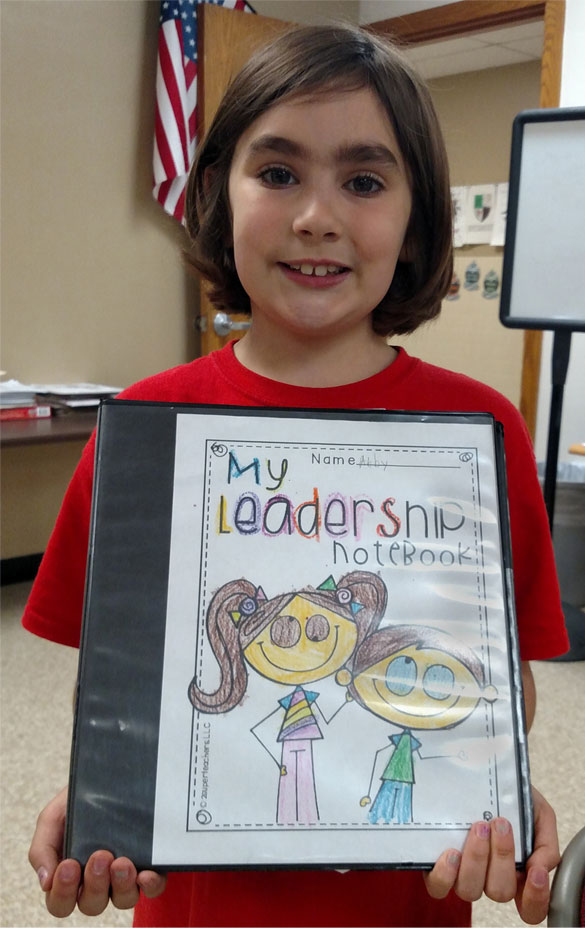 Palermo Elementary is a pre-kindergarten through fourth grade school in the Mexico Academy and Central School District. Students begin learning the Leader in Me principles, habits and roles in pre-K. “We’re doing synergy,” said third-grade teacher Megan Cernaro. “So what does that really mean? It’s just that teamwork. When they first learn the habits, when they’re little, the synergy is teamwork, or really, it’s building on each other’s strengths and using that for the better, for the good as a whole.”

In her classroom, Cernaro’s students have assigned, applied-for leadership roles such as being class greeter or morning meeting facilitator. “It’s them owning and feeling that’s it’s not just the teacher’s classroom or it’s not just the educators’ school. It is ours together.”

The  process was adapted for educational settings from the 1989 book 7 Habits of Highly Effective People, by Stephen R. Covey. 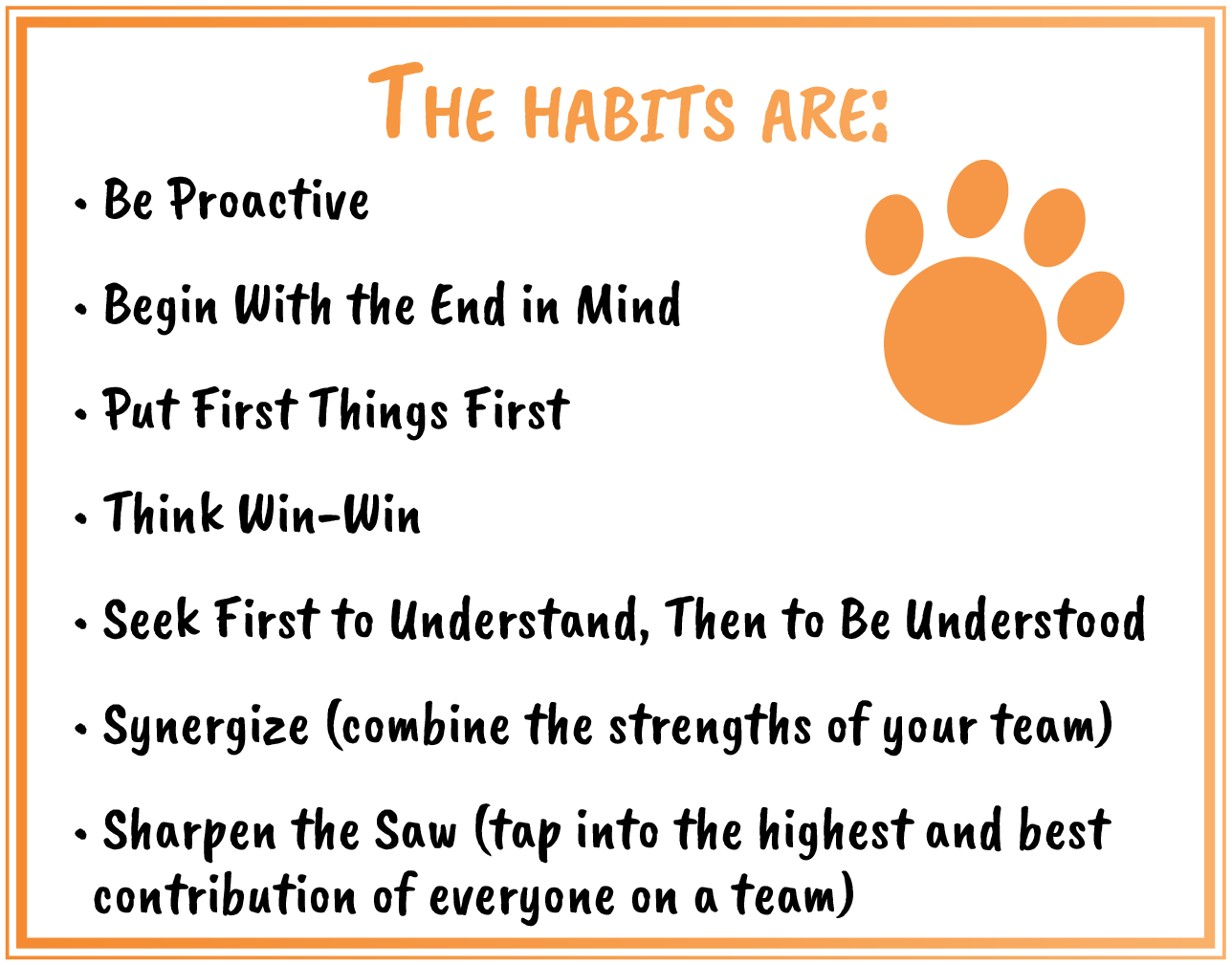 The first school to adapt and use the Leader in Me process was A.B. Combs Leadership Magnet Elementary, a public school in Raleigh, North Carolina, in 1999. Since that time, thousands of Leader in Me schools have been established in more than 80 countries.

Over the past several years, Palermo Elementary has earned the Leader in Me Lighthouse Schools certification, administered by Franklin Covey, a time management training and assessment services company that formed when the Franklin Quest company acquired author Stephen R. Covey’s Covey Leadership Center. Being a Lighthouse School means Palermo has “produced outstanding results in school and student outcomes.”

“There’s actually a rubric that we had to evaluate ourselves on and then (Franklin Covey representatives) came and they interviewed parents, students and staff,” Scorzelli said. “We’re so fortunate that we have this milestone in our journey.”

Lighthouse Schools have both faculty- and student-level teams. Student Lighthouse Team members have schoolwide leadership roles. One of the roles is running assemblies during the school year, which student team member Rylee Smith enjoys doing.

“‘Lighthouse’ means we stay after school and you have a meeting and you talk about Funtabulous Friday and what we’re going to do, and then you work together,” said Rylee.

Rylee’s teammates rotate their roles in planning the weekly Funtabulous Friday assemblies. “Wednesday is when we assign the jobs that we need to do, and then Thursday we practice,” explained Madison Hopp, a fourth-grader.

The assemblies require the team members to come up with games for students to play. There’s a team within the Student Lighthouse Team called the Beat the Clock team. “If you’re on the Beat the Clock team, you synergize and think of a game and then try to explain and make up how you’re going to explain to the audience what they have to do,” said student team member Mackenzie Hopp, Madison’s twin sister, also in grade 4.

Robert Teifke, a teacher and the student team co-facilitator, gives the group feedback on their plans and ideas, but he lets the students take the lead. “I try to step back as much as I can,” he said. “I’m there for support and guidance, but we really push for all of the ideas and the creativity to come from them.”

Her class also does “secret kindness missions” for which they brainstorm ideas in their class meetings. “Right now their mission is to greet people that they may not know,” Cernaro said. “We talk about how you may be the one person that says hello to that person all day.”

Student Lighthouse Team member Lily Sanschagrin offered her definition of leadership: “Being a leader means you are proactive and if you see someone that is bullying someone, you will help them to stop getting bullied,” she said. When asked what she might say to the bully, Lily answered, “You can say ‘It’s not nice to bully people,’” a true statement that is not punitive or aggressive.

Abby Grzesik shared her advice on what other kids her age can do to stay focused on their educational and character goals, using the habit of putting first things first. “You try to set aside, as we think of it, bigger rocks, the more important things, and smaller rocks, the less important things, like video games and reading if, like, you’re reading comic books or something that’s not for school,” she said. “So I would say if they need tips on how to keep on track, make a chart and have your mom help you.”

Wise words from a third-grade leader in the making.

Let’s Get Together: Remaking classrooms so all students are included
Allergy Adjustments: Parents can support their food allergic child
To Top