Alita of Alita: Battle Angel is a creation from an age of despair. Found by the mysterious Dr. Ido while trolling for cyborg parts, Alita becomes a lethal, dangerous being. She cannot remember who she is, or where she came from. But to Dr. Ido, the truth is all too clear. She is the one being who can break the cycle of death and destruction left behind from Tiphares. But to accomplish her true purpose, she must fight and kill. And that is where Alita’s true significance comes to bear. She is an angel from heaven. She is an angel of death.

KIDS FIRST! Film Critic Rohan F. comments, “Alita Battle Angel is an epic, action-packed film. It has incredible CGI and accomplishes lots of world-building. It is based on the Manga series Battle Angel Alita by Yukito Kishiro.” Ivey H. adds, “This story empowers us young ladies. She is brave, strong through rough times and proves people wrong. I really felt the emotions and turmoil of this coming of age tale of Alita.” Siaki S. sums it up with, “I really like this film because, even though Alita is a cyborg, that doesn’t stop from her from doing everything she can to make her discover who she actually is. Although she is a machine, she is still treated as if she is a human being.”

See their full reviews below:

Alita Battle Angel is an epic, action-packed film. It has incredible CGI and accomplishes lots of world-building. It is based on the Manga series Battle Angel Alita by Yukito Kishiro.

When Doctor Ido finds a living machine in the scrap yard, he takes it back and calls it Alita. When she wakes up she realizes all her memories have been lost. She finds herself in a crazy world in Pig City, beneath the last floating city.  She tries to restore her memory and makes some friends and even more enemies. While it’s an interesting story, I feel like it’s not the focus of the film. Instead, the focus appears to be the battle scenes, because there are lots of them. While being beautiful and entertaining, I feel many were unnecessary.

I really liked the fight scenes. The unique fighting style used by Alita makes them interesting to watch. The CGI is incredible. I almost forgot Alita is a CGI character because of all the facial detail.  The sport Motor Ball is unique and explained quite well. I found the ending left me wanting more. The character design in this film is wonderful. All the different androids are visually impressive. They are so unique. You can tell what they can do just by looking at them. The sets are also very well designed and stick to the theme. The floating city is very intriguing. I enjoyed how they explained little bits of it. However, this movie feels like a long setup for a sequel.

The moral of this film is to not stand by while people are being hurt – to speak up in the face of injustice. Unfortunately, although this message is spoken a few times, it isn’t communicated very well throughout the plot of the movie and seems a bit like an afterthought.

The music is great. I enjoyed it without being distracted by it. It varies in each scene but keeps to a coherent theme throughout the film. My favorite scene is when Alita goes into the hunter-warrior bar and tries to recruit people. This scene is very entertaining to watch and is choreographed brilliantly. It also introduces a bunch of interesting hunter-warriors. They all have entirely different fighting styles which makes this scene interesting to watch. I give this film 4.5 out of 5 stars and recommend it to ages 11 through 16. It opens February 8, 2019 so look for it. 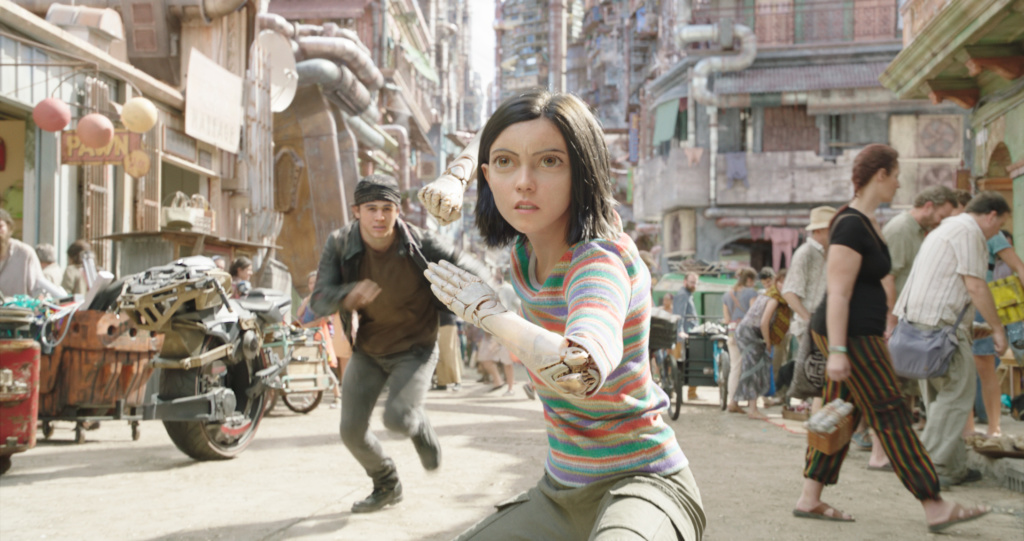 This is an extraordinary animation film by James Cameron about a young girl who has forgotten her past and is trying to find herself.  This story empowers us young ladies.  She is brave, strong through rough times and proves people wrong. I really felt the emotions and turmoil of this coming of age tale of Alita.

This story is set in the future, after terrible devastating world event. It is about two worlds, one above and one below. It is action packed with villains and heroes. Alita is found by a cyborg Dr. Dyson Ido (Christoph Waltz) in a junkyard. He refurbishes her into a cyborg part-human and part-machine. The young Alita is trying to figure out her past. Meanwhile, she discovers her hidden abilities to transform into an elite fighter, athlete and warrior. She never looses heart, as she becomes a young woman and haves to deal with several conflicts.

The film is directed by Robert Rodriguez and written by James Cameron, a creative genius who is known for many other films such as Titanic and Avatar. The lead character, Alita is played by Rosa Salazar. Rosa truly takes you through the emotions of her character.  Alita’s human sidekick, Hugo, is played by Keean Johnson. He is her teenage first love.  The villains are played by Mahershala Ali and Jennifer Connelley. Ed Norton makes a cameo appearance at the end which makes me believe there will be a part two and we will see more of him.

The CGI and F/X in this film are so vivid and realistic. It is hard to tell animation from reality.  The cyborgs’ transformer bodies are so creative and the costumes really bring light to the characters. The music, lighting and scenes are enhanced by the 3D movie theater experience.

My favorite part is when Alita gets a new robotic body and is better than ever. It suits her. I also like when she decides to start a fighting league of her own. She signs up to be a bounty hunter,  then tries to rally other bounty hunters. They do not take her seriously, but they will soon learn she is a force to be reckoned with. The bounty hunter Zapan (Ed Skrein) and the bounty hunter that loves dogs are pretty cool characters.

The message in the film seems to never give up, even when the odds are against you. Never let anyone tell you who you are or who you should become. I really relate to the story line and it made me to want to be the best that I can.

I give this film 5 out of 5 stars and recommend it for ages 13 to 18 due to adult language and violence content. Adults will also enjoy this film. This film opens in theaters February 14, 2019. Look for it. 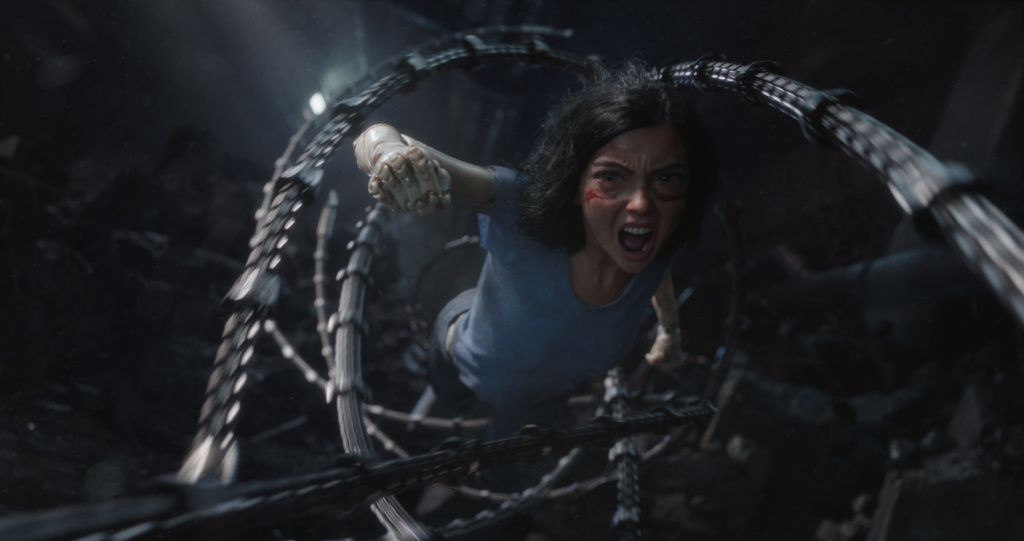 I really like this film because, even though Alita is a cyborg, that doesn’t stop from her from doing everything she can to make her discover who she actually is. Although she is a machine, she is still treated as if she is a human being.

This amazing film is directed by Robert Rodriguez who also shoots, produces and scores many of his films in Mexico, as well as his home state, Texas. Rodriguez directed the 1992 action film El Mariachi, which was a huge commercial success.  The story line here follows the one and only Alita, who is found in the scrap yard and taken to a nearby clinic by Dr. Ido who repairs all cyborg visitors. As Alita awakes, she has no memory of what happened, where she is or even who she truly is. As she explores the world little by little, she has minor memory recall about who she really is.

The more Alita experiences her present life, she meets a lot of people who are just like her. Dr. Ido tries his best to keep her safe from any bad things coming into her life.

The main characters in the film are played by a veritable who’s who of talent: Alita is played by Rosa Salazar (Parenthood, American Horror Story). In Rosa’s portrayal of Alita, we see that she is more than just a machine; she is also a warrior. Hugo is played by Keean Johnson (Heritage Falls), who really portrays Hugo as being a really cool and trustworthy guy. Dr. Dyson Ido is played by Christoph Waltz (Spectre). Waltz really surprised me in this role which suits him well. Plus, even though he is older, he still has great moves. Chiren is played by Jennifer Connelly (Only the Brave, Spider-Man: Homecoming, Winter’s Tale). Connelly shows us what an interesting character Chiren is and contributes to the idea of how she doesn’t look bad, but actually is.  Mahershala Ali plays Vector. This character is quite different in how he communicates with the headmaster of Iron City, which is why people obey him. Ed Skrein plays Zapan as very intimidating, because of how he roams the streets as a big tough guy. You do not want to mess with him.

The sets are pretty cool. I like the set at the local plaza where Alita first learns to play the game motor ball. I also really love the music in this film because, depending on the scene, the music changes within it and drives the story line alone. The costumes are quite amazing and different. They aren’t like the usual bad guy costumes. They are enhanced with CGI, which makes them quite tremendous.

My favorite part of the film is when Dr. Ido comes to find Alita in a bar, where she is challenging hunter-warriors to fight with her if they lose. In between all of the chaos, Dr. Ido shouts “Stop it, Stop it right now!” Yet, no one listens to him until he says, “Or no one gets free repairs!” In less than a second, everyone releases each other from the chaos.

I give this film 5 out of 5 stars and recommend it for ages 12 to 18, as well as adults. I think that everyone watching this will enjoy all the good reaction parts as well as jump scares. It opens in theaters February 14, 2019 so look for it.

Review | ‘LEGO Movie 2’ is a genre-defying blast thanks to voices, writing
315 Bulletin
To Top