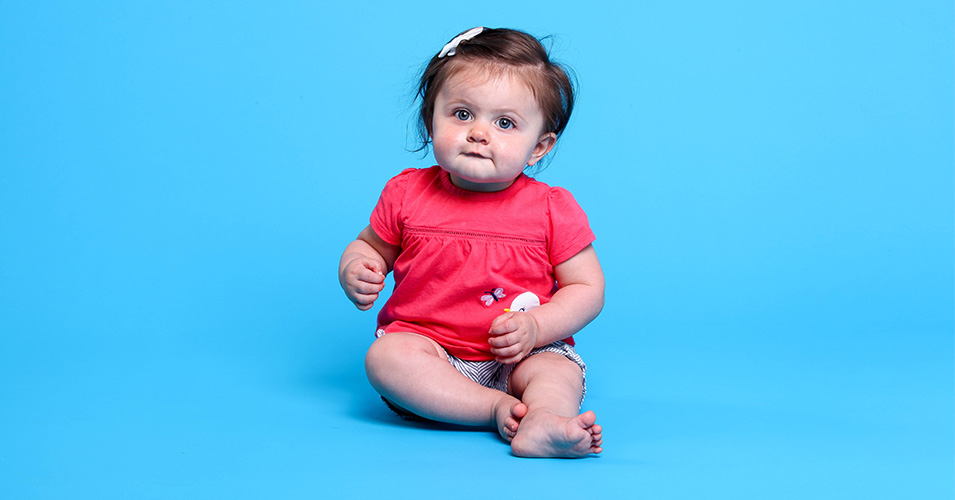 Carrie and Stacy Portzline-Large were married in September 2012 and soon after began to discuss having a family.

They decided to go with the fertility procedures IUI — intrauterine insemination — and IVF — in vitro fertilization. Lucas was conceived via IUI, using a sperm donor and Stacy’s egg, and was born in May 2015. Callie, born last October, was conceived through IVF, which allowed for Carrie’s egg to be combined with sperm from the same donor and implanted into Stacy’s uterus. Carrie and Stacy underwent their IUI and IVF processes at CNY Fertility Center.

Family Times got together with the couple to learn about their family. (This interview has been edited and condensed.)

Talk to me about your relationship. How did you two meet?

Stacy Portzline-Large: Through my sister. She had asked me to sub on her softball team, and they would always go out after the games. We just started talking and hanging out and getting to know each other better. We started dating about a year and a half after we met.

Carrie Portzline-Large: She couldn’t resist me.

How old were you when you met?

Carrie: We got married at the New York Wine and Culinary Center. That’s where I proposed to Stacy. We did the traditional stuff. Both of our fathers walked us down the aisle and we both had the father-daughter dance.

When did each of you think of having children?

Carrie: Stacy didn’t come out as early as I did, so I never thought I would be able to have kids because of who I am. After meeting Stacy I decided, yes, I would want to have a family with her.

When did you start to discuss having children together? 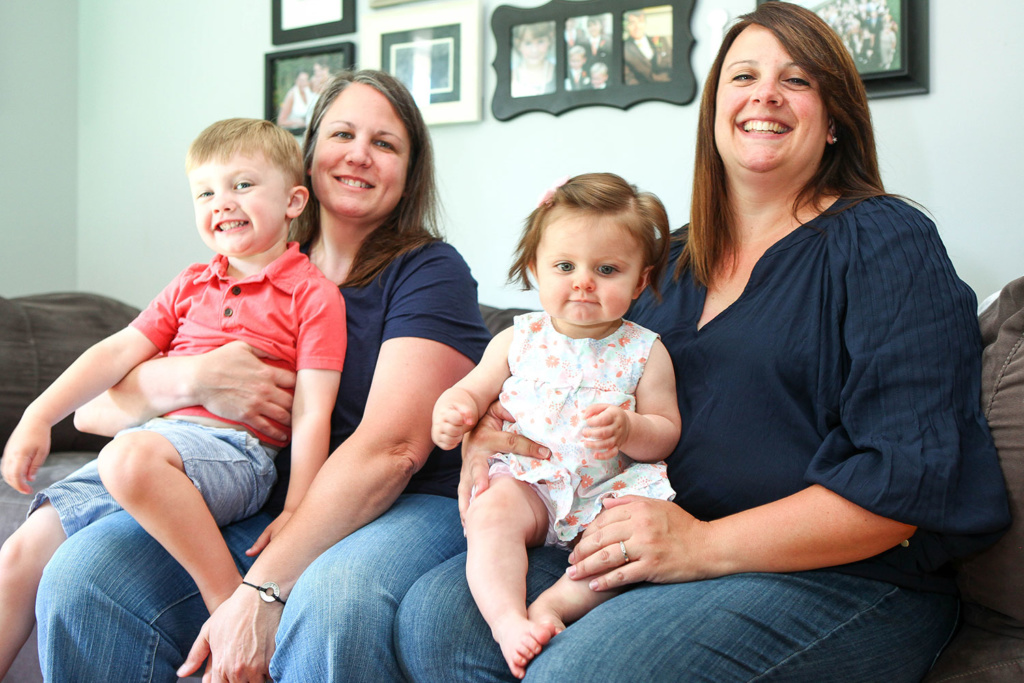 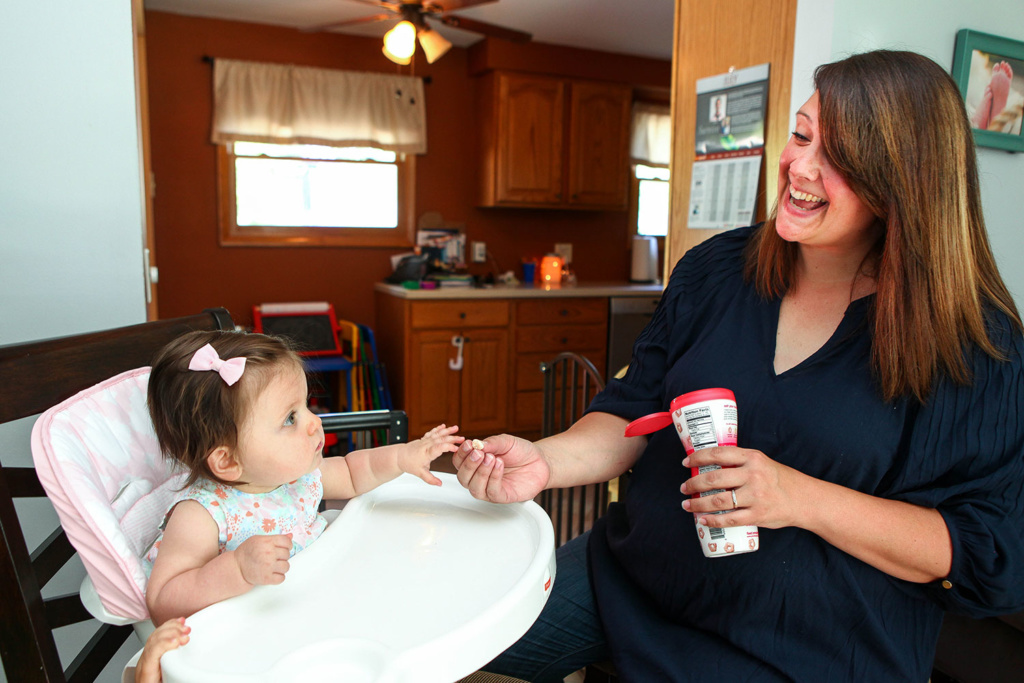 What were the options you had when you decided that you wanted children?

Stacy: I didn’t really know of any other options besides, you know, one of our friends had triplets and recommended our doctor. That was the only thing I thought of doing, was going there and getting medical intervention to have children.

Carrie: Everyone joked about how our doctor could “get a stone pregnant” and so we figured our odds were good and that we were in the hands of a professional.

Why did you ultimately choose IVF?

Carrie: With Lucas we did IUI, but at the time of having Callie the donor we had chosen for Lucas only had IVF-prepared sperm, and we wanted to be able to have a sibling for Lucas that carries his DNA. We decided to use Carrie’s egg and that I would carry the baby.

How is the process of IVF different from the IUI process?

Stacy: IUI is basically just intervention of having a doctor get the sperm into your uterus. There is less distance that the sperm has to travel, they monitor your ovulation and more sure the time is exact, down to the hour, of when they give you a trigger shot to release a follicle. There is a lot of medication to take for IUI, they’re still looking to stimulate your follicles so that you create more eggs and increase your chances. IVF is almost like IUI on steroids. A lot more medications and injectables.

How was it determined who would carry the children?

Stacy: Because Carrie gave no option. She just never wanted to. I think after Lucas was born, that just sealed the deal.

Carrie: Yeah, I saw what happened. I figured that Stacy was so good at it that she should just keep going with Callie.

Stacy: I mean, I loved being pregnant. It’s amazing what your body can do.

Carrie: And I delivered you milkshakes. It was great.

Stacy: It was a lot of nights with wine and cheese platters, shopping for eye color, hair color, education, medical history, background. We wanted the person to be German because Carrie is German and we wanted to get as close to Carrie’s looks as possible.

Can you talk to me about the time leading up to the embryo transfer?

Carrie: With all the shots and medications that I had taken, it was stressful. I was nervous. I was traveling around Christmas time with this medication, which is stored in the refrigerator, so everyone knew what was going on. That was nerve-wracking. It’s a real procedure, you know: You’re in a gown, they put you under and it was painful when I woke up.

What was the most difficult part of the IVF process?

Stacy: I think financially, and also all of the medications. It’s a huge cost, especially for us because we don’t have insurance that covers infertility. Neither of our insurance covered any of the medications or procedures, which was all out of pocket. That was the biggest burden. Then there was the rollercoaster of hormones, because you’re on so many medications. The “what-ifs” were hard to deal with as well.

Carrie: When we did our first IUI, we cheated and went out and bought a pregnancy test. You’re not supposed to, but we did it ahead of time because we were so excited.

How did you decide that you wanted another baby?

Stacy: It was a whirlwind thing.

Carrie: We debated for a little while.

Stacy: Especially coming from a family with same-sex parents, I didn’t want Lucas to be alone. I’m terrified of him getting bullied with any sort of discrimination because of us. I wanted him to have a sibling that he could relate to. Also, I thought ahead, like, when we’re not here for Christmases and holidays, who is he going to be with? Who is he going to have in his life? I also came from a big family. I could never imagine having an only child, especially on top of having same-sex parents.

Carrie: Also, Lucas was so cute, we thought why not try again!

Have you ever thought about your children wanting to find the sperm donor?

Stacy: We think about it all the time. We chose an anonymous donor, so technically, they cannot contact him. I just feel like now we have all the technology that there is, I think the kids would probably be able to find him or some other family.

Carrie: In our initial discussions, we talked about having a donor that our children could contact, but we fell for this donor’s profile. The one hiccup was that it was anonymous. We kept on coming back to it, though, so we decided to move forward.

After having Lucas via IUI, was having Callie via IVF the natural choice?

Stacy: Sperm is prepped differently for whatever procedure you’re doing and our sperm donor had no sperm left for IUI. So regardless of whose egg it was going to be, we had to go IVF. It almost made the decision easier for us to use Carrie’s egg. It was like a sign: This is all that’s left, and we don’t really have a choice but to use IVF.

What is it like now that you have two children? Any significant difference from just having one?

Stacy: There is a lot less sleep! It’s harder to make sure each child is getting enough attention, especially now that Lucas is at the age where he wants us to play with him a lot. It’s hard. Callie can be very needy at times and demands to be held.

Carrie: Leaving the house is a little bit more challenging.

How are Lucas and Callie different or alike?

Stacy: Callie is very demanding and lets you know when she is in need of something or done playing where she is. They sort of swapped roles. Lucas was a colicky baby, which was very hard, and at 3 months he turned into the most social, happy baby.

Callie is quite the opposite. She never made a peep as a newborn. Now she is very leery about people she’s not familiar with and is demanding of our attention.

Carrie: Lucas literally cried the first three months. I remember nights out on the deck rocking him to just see if a change in scenery would help. Callie: complete opposite. She did not cry a lot in the beginning. But when she does—wow!—you know she needs something and she wants it right away. But it is amazing to see them together and Lucas being so proud to be the big brother.

Are you planning on having more children?

Carrie: We’re done! Stacy’s sad about it; I’m OK with it, though.

Stacy: I am sad about it, but I know financially it would be hard and physically, like, we’re getting older. But I would love to have more, without the expense.

Carrie: Yeah, it was expensive, but we’ve been very fortunate. We have Lucas and Callie and I think we are good to go. They’re healthy and we’re lucky with what we have.

Off to the ER! How to cope with a child’s crisis and hospital visit
Making Milk: Breastfeeding is doable but sometimes challenging
To Top