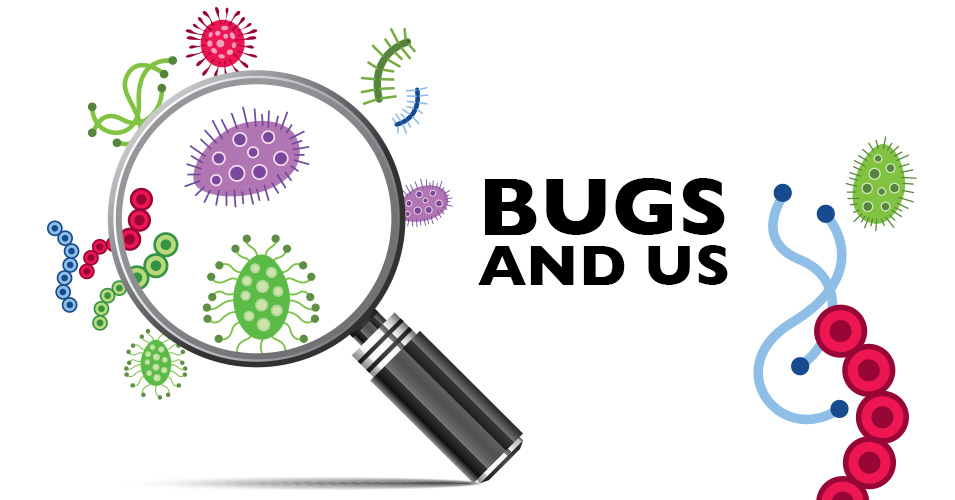 Kids are gross. No, not your kids. Other people’s kids. I’m sure your children are perfectly clean and illness-free. They never bring home a stomach bug, befriend a turtle or have a trail of mucous running across their faces.

Humans in general are downright offensive, especially at the microscopic level. We each harbor trillions of bacteria, some of us more than others. Don’t try to count them. It’s not really a competition, and the official estimates vary somewhat.

But rest assured that your body contains more bacterial cells than human cells. Yes, really. As disturbing as that sounds, we have a healthy, symbiotic relationship with most of that company. They aid us in digestion and other processes. We provide them a warm breeding ground, and we taste pretty good.

Occasionally, that hospitable combination can lead us to invite unwanted bacteria, not to mention a slew of viruses and parasites that are up to no good. From tetanus to ticks to tapeworms, there seems to be no shortage of freeloading creatures looking to call us home. In short, humans are disgusting.

But kids take this to another level. They often view basic hygiene as optional. They believe sleeves were intended as some kind of napkin/tissue catch-all. The littler ones even assume that every inanimate object not only can but should be inserted into their mouths. If you need proof of this, hand a 1-year-old a beach ball. It’s really no surprise how often they get sick.

Read: “Off to the ER! How to cope with a child’s crisis and hospital visit”

I was a biology major in college and I now work in the microbiology field. It’s literally my job to concern myself with the organisms that most people would rather not think about. This has always added an extra level to parenting, being aware of the wealth of serious microbes and other critters that are lurking out there, waiting to infect my daughter.

My interest may have started around age 8 when my sister and I contracted head lice. For those who don’t know, lice are wingless parasitic insects that belong to the order Phthiraptera, a name derived from the Latin for “Every parent’s worst nightmare.” The initial shock is followed by weeks of treatment with special shampoos, fine-toothed combs, plus a lingering skin-crawling paranoia.

I’m certain that I’m to blame for bringing these bugs home. I don’t recall being a particularly filthy child, but it’s a safe bet that my sister set the cleanliness bar a little higher than me. She bathed voluntarily, whereas I did so only under the threat of losing my TV privileges. My tub time largely coincided with when new episodes of CHiPs were going to air.

For a parent, a crisis like lice infestation can feel like utter failure. It compromises the core goals of keeping our children safe, happy, and still welcome in a neighbor’s home. In my own parents’ defense, the 1970s were a much hairier time in American history. Look back at those photos. The carefree attitude of the “Me” decade apparently included sporting nest-like ’dos perfect for cultivating a small louse farm. Blame disco.

Now we live in 2018, a theoretically cleaner era replete with key advances in technology and medicine that can keep our world sterile and free of disease. We have antimicrobial everything, touchless faucets and hand dryers in public bathrooms, and phone apps that map out high concentrations of flu activity. We even have Roombas to vacuum our floors when we are too lazy. What could possibly go wrong?

For my daughter, that question was answered by a foot infection that wreaked havoc with one week of her life. Sadie lives to dance and has the calluses to prove it, calluses that can be tested by the unforgiving dry winter air. One small crack was all it took. Minor pain led to inflammation, redness and a trip to urgent care. Worse yet, this happened on the eve of one of the bigger dance competitions of the year, a three-day marathon of tap, contemporary and other forms, all of which require two working feet.

Prescription in hand, we assumed the worst was over as Sadie winced her way through the first night of dancing. This, however, was no ordinary infection. This was MRSA. Officially, it’s known as Methicillin-resistant Staphylococcus aureus, but the more menacing maladies often hide behind the mystery of vague initials. The abbreviation sounded like a beast Godzilla should be fighting, making it no less intimidating.

Essentially, MRSA is a strain of staph that often gets the inaccurate designation “superbug.” The term is not meant to suggest that we celebrate it the way we do the Super Bowl or a supermoon. It merely indicates that the bacteria have become immune to conventional antibiotics. So back to the doctor we went! My professional experience told me the infection was still treatable, but my parental neurosis had me fearing amputation. Sadie didn’t exhibit quite the same level of concern.

“So, I’ll be ready to dance by Sunday, right?” she asked.

No, she would not. A few unsettling days followed, marked by the typical hope any parent has for a scary ordeal to turn into a character-building experience. In the end, everything worked out fine. Sadie learned that missing a weekend of dance is not the end of the world, and I learned that the copay on my health insurance does not increase with the threat posed by an infection.

Despite our best intentions, children will continue to test the limits of medicine, not to mention decency. Scientists will discover new vaccines and better disinfectants. Kids will play in the toilet and let dogs lick their faces. And we, as parents, will try not to view their sickness as a sign of personal failure. Remember, all kids can be a little gross—sometimes even yours.

Boy Scouts Evolves: Additional scouting programs to accept girls
Mother Knows Best: Yes, of course your mom really does get it
To Top