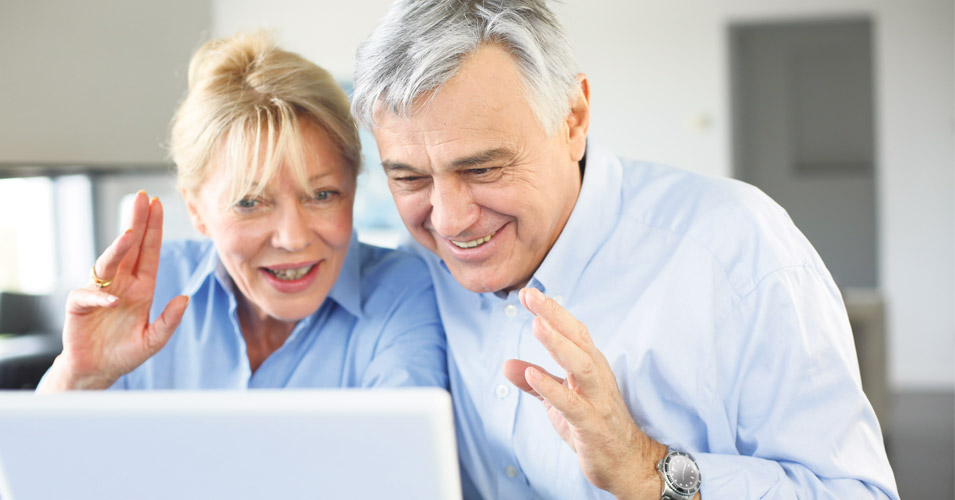 Clara Gonzalez has lived most of her 88 years more than 2,600 miles away from her hometown in Bogota, Colombia. She still misses the sister she left behind. But with technology, it’s a lot easier to stay in touch.

“The first time I used Skype was 10 or 12 years ago,” she said. “Now every week I call my niece in Colombia or my niece in Spain. It’s expensive to call on the phone, but Skype is free. And it’s very easy to use.”

Skype is free software that lets people talk to each other through an internet video connection. It’s available for computers and smartphones, and it works across different platforms. If you have an Apple iPhone, you can use Skype to talk to someone on a computer running Windows or even an Android tablet.

It’s not the only software you can use for video chats. A quick search of Google finds nearly a dozen different applications, or apps, you can use, with names like Tango, ooVoo, and QikShare. You can even use Google Hangouts and the newly introduced Facebook Live for video calls. But the two most popular ones, generally the easiest to use, are Skype and FaceTime.

FaceTime is a video-calling app exclusive to Apple products. With a press of a button, you can turn a regular phone call into a video call, and it works between Apple computers and iPhones. But if the person you want to chat with doesn’t have an Apple device, you cannot use it.

That’s where Skype comes in, and Gonzalez, who lives at The Nottingham in Jamesville, loves it. “When my niece Amparo was in Bogota last, she used Skype to show me all of (another niece’s) apartment,” she said.

Pat Negus of Liverpool isn’t sure what software her daughters used to stay in touch when one of them traveled to China. “My daughters set it up,” the 80-year-old said. “My one daughter drove up with an iPad, and my mother and I spoke to the other daughter on the tablet. My mother had tears in her eyes to see my daughter in China.”

Negus says she prefers using Facebook’s Instant Messenger app to stay in touch, although she thinks that may change. “I’m getting a new phone the next time I go to see my daughters,” she said. “I’m going to learn how to text.”

Negus and a handful of other senior citizens gathered at the Liverpool Public Library one evening for a free class on how to use their Android devices, taught by Keith Gatling, who is patron services librarian for technology.

“People in the Android class right now don’t know yet what their devices can do,” Gatling said. “Unlike Apple, the Android operating system is different for every phone and every tablet. So when there’s an Android upgrade, you won’t get it until the manufacturer tweaks it for your device.”

It’s confusing when people with Android devices can’t readily help you with yours because it’s a different brand. That’s why many people opt for Apple devices, said Gatling, who used to work at the Apple Store in Destiny USA.

That’s not the only reason seniors want electronic devices. Betsy Yurdin, 75, who lives in Bayberry with her husband, James, upgraded from a flip phone to an Android phone because of a bad experience she had driving.

“I was going to physical therapy at Loretto, and one day I took a wrong turn and got lost,” she said. “I got this because I heard it had GPS and I never want to be in that situation again.”

“Classes are the best way for anyone to learn,” Gatling said. “That or one-on-one tutoring. You can’t learn this from the internet or even videos. You need to have someone show you how to do things and answer your questions.”

There are other places where seniors can learn how to use their electronic devices. Another member of Gatling’s class, 75-year-old Claudia Burns of Clay, is also taking a class called Android Tablet Essentials from the senior educational center Syracuse Oasis, so she can use her Samsung tablet. “If I master this, then I’ll get an Android phone,” she said, smiling.

You’re never too old to learn, and there are many places where seniors can find out how to use their digital devices.

Founded in 1982, Oasis is a nonprofit educational organization active in 55 cities for individuals age 50 and older. The local group’s classes meet mainly at its East Syracuse headquarters. Go to oasisnet.org/Syracuse-NY.

People age 60 and older can audit certain classes at Onondaga Community College for free. The college also offers a series of Cyber Senior classes that teach beginner-level classes on how to use computers, Facebook, and iPads. Learn more at http://bit.ly/1Th6Xru

Onondaga-Madison BOCES offers a couple of one-night iPhone and iPad classes at both Liverpool and Cortland campuses, but the other classes teach specific computer software. You can learn more at ocmboces-catalog.org/.

Mohawk Valley Institute for Learning in Retirement meets on the SUNY Polytechnic Institute campus in Utica and offers introductory computer and iPhone classes for members. Get more information at sunyit.edu/mvilr.

Digging Dirt: Kids who garden reap all kinds of bounty beyond fruits and veggies
My relationship with reading has evolved over the years
To Top