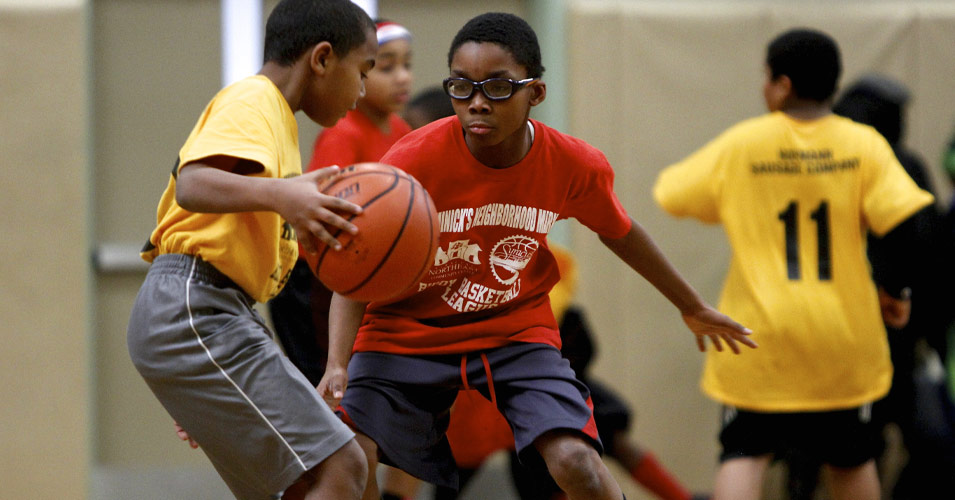 Two 10-year-old soccer players were scrapping for a loose ball along the boards at the Central New York Family Sports Center in Baldwinsville on a freezing December Saturday afternoon. When the boy in the green jersey fell to the ground, the referee awarded a free kick to his team.

“What the freak?” protested the boy on whom the foul was called. The coaches, astounded by their player’s reaction, immediately intervened. Angry No. 4 shut his mouth and the referee resisted his urge to send the player off.

A few seconds later that same player scored a goal, celebrated with his teammates on the pitch and jubilantly ran to the bench. Instead of congratulating the player on tying the score, his coaches reminded him about his conduct seconds earlier. No. 4 stopped smiling and appeared to show genuine for his disrespectful actions.

Call it a learning moment in pre-adolescent sportsmanship. But in other instances, teaching kids and their parents about respect and dignity for their opponents and the referee can be more complicated.

Consider these moments of infamy:

• A pair of 11-year-old hockey players started throwing punches during a game at a Syracuse rink earlier this season.

• During an indoor soccer game in Baldwinsville last year, a 10-year-old goalkeeper smiled at the opposing coach after making a save on a free kick. The coach said, “What are you (expletive) looking at?” The boy burst into tears.

• During the outdoor season for a girls’ recreational soccer program in Canastota, two years ago, a conflict between two under-12 players spread from school, to the playground, to the practice field at which both girls played on the same team. The harassment eventually sucked in the two girls’ mothers, who got into a shouting match at one game, and league organizers had to step in and talk the team’s coach out of quitting the organization.

Let the players play, coaches coach, referees referee and parents cheer. Sounds simple enough. And yet, youth athletic organizations are being forced to write rules to make sure players, parents and coaches behave.

Nowhere is this more apparent than in ice hockey. Locally, many youth hockey organizations supplement USA Hockey’s recommendations and standards for controlling bad behavior by players, coaches and parents, says Terry Walton, vice president and discipline committee chairman of the Syracuse-based Valley Youth Hockey Association. If a player gets a game misconduct (thrown out of the remainder of the game by the referee) for fighting, mouthing off to a referee, or a malicious slash or check, members of the committee take him or her behind closed doors and try to counsel the player about sportsmanship, fair play and safety. The same committee also deals with coaches who verbally abuse referees.

As for dealing with unruly spectators, Valley and other local youth hockey organizations keep red coats at the rink. When a spectator sees someone approaching the stands in that red coat, he should quiet down or expect to be asked to leave, Walton says. There have been games, he added, where a referee had to stop play until police arrived to escort enraged parents out of the rink.

Valley also has a “24-hour rule,” where parents are asked to wait a day before contacting a coach about their child’s playing time or other concerns related to a game or practice. Walton, who played baseball growing up and didn’t get involved with hockey until his son started playing, says Valley’s Little League baseball and lacrosse programs are much easier “to keep civil.”

“Hockey has a much longer season and it’s a totally different culture,” Walton says. “Compared to when I was growing up, sports are more competitive, there’s more emphasis on the kids being good at sports as opposed to just playing for fun, and there’s more interest in scholarships, which is driven by the parents. We have to pound it (sportsmanship) into everyone, and we’re not always successful.”

Walton’s efforts appear to be working: At the halfway point of the 2013-2014 season there were five game misconducts by players, down from 15 at this time three years ago.

“We keep it simple,” she says. “They should just concentrate on playing the game, and let everything else around them happen. Just focus on improving yourself.”

Coaches tell the parents and players what is required for a participant to move up to the next skill level. The goal is to move lower-skilled players to the middle level, and the middle kids to the highest level. Dirty play and mouthing off to referees, other players and coaches won’t get you there, Edson says.

Jamie Frank, basketball coach, referee and former board member and age group director, says JDYAA avoids problems by responding to inappropriate behavior with swift, harsh actions. If a parent causes problems at a game, chances are he will never be considered for a coaching or referee post. “We don’t mess around,” Frank says.

The last major incident Frank could recall took place about 10 years ago, when the coach for a team of fifth- and sixth-graders continually screamed at a referee. The coach was ejected and removed from the league.

In addition, the league belongs to a co-op with other youth basketball organizations, for which parents can’t referee games in their own school district. For each grade level, there’s a director who attends most games. As for dealing with disrespectful or dirty players, coaches are encouraged to pull the kids out and talk to them about their actions. Even complaining about not getting a pass from a teammate is unacceptable, Frank says.

“Your demeanor on the court is very important,” says Frank, whose daughter, Maddie, plays on the J-D girls’ varsity team. “You never know who may be watching you. Everyone knows teachers talk to each other and coaches talk to each other.”

In Syracuse, the city’s Parks and Recreation Department offers winter co-ed basketball through age 12. Recreation Supervisor, Jesse Brantley, says league personnel manage to keep the more competitive hoopsters happy while preserving the league’s core mission of instruction and fun. They’ve accomplished this by balancing the teams and rotating players within the four quarters of each game so kids get the full experience.

All parents and players sign a code of conduct. The player’s obligation includes a player/teammate contract that stipulates: “Play fair, respect and help others. Be positive.”

Brantley and Parks and Recreation director Chris Abbott cannot recall there ever being a problem at practices or games. Brantley’s 10-year-old son, Jaylen, currently plays in the league. Brantley says he doesn’t coach his son’s team and has not refereed his games; he’s enjoyed the boy’s basketball progress purely as a spectator and loves what he’s seen so far.

“He always has a smile on his face,” Brantley says. “Sure, he wants to win. But he’s not crying after he loses—he’s still smiling.”

At the Central New York Family Sports Center in Baldwinsville, manager Jeff Knittel took several actions within the past year to cut down on problems with players, coaches and parents. A “zero tolerance” policy there gives employees discretion to eject unruly participants or spectators. Knittel patrols the stands near both fields during games and immediately confronts parents who yell at the referee, players or coaches. If a parent is ejected, Knittel lets the appropriate coach know. If there is a player known for causing problems, a center employee will be assigned to keep an eye on him or her.

Last year, two coaches in the 16- to 17-year-old soccer league engaged in a fistfight and are no longer welcome at the center. That was around the same time the coach of a 10-year-old boy’s team muttered the expletive to the opposing player. Knittel got between the coach and the boy’s father, and asked the club to suspend the coach for a few games. On another occasion, Knittel had to intervene when a group of under-16 girls and a mother harassed an opposing player because they thought she was faking an injury sustained during a game.

Still, more than 90 percent of the soccer games played at the center these days finish without incident, Knittel says, noting that the zero tolerance approach is working.

“When I was playing, we played just as intense as the kids do now, but maybe we just had more respect for other people,” says Knittel, who started for Syracuse University’s men’s soccer team in the mid-1990s and has coached youth, high school and college teams. “The biggest change has been on the parents’ end. It’s so competitive now. Kids are specializing in one sport when they are 8 or 9, and the parents put a lot of pressure on them.”

American Youth Soccer Organization, or AYSO, which has chapters in several areas of New York state, has worked hard to counter the stigma often attached to competitive sports. It promotes recreation-level soccer but prepares and encourages kids to advance to higher levels. Volunteers post signs at the fields reminding everyone to stay positive and have fun. Spectators can ceremoniously issue “cards” to their counterparts on the sidelines as a lighthearted reminder to leave the negative attitude at home. For the under-8 age groups, they don’t even keep score.

“AYSO focuses more on the good of the game, not so much on the game that’s being played that day,” says Vicky Anton, commissioner of the Canastota district. She grew up in soccer-crazy England but is still astounded by some of the sideline behavior she’s witnessed over the years.

“We were allowed to lose,” she says. “Kids today aren’t expected to learn how to lose.”

Bruce Carter, a child psychology professor at Syracuse University, says sportsmanship can be a difficult concept for children to grasp between the ages of 8 and 12. Their ability to take the perspective of others begins to emerge, but it takes years to develop fully.

“The emotional component—the elation of winning—diminishes the ability to think about the perspective of another person,” he says.

But there is also a social component, Carter says. At sporting events, parents set examples that are deeply imprinted on their children. If they behave poorly, their kids may follow suit years later. It’s also crucial for parents to be engaged and involved with their child’s activities.

“It’s the difference of saying ‘they won’ instead of ‘we won,’ Carter says. “Separate yourself from it. Parents need to see that it’s not the parents’ win or loss. Talk about feelings, reactions. Don’t just direct them how to behave—or worse, ignore it. Help your kids navigate these experiences in proper context.”

Life in the Fast Lane: Do I want to spend my life driving my kids to activities?
Games Parents Play: Moms and dads enjoy a little friendly competition
To Top