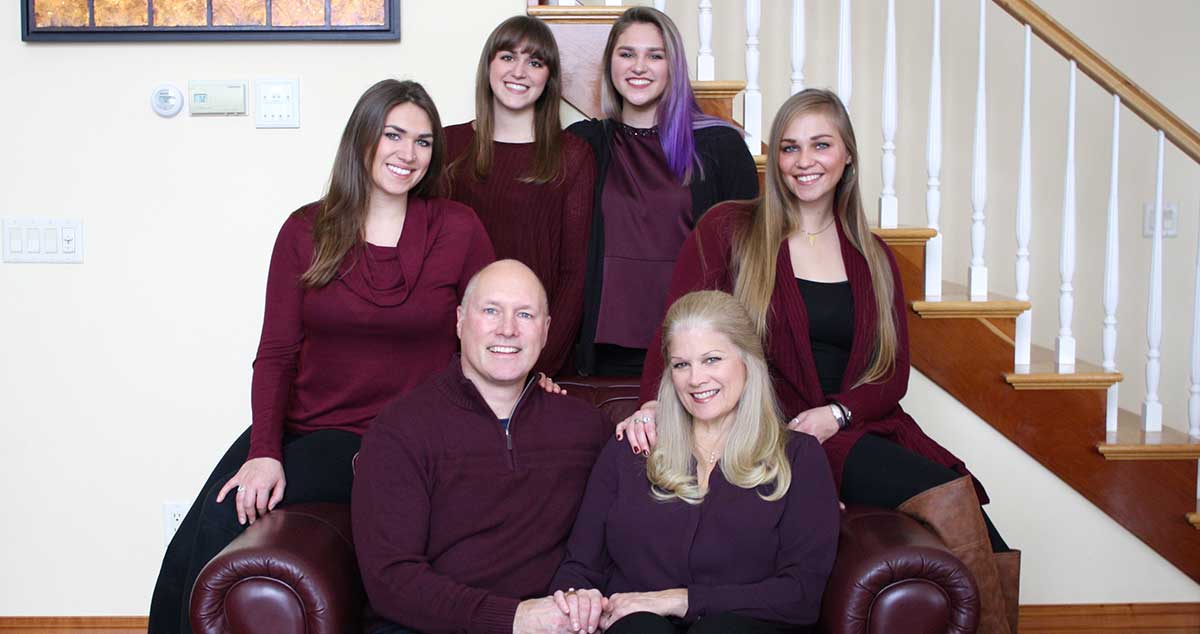 “I didn’t plan on having four girls — I daydreamed it would be all boys.” But his daughters taught him more about perspective than he ever expected.

Editor’s Note: Bill Brod and his wife, Lisette, of Cazenovia, have four daughters: Annalise, 25; Kelsey, 23; Gillian, 20; and Hannah, 18. Bill is the publisher of Family Times Magazine and the Syracuse New Times newspaper in Syracuse.

W hen Lisette and I first got married, we thought we wanted a bunch of kids. I didn’t know what a bunch was; I guess then it was more than one and less than 10.

I didn’t plan on having four girls. I daydreamed it would be all boys; I guess that’s the vision every dad has of having sons. And I had all girls. You can’t change it, so I just kind of rolled with it. My wife’s a terrific mom. Watching my wife parent, it seemed that it came so naturally and easily to her that I kind of just went along for the ride.

It’s different having four girls when they’re young than when they’re older. When they are really young, there’s a different kind of a bond between a dad and daughter, such as when they are old enough to start picking out clothes. I can remember when I’d take girls shopping, they’d try clothes on and want me to give them a thumb’s up or whatever. As they got older, they weren’t as interested in having that kind of approval.

One of my daughters, when she was young, liked to shave along with me. We have some great pictures of the kids standing in their diapers on top of the vanity with shaving cream on their face and shaving with the handle of their toothbrushes. It was a way to share the morning activity. When we were first married, we had only one full bathroom, so it was either wait for me to come out, or come on in and be part of it. It made for some great stories, and we still laugh about those things today.

I never pressed on any of the girls to be tomboys or do boy-type things. They like the outdoors, they all can shoot pretty well, they like to fish. So there were things we could do that weren’t necessarily tomboyish but allowed them to be girls and still enjoy the activities I enjoyed. Now that they’re older, it’s particularly satisfying to interact with my daughters as adults.

Today, all four girls are living in different situations in Denver. When they were at home, we had a family tradition of Sunday dinner, and they have carried on that practice. On Sundays, they get together at one of their apartments, and that’s usually when they Skype with their mom and me.

Their mother and I are very happy that they grew up with common interests. When they didn’t have common interests, they still had an interest in being together. Even though they are all halfway across the country from us, they are still close to each other in every sense.

Having a family where you’re the only male in the house? Anytime you have women in the house with men, it’s tough. They don’t always see the same situations in the same light. I advise other fathers to learn to take a bath in estrogen and like it. It’s also necessary to learn to have a sense of humor about “girl” things. So, be ready for it. Sit still, Dad, and let them paint your nails; it will come off.

Daughters will teach you to see things in completely different ways than you think you’re ready for; their perspectives will stretch your perspective on almost every issue that’s important.

There were plenty of times when we disagreed. They spent a lot of time trying to bend my thoughts to their will—and there were many times when they were successful. When they felt passionately about some situation, they were not shy about discussing their feelings. All of them are very confident about the assertion of their beliefs. They were respectful of their parents even when they disagreed with us. They’re really good girls.

When each girl turned 14, I had a piece of jewelry specially made, with a Scripture verse on it: It’s a gold heart that’s been cut in half; there are no two alike. Each of the girls has her half of the heart and I wear all four. We designed it together, settled on the same Scripture verse, and the different girls have chosen different stones to be embedded into their piece of jewelry to make it unique.

It represents my covenant to them to be their dad and protector and guide, until they choose who they want to spend the rest of their life with. Someday, someone will step into my shoes as their partner, protector and completer. And I’ll give my half to that person. I haven’t given away any of the hearts yet, and it will be a bittersweet moment when I do.

The most rewarding aspect for me of being a father to four daughters, I think, is seeing them grow and stretch their wings. One of the great things a dad does is push his kids, so life doesn’t get comfortable. I don’t think any of our girls has had life come easily to her, and that’s good. They exercise their creative thinking and their gifts and their abilities. Part of the job of a dad is to help them discover all those things and learn how to use them—and be there if they stumble.

All four are different personalities. It’s hard to believe they came from the same parents with their totally unique likes, dislikes, the way they approach life, their sense of spirit and freedom, and the interests they pursue.

I think watching them become their own people, come out from the shadow of their parents and make their own way in life has probably been the most enjoyable thing for me. And they’ve always made me feel special to be a dad: Every Valentine’s Day they make me homemade cards. I have almost all of them still.

— By Bill Brod, as told to Diane Stirling

Moving On: A parent’s reflections on high school graduation
College Dorm Dilemmas: 5 tips for equipping that first room
To Top