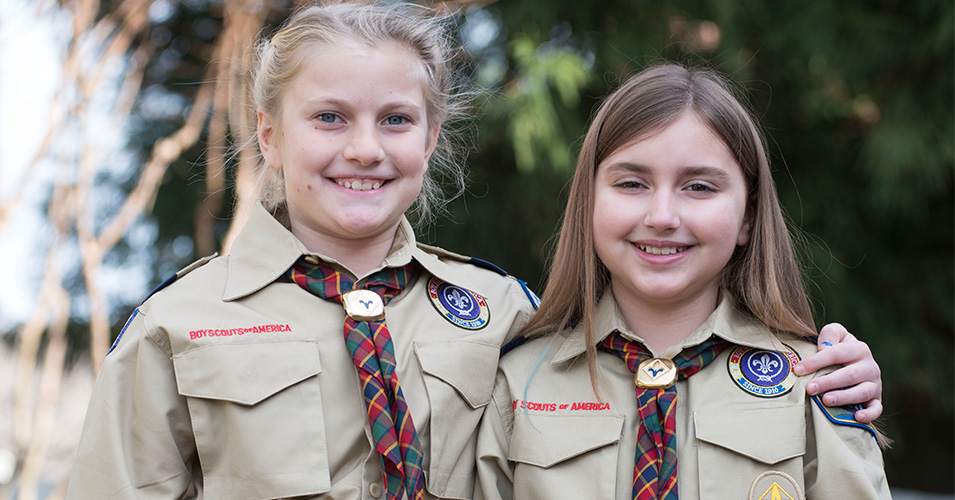 The words “ boy scout” tend to summon an image of a kid in a tan button-up shirt, green shorts and a sash full of merit badges. The child would be just as ready to help an old woman cross the street as he would be to start building a fire in the woods.

But there’s a new Boy Scout on the horizon, and she’s a girl. Following a fall 2017 announcement, girls are to be allowed to participate in Cub Scouts and Boy Scouts, the Boy Scouts of America’s two most prominent programs.

“We didn’t just wake up one day and say, ‘Oh yeah, girls.’ This has been talked about for years,” said Haley Sylvan, executive of the Tri-Rivers District of the Longhouse Council of the BSA.

The BSA, a nationwide organization, was founded in 1910 and has more than 2.4 million participants, making it one of the country’s largest youth organizations. Its goal is to train young people in self-reliance, character development and responsible citizenship. This is accomplished through several outdoor and educational programs, including the well-known merit-badge system.

Read: “Kids in the Wild: Nature skills teach young people about the Earth — and themselves”

Sylvan grew up an outdoorsy child and recalled her parents constantly encouraging her to go outside and play. She was a member of the Girls Scouts, joining when she was 14. As a child, she spent a lot of time at a Christmas tree farm owned by her great-grandparents. The farm and her great-grandfather eventually inspired her to study forestry in college. When she was looking for a direction for her career, a peer suggested she apply for a job with the BSA.

“I thought he was nuts,” she recalled. “I had no idea women could work for the Boy Scouts.”

While the news that girls would be allowed in scouting made headlines, Sylvan said it wasn’t that much of a leap for the group. The BSA has several other programs under its umbrella that have been co-ed since the 1970s. The membership expansion was a way to continue that trend.

There are three traditional divisions to the BSA: Cub Scouts for ages 7 to 11, Boy Scouts for ages 11 to 18, and Venturing for 14 to 21. Venturing is a co-ed program, as are the BSA’s specialty scouting programs, Sea Scouting and Explorers. Cub Scouts and Boy Scouts were the final programs to remain single sex—sort of. While girls were not officially permitted to participate, they could often be seen at events and meetings regardless.

“It’s rare that you go to a pack event and don’t see little sisters—or older sisters—nearby,” Sylvan said. Sometimes girls would even make up their own unofficial events on the sidelines, learning by watching. Scouting families began to voice their dissatisfaction with the exclusion of girls from some programs, noting that the separation made scheduling their kids’ activities unnecessarily stressful.

“It can be hard to go from a sport event, to ballet, to karate, with scouts somewhere in the middle,” Sylvan said. “And some families can have multiple children in scouts on different days of the week.”

If the girls had to stay home with a sitter or another parent while the boys went to scouts, that made it just a bit harder to attract newcomers to the BSA. In addition, permitting girls created a more family-friendly atmosphere, which is essential to the BSA’s mission.

After the BSA’s fall announcement, there was some notable pushback from the Girl Scouts of the USA.

“Girl Scouts offers a one-of-a-kind experience for girls with a program tailored specifically to their unique developmental needs,” the Girl Scouts of the USA stated on its website shortly after the announcement. “The need for female leadership has never been clearer or more urgent than it is today—and only Girl Scouts has the expertise to give girls and young women the tools they need for success.”

Although the names sound similar, the BSA and the GSUSA are separate entities. However, Sylvan said there is sometimes cooperation, depending on the level of rapport between the BSA director and his or her counterpart with the local Girl Scouts. In the North Country, Sylvan said it’s not uncommon for her to reach out to the Girl Scouts and vice versa to co-host events.

“We’re not trying to bring girls out of Girl Scouts, we’re trying to get the girls who aren’t already there,” she said. “It’s just another opportunity.” There’s also nothing stopping a child from joining both the Girl Scouts and the Boy Scouts; Sylvan said one girl who recently joined Cub Scouts in Herman is also a Girl Scouts member.

A program for older girls, who would be allowed to become Eagle Scouts, has also been announced but will not be put in place until some time in 2019.

Nature skills teach young people about the Earth — and themselves
Bugs And Us: The battle waged between good and evil bacteria
To Top