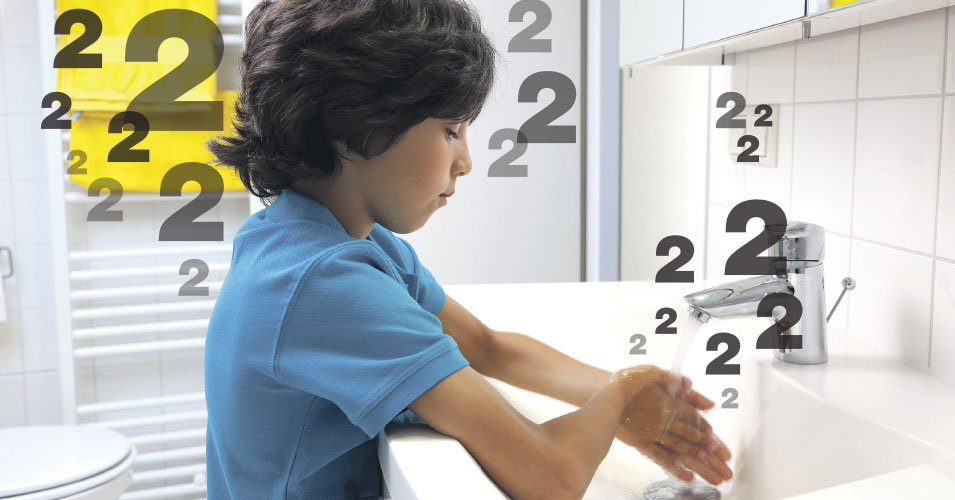 Have you ever encountered a child with obsessive compulsive disorder? Bobby (a fictional character) is typical. His day is governed by rituals. His alarm goes off at 5 a.m. He shuts off the alarm twice; even numbers are good. He puts his left foot on the floor, then his right foot. Left is always first; “left” has four letters, and if he wants to have a good day he needs to keep even numbers.

His bus doesn’t come until 7:45, but he has a lot to do. He gets dressed, left arm then right—more even numbers. Now left leg, then right leg. Left shoe, then right shoe. He goes downstairs for breakfast but has to take an extra step because there are 13 steps.

He goes into the bathroom to wash his hands before eating breakfast. He pumps the soap dispenser two times and turns on the left faucet first. He does this two times. His sister yells, “Mom, Bobby is doing his hand-washing thing again.” Bobby tells his mother twice that he is almost done. He sits down at the kitchen table and taps his feet twice. He cuts his muffin into six even pieces and has to chew each one six times: He wants to have a good day.

His mother reminds him he needs to hurry if he is to make the bus in 15 minutes. By the time he gets his coat on (left sleeve first, then right) and picks up his backpack (twice), he misses the bus. Now his mother is angry and frustrated that she has to drive him to school, again. On the way to school Bobby asks, “Will you pick me up at 3:15?” His mom answers, “Of course, yes.” Bobby then asks the same question 11 more times. By the time they get to school his mother is fuming and silent, but Bobby can’t help himself. He says goodbye once aloud and once under his breath, shuts the car door—twice—and starts counting the steps until he reaches the school door.

Children often feel ashamed, embarrassed, crazy and out of control with their compulsions. They know it’s ridiculous but feel they can’t help themselves. When a child receives a diagnosis of OCD and discovers the OCD is crazy and not himself, there is a sense of relief. Parents are also relieved to get an explanation for their child’s frustrating behaviors and discover that there is help to free their child from OCD.

Roughly 1 million children are affected by OCD. One in 200 children has OCD. Twenty percent of children who have OCD have a family member with OCD. OCD is a neuropsychological condition and classified as an anxiety disorder. It is sometimes described as a “neurological hiccup.” The symptoms are on a continuum from mild to severe. OCD symptoms often change and wax and wane over time.

Obsessions are thoughts; compulsions are actions. Obsessions are intrusive, involuntary thoughts or pictures that occur spontaneously. When a child has an obsessive thought, he feels anxious, frightened and emotionally uneasy. He tries to get rid of the thoughts, can’t, and feels out of control. A child experiencing an obsessive thought begins to react emotionally and physically as if what she is imagining is actually happening. Children don’t want to engage in compulsions, but it’s the only way they have figured out to get away from the dreadful feeling of the obsession.

Compulsions are rituals the child uses to try to reduce anxiety created by the obsessions. Children feel as if they have no choice. They feel the compulsion is a matter of survival. With OCD thinking, the focus of your world becomes very small and specific, concerned only with getting rid of the obsession and the anxiety it creates, putting the need to be safe and certain above all else. Some compulsions are invisible or mental rituals. A child thinks about death and has to say a prayer seven times or someone she loves may die.

Sometimes there is a logical connection between obsession and compulsion, like washing hands when you feel contaminated. However, wearing a special shirt to keep someone from dying has no logical connection. Logical or not, compulsions will reduce anxiety but only for a brief period of time. This short-lived reduction in discomfort the anxiety creates is what locks in the cycle of OCD. Each time a child engages in a compulsion, it reinforces the idea that the compulsion is the only way out. Young children may not have specific thoughts but are compelled to perform an action until it “feels right.”

Treatment for children with OCD should include parents and the child, working together to overcome OCD. Externalizing is a technique in treatment of OCD where a child first learns to identify OCD thinking and then works to fight against it. Cognitive behavioral therapy—CBT—and exposure response prevention—ERP—provide children with a toolbox of skills to be used any time a symptom is present.

Children learn how to face their fears and change their thoughts without needing to use the compulsions to reduce their anxieties. In some cases, a trial of SSRI (selective serotonin reuptake inhibitor, used for anxiety and depression) medication is helpful.

Children’s book about OCD and its treatment: Up and Down the Worry Hill: A Children’s Book About Obsessive-Compulsive Disorder and its Treatment, Aureen Pinto Wagner, Ph.D

Children’s book introducing CBT (cognitive behavioral therapy): What to Do When You Worry Too Much: A Kid’s Guide to Overcoming Anxiety, Dawn Huebner

A Hormonal Convergence: When adolescence and menopause collide
Timing Is Everything: Efforts to help my teen make her days predictable and purposeful
To Top