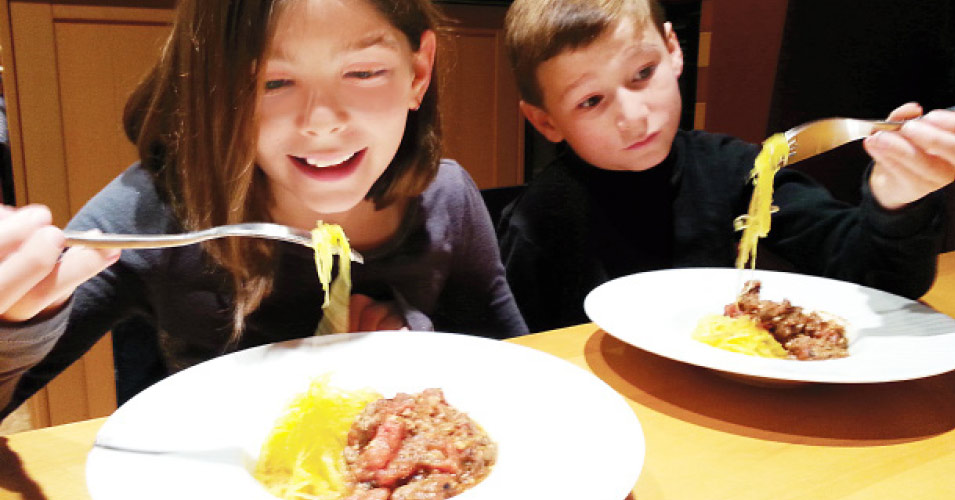 I’m not saying you put on a few pounds during the holidays. But the average American puts on one to two pounds in the period from Thanksgiving through Dec. 31. That number can rise to five pounds for folks who are already overweight. And kids, they’re not immune. It’s common for kids to gain a pound during the holidays, too.

Why? Well, we tend to give ourselves license to eat what we want because we’re “celebrating.” But a pound or two a year really adds up (she says from experience). So I’m here to help us get back on track this year!

That doesn’t sound like much fun, does it? But here’s the kicker: When we do it right, eating healthy doesn’t have to be punishment. In fact, at my house we eat right every day and truly enjoy it. And believe me, I don’t eat food that doesn’t taste good. If I’m going to eat it, and share the recipe, it’s going to taste great. Not good, but great!

Here’s a true story. I went to a friend’s house, planning to prepare spaghetti squash for dinner. The kids at this house don’t usually eat “healthy” foods; in fact, chicken nuggets are a staple in the 2-year-old’s diet. And here I am, about to feed them squash with sauce.

Expecting a battle, I placed the food on the table and waited. The 2-year-old took his seat, picked up his fork, and twirled away, thinking he was eating “sketti.” Seriously! If you don’t say anything to the kids, they won’t even know they’re eating squash. (Neither will the BIG kids in your life who think they don’t like vegetables.)

If you’re not familiar with this low-carbohydrate vegetable, let me give you some history. The unusual winter squash (Wikipedia gives other names as Cucurbita pepo var. fastigata and squaghetti) comes in a variety of colors, from an off-white to orange. It’s oblong and has a somewhat hard shell. The key to this magical fruit is what happens when it’s heated. It starts solid, and as it bakes (or steams), the flesh turns into strands that resemble spaghetti.

It is super easy to make. If I have the oven on anyway, I toss it in for an hour at 350 degrees. If not, I stick it in the microwave for 22 to 25 minutes. I don’t even cut it in half and pull out the seeds first. I hate to cut raw squash in half. It’s dangerous. The skins are often virtually impossible to cut. No matter what squash I’m working with, I cook it whole first, let it cool so I can handle it, and remove the seeds afterward. Danger averted.

Now that we’ve got the “sketti” covered, let’s focus on the sauce. I know the traditional Italians in our audience call it gravy, but at my house it’s sauce. I don’t care what you call it; I just want to make sure you don’t pour it prepared from a jar. Commercial spaghetti sauce is filled with sugar and sodium. Instead, let’s make our own from pantry staples. It’s quick, easy, and you know exactly what’s inside. No sugar!

For fast dinners most weeknights I keep my pantry stocked with canned crushed tomatoes. Whipping up sauce with canned tomatoes is almost as quick as opening a jar of the pre-made stuff. I start with lean ground beef and sauté it with onion powder, celery seed and a carrot that I’ve quickly run back and forth on my mandoline so it’s chipped into tiny thin slices. Add Italian seasoning and some freshly grated Parmesan cheese and you can’t go wrong.

This dish is tasty and healthy. It is low-fat, low-carb and full of fiber and protein. Talk about starting off the new year right! Serve this and know you’re back on track.

2 tablespoons onion powder (if your kids eat onions, use the real thing!)

Brown the ground beef (and whole onions if you choose) and drain. Add the carrot and garlic, and stir until fragrant. Pour in the crushed tomatoes and finish with the seasonings. Serve over your “sketti” and top with freshly grated Parmesan cheese.

Taking Things Lying Down: Lessons from six months in bed
Getting That Feeling: Developing empathy is an extended process
To Top