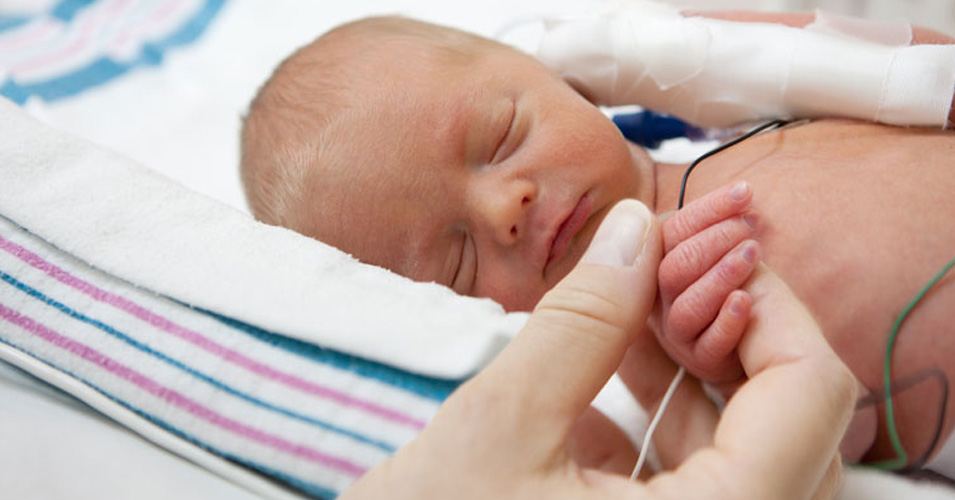 After enduring a high-risk pregnancy and the unexpected delivery of our triplets, we were faced with the next phase: the neonatal intensive care unit.

After enduring a high-risk pregnancy and the unexpected delivery of our triplets at 28 weeks, I  and my husband, Rob, were faced with the next phase: the neonatal intensive care unit.

We had no choice.

When Baby A had had enough of Babies B’s and C’s antics, she took matters into her own hands, so to speak, and made a break for it.

So we all made our way to the NICU on the ninth floor of Crouse Hospital, some of us more quickly than others.

That first sleep-deprived-yet-adrenaline-fueled encounter wasn’t much to speak of, mainly because I was overwhelmed and not quite sure of what to think of things after the 2:06, 2:07 and 2:08 a.m. delivery. I focused on what I could: naming our girls.

As trying as those three months were, there were also moments of joy.

Since Baby B was our boy, he was easy. We toyed with naming him after my oldest brother but decided, instead, to name him after my father, who had passed away eight years earlier. Baby B would be Theodore Nicholas.

But I had to see Babies A and C before naming them. And I was wheeled first to Baby C, who seemed to be the strongest of the three at the time. I recalled the nurses saying she was “stubborn” and immediately I shouted out, “That’s my Ukrainian. That’s my Olena.” Olena is Ukrainian for the name Helen, which is Rob’s mother’s name. Her middle name, Cecilia, is after my mother’s sister, Celia.

Then we visited Theo, who was the biggest of the three, but still a micropremie at 2 pounds 7 ounces.

That left Baby A—our 1 pound 4 ounce little firecracker—with Gretchen Estelle, a first name for Rob’s German heritage and a middle name that came from both sides of the family.

Neither my husband nor I had a chance to hold our babies after birth. And I was too focused on asking about my health, which, years later, I understand completely as a need to protect myself.

That first encounter made it difficult to see any hope. It was hard to feel optimistic when my preemies were covered in oxygen tubes, protected by an incubator, bathed in billirubin lights and, in Theo’s case, attached to an oscillator.

Those early days in the NICU were like one step forward, three or four steps back, while I was sleep-deprived and nursing.

It was grueling. It lasted for three months. It was definitely not a sprint.

As trying as those three months were, there were also moments of joy.

I remember the first time I was able to kiss Olena on her cheek when her nurse told me she was stable enough. That was one day after she was born. She was still too fragile to be held.

A week later I got to hold Gretchen when they were changing the bedding in her isolette. She looked like she was all eyes—super deep, dark brown eyes—peeking through the oxygen tubing that surrounded her tiny frame. This girl fit in the palm of my hand.

Theo was a troublemaker—and 10 years later, he still is. He was the most unprepared for birth, so it took longer for that first contact. I think I cried the most when I first held him. (He still has that effect on me.)

And while each of those moments was brief, more prolonged contact known as kangaroo care was really the highlight of our NICU days.

Kangaroo care means skin-on-skin contact between a parent and a baby. The baby wears its diaper, and any leads or wires that may be attached, and is positioned in an upright position on the parent’s chest. The baby is then draped in a receiving blanket or in your clothing. The contact helped the baby calm, promoted production of breast milk, and really healed us in the process.

Kangaroo care was only possible once the babies could handle the contact. Sometimes it would be one-on-one contact, while other times Rob or I would have two at a time.

Contact such as that is unforgettable. Here you have this very fragile, imperfectly perfect being that you struggled to bring into this world on your chest, growing and thriving. And among the world of monitors with alarm bells that signal every brady and tachycardia, for the moment it’s just you and her, or you and both of the girls, or you and him.

That is, until it gets to be too much, or it’s too late, or visiting hours are over.

And the ability to block out the hustle and bustle weakens and reality sets in because, yet again, here you are handing your baby over to spend another night in the NICU while you grab your gear and make the trek home. Alone.

Our triplets remained in the NICU for an average of three months. Olena, although jaundiced, was the first to come home. A week and a half later, big brother Theodore came home with strings attached: an oxygen tank and a sleep apnea monitor. Then, 10 days and one hernia surgery later, the baby who started it all, Gretchen, Baby A, came home, appropriately on a rainy Independence Day.

While the pace of the NICU was intense, the babies did have care around the clock by an incredible team. Coming home, they would be entrusted to the care of a first-time mom and dad. The NICU dance was giving way to the first few weeks at home. And we were all in for a surprise.

Co-Parenting: Child-rearing means communicating, even if you’d rather not
Fur Babies: Can you compare pet ownership to parenting?
To Top