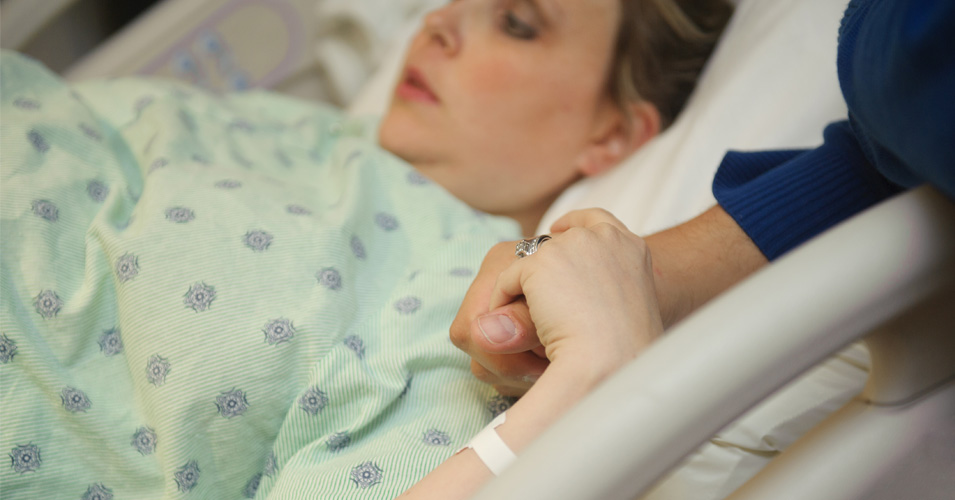 A mother recounts her high-risk pregnancy, where she went into labor with triplets after only 24 weeks. Follow along with her story.

My high-risk triplet pregnancy, plagued by all-day morning sickness, hung in the balance at 24 weeks—and that’s when babies A, B and C decided it was a good day for a birthday.

So I was put on bed rest to delay delivery.

Hours before my 25th week I was at a regularly scheduled—and seemingly routine—visit with my obstetrician in Syracuse. Following the visit, I made the 30-minute drive back home, but by the time I got there I was phoned by the doctor’s office and told I needed to pack a bag and get to the hospital.

I was three centimeters dilated.

In a panic I called my husband, Rob. I’m not even sure if I was crying or laughing.

It was a gorgeous day in March, just about mid-month. I remember sitting in the Honda CRV with the sun streaming through the window, warming my face and my giant belly. For a moment, I felt a kind of quiet calm.

That was all about to change.

When I arrived at Crouse Hospital, I was whisked up to Labor and Delivery and greeted by a host of specialists: surgeons, obstetricians, neonatologists and angels disguised as nurses. In front of them I surrendered my maternity outfit and traded it in for a hospital gown. I was rolled onto each side so steroid shots could be administered to my posterior to encourage the maturation of the babies’ lungs. I was also given magnesium sulfate1 via IV to slow the delivery. The word “deliver” was one I was not prepared to hear as my actual due date was in June.

If the babies were born at 24.6 weeks, they’d have a 60 percent to 70 percent chance of survival. It would also mean an extensive stay for them in the neonatal intensive care unit, better known as the NICU. And the mere thought kept me up for three nights straight, later telling the nighttime nurses, “Ambien2 is a joke.”

On that third day, giving in to exhaustion, I rested. And settled into what would be my home for the next 23 days.

When anyone asks how I survived, I tell them I had my playlist on my iPad Shuffle cued up to my favorite tunes. Aside from my morning ritual of catching Live with Regis and Kelly, the only thing that was a certainty during my stay on the seventh floor was me listening to my songs—and sleeping, a lot.

If bed rest was only as easy as the lyrics painted in that song.

In 2007, bed rest was pretty common, especially if you were expecting more than one. The thought is to keep the woman immobile in order to give multiples a chance to make it as close as they could to 40 weeks gestation. Of course, 40 weeks is the goal for one, 37 to 38 weeks for twins, and about 35 weeks for triplets.

For me, bed rest actually began before my admission to the hospital. At about 20 weeks I had developed a nasty upper respiratory infection. I was taken out of work and told to stay home.

I called it “house arrest” because it sounded cool. I could only go up and down the stairs twice a day. By then I was sleeping in a reclined position on our couch. And eating. And trying not to make multiple trips to the bathroom.

Hospital bed rest made the twice-a-day trips up and down my stairway at home seem like a vacation. That’s because once I was placed on official bed rest, the only travel I was allowed was to an in-room commode—and for that I needed a nurse or an aide to get me situated.

When I was not falling asleep due to the magnesium sulfate and the nurses checking vital signs every four hours, bed rest was incredibly isolating, especially at night when my mind could wander and worry. Sure, Rob and friends would visit, but how boring it was after hours. I didn’t want to bother the nurses, but I felt like I bothered them a million times a day.

As for activity, there was some. That’s if you count a daily parade where I was wheeled downstairs to the ultrasound room as an activity. Most of Syracuse got a good look at me during the daily trek.

And then there were the “false alarm” days, where Baby A would be so sound asleep during an ultrasound that I took a ride up to Labor and Delivery. She pulled that on us three times. By the fourth time, at week 28, Baby A had had enough of Babies B and C standing on her, taking her food and disturbing her sleep. So, A made a break for it. My water broke Thursday night during a marathon showing of NBC’s The Office.

Of course, my husband had gone home for the night. I called him just after midnight to tell him it was time and that he needed to return. The nurses told me to remind Rob that this might be a false alarm.

“Take your time, they are going to try to stop things,” I said.

But this time it couldn’t be stopped. In the delivery room I tried to call my sister in Utica but a nurse quickly lifted the cell phone from my hands.

And, in a brief yet frantic moment, the babies were delivered minutes apart. At 2:06 a.m. Baby A was born, followed by Baby B at 2:07 and Baby C at 2:08. I was too afraid to ask about them right then.

Rob came in at 2:09, and the isolettes were whisked by us toward the NICU. I saw some rapid movement but don’t remember hearing any cries at all.

The next thing I knew, I was being wheeled toward the NICU with Rob by my side and my sister waiting in recovery. Along the way Rob had the opportunity to ring the hospital chimes to announce the births of the babies.

And for the first time in a long time I cried. Hard.

And the lyrics burned deep into my mind:
I’d love to feel
Your hand touching mine
And tell me why
I must keep working on.
Yes I’d give my life
To lay my head tonight on a bed
Of California stars.

But a relaxing night of sleep would not come for miles from this moment. The next hurdle was ahead: going home to recover while our triplets struggled to thrive among the isolettes, monitors and wires, at the Crouse NICU.

1 Magnesium sulfate is given to women at risk of delivering between 24 and 32 weeks in an effort to slow delivery. According to the Mayo Clinic website, magnesium sulfate may also reduce a specific type of damage to the brain for babies born before 32 weeks gestation.

2 Ambien is used to treat insomnia and is considered a class C drug for pregnant women. The benefits (in this case, sleeping) outweighed any side effects. Ambien has been known to cause users to engage in activity that they later don’t recall. In my case, I was only on Ambien a few nights.

3 Bed rest isn’t recommended unless there is an extreme case such as in a high-risk pregnancy like mine or for women who have experienced preterm labor in prior pregnancies. Be sure to talk to your doctor to weigh your options and determine what is best for you and your baby.

Sweet Dreams: When will a newborn let parents get some sleep?
Co-Parenting: Child-rearing means communicating, even if you’d rather not
To Top