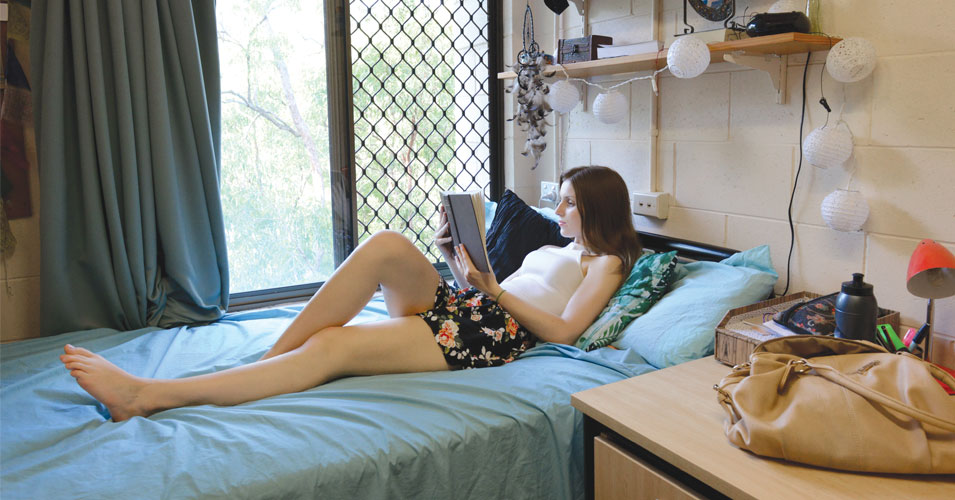 Many college freshmen are living away from home for the first time, and deciding how to make a college dorm feel like home can be challenging.

Many college freshmen are living away from home for the first time, and they’re often sharing a room with another student. Deciding what to bring and how to make that new living space feel like home can be challenging.

Terra Peckskamp, director of the Office of Residence Life at Syracuse University, has seen just about every possible freshman scenario in her 18 years on campus. She has learned that styles and preferences may change, but some basic strategies can ease that transition to dorm life. She and two current students and the parent of a current student shared their thoughts on how best to prepare.

Dorm rooms are no bigger than the ones parents lived in when they were in college, Peckskamp says. “Dorm rooms are still small. So whatever you are planning on bringing, cut it in half.”

Make a list of essentials and another for “maybes,” suggests Michelle Turtschin of Cicero, whose son Michael DiMatteo attended the Embry-Riddle Aeronautical Institute in Arizona last fall (and is transferring to the Daytona, Fla., campus this fall). “We did not bring anything with us except clothing,” Turtschin recalls. “We bought everything for his dorm when we arrived there.”

She adds, “It’s easier to add things (to the room) later than to have a bunch of stuff with nowhere to put it.”

Austin Philleo of Fayetteville, a junior political science major at Le Moyne College, says he brought basics, such as bedding, from home and tried not to bring items that had to be stored. Lauren Cussen of Clay, a fifth-year biomedical engineering student at the Rochester Institute of Technology, initially brought too much.

Read: “Season of College Admissions: A teen explores his options, parents in tow”

“I wish that I hadn’t brought every pair of shoes and every clothing item that I owned because there just isn’t enough room to store it all and I only ever wore five outfits,” she says. However, she adds, students should not leave home without a good pair of boots and a pair of shower shoes.

Students may not consider stocking up on food, since most freshmen are required to purchase a meal plan—but they should. “I do wish I had packed more food, even though it is easy to go and get,” Philleo says. “Personally, I went through my food supplies rather fast.”

Turtschin encouraged her son to think about instances when he might be too busy or just did not want to go out to the dining hall. “I also used Amazon Prime and Prime Pantry to get him stuff quickly,” she says.

Microwaves, mini-refrigerators, and cleaning products are items that Cussen suggests can be easily shared with a roommate. “And maybe even a television if you have the same interest in shows,” she says.

Television, it seems, is going through something of a transitional phase in dorm life. “Although you may miss out on a deal, I think waiting to buy a TV is a really good idea,” Philleo says. “It may not be a large investment, but I barely ever have time to use mine.”

Philleo uses a laptop to watch movies and shows. And Peckskamp says campus-housing administrators across the country have noticed the trend and are evaluating whether they even need to offer cable service anymore.

3. Make your space your own

Peckskamp has observed general differences in how guys and girls approach their new spaces: Guys bring only what they need, while the girls tend to be more concerned with aesthetics. “What has changed in more recent years is how elaborate the decorating can get. Retailers have homed right in on that.”

Lofting dorm beds to make better use of space has been a trend for many years. “It’s still popular. The university used to provide cinder blocks, but now retailers make sturdy, plastic ones in kits,” Peckskamp says.

No matter how far students are from home, having something personal with them can make the adjustment easier. “I brought some pictures of my family and pets, blankets, and even my own desk chair so I wasn’t using the generic college dorm chair,” says Cussen.

Electronic devices have made it easier than ever for students to bring personal photos with them to campus, but other requests are more difficult to manage.

“We are seeing more emotional support animals coming to campus,” Peckskamp says. “Cats, dogs, snakes, hedgehogs; that is definitely a new trend. We used to have maybe one or two support animals on campus each year. Now there are 10 or 12. Arrangements have to be made so they don’t interfere with other students.”

5. Be open to change

If there is one benefit to seeing college-bound students leave the nest, it might be seeing them develop important coping skills—tolerance, negotiation and basic housekeeping among them. But some lessons don’t come easy.

“I learned that I can’t live in small quarters with someone who is incredibly messy,” says Cussen. “I definitely became more tolerant of living in a smaller space because I ended up with less and less room as my roommate’s items took over the space.”

Living in close quarters, conflicts are bound to arise. Peckskamp says managing them is best left to the students themselves and the housing staff at their schools. At SU, resident advisers help students negotiate agreements to encourage peaceful coexistence. Other issues, such as time management and housecleaning, often fall in line with the students’ personal needs.

“Go in with an open mind and leave your dorm room door open,” Cussen advises. “People walking by will stop in and say hello, and this will allow you to meet many new people and make connections on your floor. Don’t be afraid to meet new people.”

“Just be open to the change of living space,” Philleo says. “It does take a month or so (before) it doesn’t feel like you are at a weird overnight camp. But it grows on you and you will get used to it.”

Man of the House: An outnumbered dad on raising 4 daughters
Talk About Suicide: Adults can help troubled teens by starting a conversation
To Top