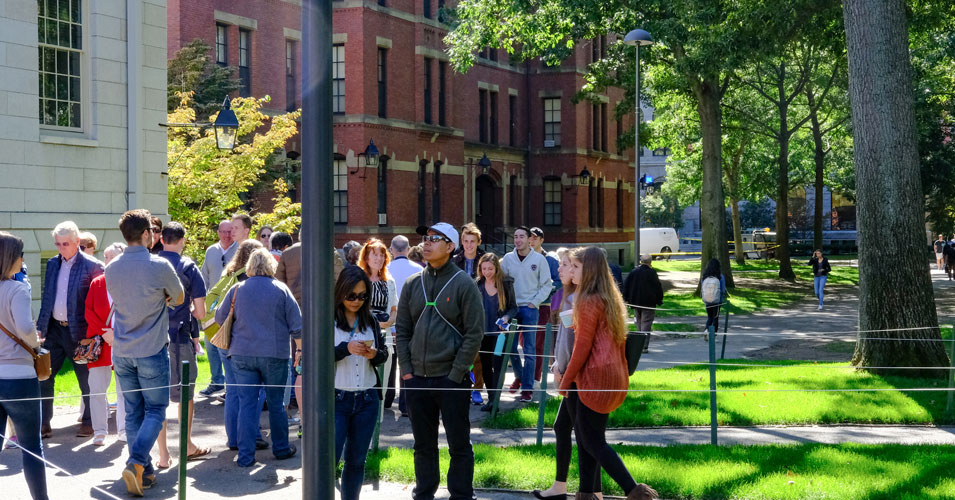 It’s 5:12 p.m. on a random-summer weekday evening, and I am struggling to keep up with my 17-year-old son and his friend as we are whisked around the north end of a college campus in northern New York. We were late arriving, as usual. It’s raining, and the guide wants to get us back to the admissions building before the staff leaves for the evening.

By now, as this is our 10th campus visit, I’m well aware of how colleges market to students these days: Hype up the abundance of food choices, technology and the sports facilities; head to the library only if asked. To appease the parents, mention the access to tutors and tout the post-graduation job placement rates. I’ve got it down.

The boys are polite to the guide as he goes through all the requisites. But I know that look on my son’s face: He’s checked out. His responses are monosyllabic. His shoulders are starting to slump.

And he’s avoiding my comments about how much I would have LOVED to go here! (Comments meant to encourage our plucky tour guide, whose face falls slightly when my son asks no questions.) He’s already decided that this college is a no-can-do. The only thing he wants to hear now is the list of restaurants we will encounter on the ride back home.

This is it: My older son is a senior in high school, and the planning of post-high school endeavors has been well under way. To be honest, this is not what I pictured just a few years ago. The mothers I knew with older children seemed to make it sound so exciting. I listened to the tales of “Jimmy’s college search” and “Mary’s senior night” with awe.

Those parents were enjoying the fruits of their parenting labors — sons and daughters who were ready for their next step into adulthood. They all seemed to be having fun exploring college campuses and pondering scholarship offers. For many of us, the reality can be something else.

For me, my son’s college search was, and still is, a constant exercise in restraint. I myself began my college experience in an associate’s degree program at a state school about 40 minutes from where I grew up. When a local editor offered me a weekly column before I graduated, I postponed transferring to a four-year college in order to focus on work. It took me another decade to get my bachelor’s degree.

As my son got further into high school, I encouraged him to learn from my mistakes. “Choose your college carefully and make sure it’s a place you will want to identify with for the rest of your life,” I told him.

But maybe that’s not the best message to give a teenager when he is just coming to terms with the fact that life as he knows it will soon change in almost every way.

So I’ve been doing my best to course-correct and not project my own hopes onto his prospects. I’ve learned not to sneer when a college he’s interested in has “Tech” as part of the name. I’ve stopped saying, “College students don’t read actual books these days?” when we visit the dorm rooms. I mourn the lack of college radio stations in complete silence.

And I know other parents who have been having even less fun with all this senior-year hoopla. One mom I see often has not been home for something like the past 40 weekends. Her son is a talented baseball player as well as a strong student, and she is usually on the road with him, chasing that elusive sports scholarship. Another mother spent six months looking at colleges specializing in one major, only to have her son switch gears and choose another major  — requiring them to start the whole process over again.

The parents of a girl my son goes to school with took the opposite approach. Since the daughter wanted to attend a school clear across the country, they bought her a ticket, wished her luck, and let that young woman survey her options on her own. That’s certainly one way to handle it.

I felt that my husband and I were lucky in one respect: Our son knew what he was interested in studying. The first step in his college search was to review the websites of colleges that had the right program and make some preliminary choices.

This took several months. For him, making that move toward seriously considering what he wanted to do, and where he wanted to do it, was daunting. My husband and I did our best to let him navigate things himself. But patience is not something I have in abundance.

Once that list of college prospects got made, he could start deciding which schools would make sense based on location and cost. After some coaching from the school guidance office, we were off.

We started with a few local favorites: Syracuse University (Dad’s alma mater and Mom’s former employer) and Cornell (my son’s dream school). For my son, the newness of the process was invigorating. He sat in on a class. He made a point to meet the deans at the schools. He met a cute girl from New England who was traveling with her dad on an East Coast college tour. He seriously considered what living away from home would entail.

After quick trips to other New York cities to see more campuses, a clear favorite emerged. Afterward, other schools he visited were judged against it and none measured up, thus wasting a few perfectly good Saturdays.

Spring break of junior year was also spent on the hunt, and we visited three campuses in the Boston area in three days. One, which I thought would be perfect, he hated. One I thought would be a good choice, but my husband deemed it “too liberal” after seeing a poster promoting a series of upcoming speakers. But the last school, located right in the heart of Boston, my son’s favorite city, was different.

The energy on this campus was palpable, and it perked my usually reserved son right up. The students and staff were friendly and understanding, and seemed genuinely interested in why he was there and what he wanted to do. The lab facilities — which my son was very interested in — were impressive, and comfortably integrated into the heart of the campus, unlike at other schools.

And the atmosphere of purpose on campus was infectious; these were young people who seemed motivated and eager to embrace every moment. I thought to myself, yes, this could be where my smart teenager will find inspiration. It was the only college where he took the plunge and actually bought a piece of clothing. (I’m told this is a pretty big commitment.)

Notably absent from my son’s list were any state schools. So, my husband and I put two on ours. As “The Summer Before Senior Year” became burdened with balancing three work schedules, and my younger son’s activities, and both boys’ year-round sports commitments, fitting in those last two visits became far more of a chore than it should have been. Once the school year began, we still had one visit left.

Now, the focus has moved to college applications and essays. Before long, yet another phase will be bearing down on us: the financial aid filing deadline nightmare. Stay tuned!

Best Practices: Nonprofit the Reading League shows teachers what works
Salad Days: A young adult gets a bigger taste of independence
To Top