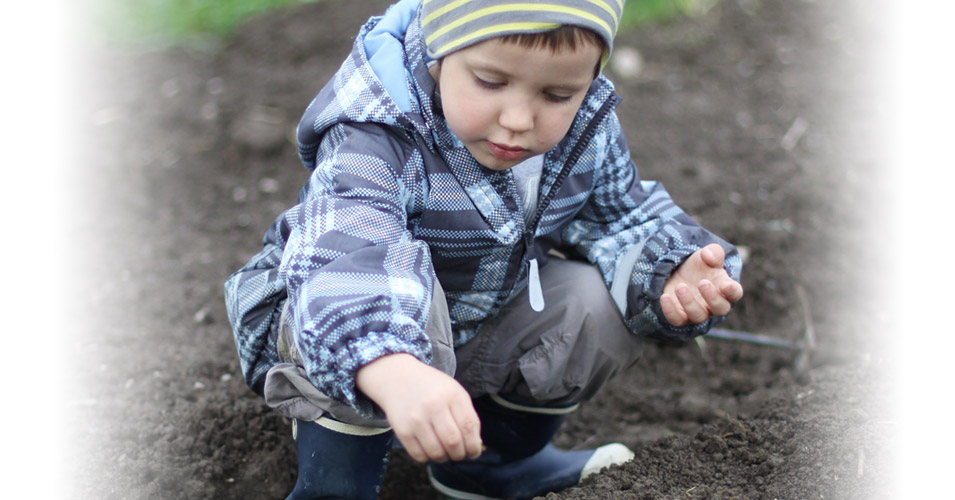 There’s so much more to gardening than seeds, soil and water, and for children, the rewards go beyond flowers, fruits and vegetables.

Horticulture encompasses the sciences, social studies, math and so many other subjects as it inspires youngsters to learn about teamwork and bond with a community, including their own families. Researchers have even found that gardening releases a chemical in the brain that makes you happier and smarter. 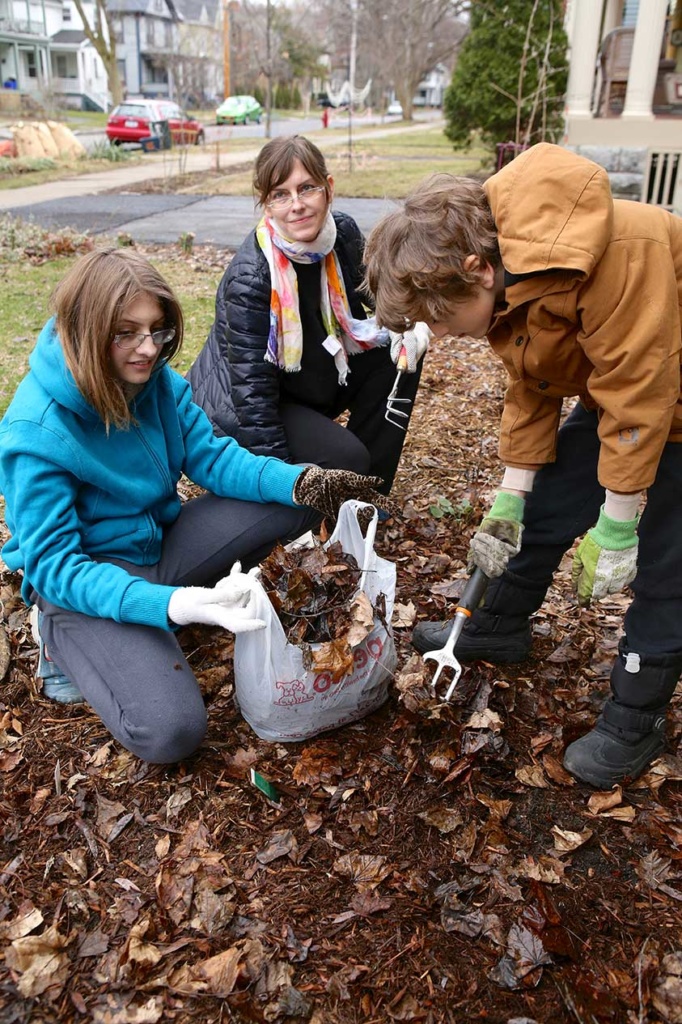 “The endorphins are released as soon as the hands are in the dirt,” says Andrea Buckvold, who gardens with her children, Sadie and Harry. MICHAEL DAVIS PHOTO

“It also improves their attention span and focus,” says Andrea Buckvold, an arts teacher and Syracuse resident who gardens with her two children, 11-year-old Sadie, and 8-year-old Harry. “It’s a good way to save children from ‘nature deficit disorder,’ where they are not making connections to the world. All those good things come from gardening.”

With the increasing popularity of urban gardening, organic products and buy-local campaigns, potential gardeners don’t have to go far to find plots where people of all ages are invited to get dirty. The city of Syracuse boasts more than 20 community gardens and educational programs that introduce children to horticulture. Some of them, including the West Newell Street Community Garden, have existed for decades.

Mable Wilson, co-founder of Syracuse Grows and an organizer of the West Newell Street garden, says in addition to all the benefits gardening brings to children, these programs also help families in financially strapped neighborhoods save money. Many folks don’t have transportation to get to the Central New York Regional Market or suburban supermarkets, and the nearby corner stores don’t offer high-quality produce. Moreover, growing vegetables like mustard greens and collard greens allows African-American and Latino children to learn about their heritage.

“These are recipes that we want our kids to keep, and pass down to their kids,” Wilson says.

Her own grandchildren were involved with the West Newell Street garden when they were little. Last summer, there were kids from 9 months old to 20 years old cultivating vegetables alongside adults of all ages. The organization also hosted summer barbecues and coordinated fishing trips and bird-watching outings.

“Yes, there’s a lot of learning going on and strengthening the community,” Wilson says. “But all the fun, that’s what we’re known for.”

Another community garden in the south end of the city, at Jubilee Homes, was established six years ago. The operation is totally organic, with no chemicals or pesticides allowed. Community garden organizers and Cornell Cooperative Extension staffers also coordinate visits to local farms so the participating children can learn about agriculture on a larger scale.

Desaree Dixie, Jubilee’s housing director, says it’s a thrill to see the children’s eyes light up when they see the fruits of their labor.

“At first, a lot of them roll their eyes because they don’t want to do it,” she says. “But when they get involved, when they get that sense of ownership, they really enjoy it.”

Dixie’s 9-year-old son, Jaylen, has been gardening for three years and has become very knowledgeable, to the point where he is instructing some adults in proper cultivation techniques. He is currently learning how to pickle vegetables, aspires to make an appearance on the Food Network’s Chopped Junior show, and is recruiting classmates to join the community garden this spring, his mother says.

“It’s not a bad way to spend some time,” she says. “It’s better than video games or watching TV.” 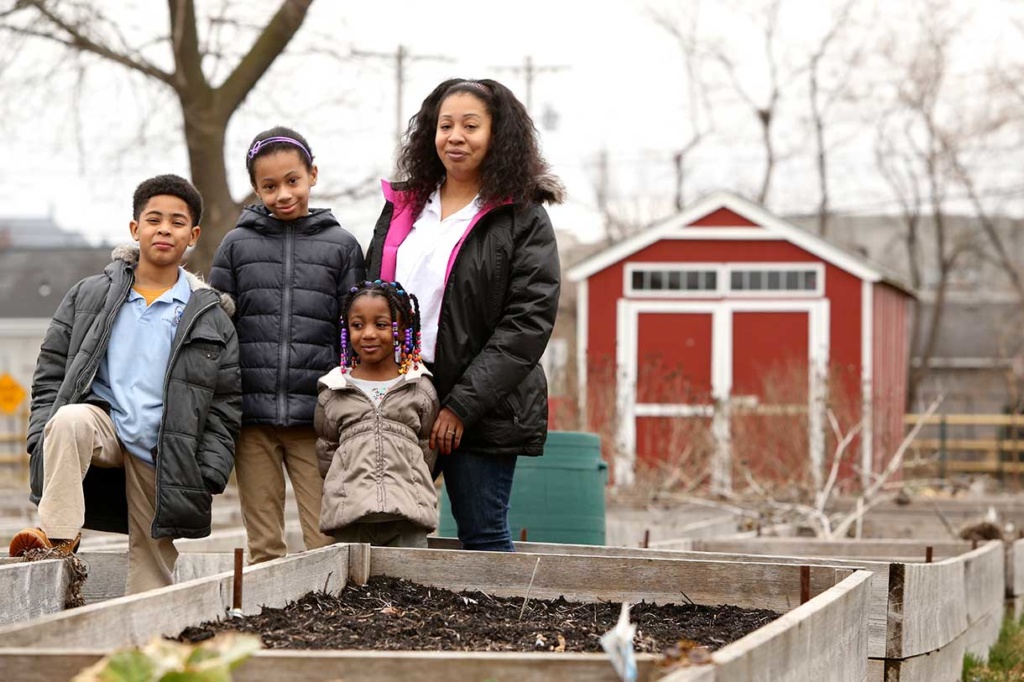 “When they get that sense of ownership (from gardening), they really enjoy it,” says Desaree Dixie, at Jubilee Homes’ community garden, pictured with Jaylen, left, and Tyreonna Dixie, and Ameena Burd-el. MICHAEL DAVIS PHOTO

Gardening is an excellent tool to teach younger children colors, dimensions, biodiversity and problem solving, says Alice Honig, Ph.D., a pediatric psychologist and professor emerita at Syracuse University. Planting a bulb in the autumn is an excellent activity for a 2-year-old, as that’s the age when children seek more control over objects and situations. It’s also a way to teach tantrum-prone children how to be gentle and kind, as a plant’s survival requires care and delicate handling.

“But it goes beyond that, obviously,” Honig says. “‘What did the plant teach us this year, and what did it teach us last year?’ ‘Do you remember what we did when it started drooping?’ We are thinking forward, and we are thinking backward. You are also learning about birds, moles, and that earth worms are a good thing. There’s an entire universe of knowledge.”

Honig adds that gardening can be a totally free activity; cuttings can be donated by a neighbor or a local nursery and replanted. “Plants,” she says, “are a nice alternative to pets.”

Evan Weissman, an assistant professor of food studies at Syracuse University and a founding member of Syracuse Grows, has a garden in his backyard and, with the help of his three young children, maintains a plot at the Westcott Community Garden just down the street from their house. The Syracuse native spent his summers picking peas, tomatoes, peppers and carrots in his backyard and helping his father and uncles run a wholesale nursery business in New Jersey.

Despite his extensive background in gardening, Weissman is still fascinated by the sight of a young child turning over a rock and observing worms or bugs. “Even in the city,” he says, “you’re going to encounter a whole ecosystem.”

Weissman is also quick to point out that Central New York, despite its reputation for long, cold winters, is an excellent region for gardening. The soil quality here is outstanding, and the growing seasons are still long enough and temperate enough for a rich diversity of fruits and vegetables. The abundance and affordability of property is also a plus.

“Suburban and urban sprawl is always a threat, but agriculture is still robust here,” he says. “There has been a dramatic growing interest in urban gardening.”

Weissman’s children especially enjoy watering the plants and selecting which pickings should go in the compost bin. They have planted seedlings and made “living necklaces” where they can observe plant germination and use the warmth from their body to help it grow.

“Never underestimate the capacity of even our youngest children’s ability to understand the world around them,” Weissman says.

Buckvold, the arts teacher and gardener, says her children immediately took an interest in gardening when they were introduced to it five years ago. They yanked out carrots to see what the vegetables would look like from top to bottom, and picked and ate raspberries on the spot.

Aside from providing a living classroom on the sciences, the family garden also serves as a sanctuary of sorts for the children. On warm days they will sit next to it and read, or lie on the grass, look up at the clouds and listen to the birds.

“Even with a small plot of land,” Buckvold says, “you can do a lot.”

The Buckvolds enjoy gardening activities year-round, planting seeds in a fish tank during the snowy months and maintaining a worm and compost bin in the basement. After Christmas they create an evergreen brush pile in the backyard. During early spring, they build birdhouses and bat boxes.

And when planting season begins, Buckvold says, “The endorphins are released as soon as the hands are in the dirt.”

Horticulture Magazine reported on a study in the United Kingdom that found a strain of bacterium in soil called mycobacterium vaccae triggers the human brain’s release of serotonin, which provides a sense of relaxation and well-being. The same bacterium has also been found to improve cognitive functions.

Another health benefit of gardening, according to the National Wildlife Federation, is the exposure to bacteria, parasites and viruses that strengthen the immune system. By contrast, children who live in ultraclean environments have a greater chance of suffering from allergies, asthma and other autoimmune diseases “that we would otherwise be protected from through the simple pleasure of playing with some nice common dirt,” the foundation reported in the article, “Get the Dirt on Dirt.”

The article also elaborated on the joy of dirt, reporting that studies show any contact with soil, whether gardening, digging holes, or even making mud pies, significantly improves a child’s mood and reduces his or her anxiety and stress.

“There’s no little kid who doesn’t like to dig,” says Honig, the pediatric psychologist. “And the rewards of growing something themselves—it’s physical and psychological. It gives them a great feeling.”

Want to learn more about growing things in your backyard? Local organizations want to help you develop your green thumb.

The Alchemical Nursery is devoted to sustainable urban lifestyles and landscapes.

Part of ‘The In Crowd’: Encountering a bit of unexpected grace among teens
Outside, Over There: Books inspire excursions in nature
To Top