Captain Marvel is an extraterrestrial Kree warrior who finds herself caught in the middle of an intergalactic battle between her people and the Skrulls. Living on Earth in 1995, she keeps having recurring memories of another life as U.S. Air Force pilot Carol Danvers. With help from Nick Fury, Captain Marvel tries to uncover the secrets of her past while harnessing her special superpowers to end the war with the evil Skrulls.

KIDS FIRST! Film Critic Benjamin P. comments, “This film makes good use of its 90s setting. There are a lot of jokes involving technology and pop culture from this period that work well. Also, the soundtrack has a nice selection of songs from the 90s that complement the film very well.” Arjun N. adds, Captain Marvel is a solid, if slightly flawed entry in the Marvel Cinematic Universe. A talented cast and savvy direction make for a crowd pleaser. Any superhero fan must watch this as the hype for Avengers: Endgame arises.”

See their full reviews below:

Captain Marvel is a fun, if sometimes flawed superhero adventure that further develops the cosmic landscape of the Marvel movies with good performances from Brie Larson and Samuel L. Jackson.

Captain Marvel takes place in 1995 and follows Vers, a Kree warrior with flaming fists on her way to becoming Captain Marvel who finds herself on Earth after a mission gone wrong. She teams up with a detective named Nick Fury to pick apart the secrets of her past. Meanwhile, Vers has to stop the shapeshifting Skrulls from infiltrating the planet and putting an end to the war with the Kree.

I like the performances in this film. Brie Larson is good as Captain Marvel and brings an understated verve to the role. Larson is good at delivering quips, but also has a few pretty powerful moments in her performance that help develop Captain Marvel as a character. Samuel L. Jackson is also good as Nick Fury. This is a different Fury from what we’re used to with Jackson offering some nuanced clues about the changes Fury will face in the future. In Larson and Jackson’s third onscreen collaboration, the duo brings great chemistry and the scenes with them playing off of each other are easily some of this film’s best moments.

This film makes good use of its 90s setting. There are a lot of jokes involving technology and pop culture from this period that work well. Also, the soundtrack has a nice selection of songs from the 90s that complement the film very well. The setting doesn’t feels like an attempt to cash in on nostalgia, but the 90s theme gives the film a more pronounced tone and humor. I also really enjoyed the element of mystery that comes with the Skrulls’ ability to shapeshift into anyone and its clever use throughout the film.

I do find quite a few flaws with this film. Jude Law’s performance as Yon-Ragg, the Kree leader, is disappointing. He feels so self-serious; it’s as if he’s in a different movie. There is a lot of exposition throughout the first half that, after a while, is a chore to listen to. Action scenes range from well-choreographed to hard to tell what is going on.

I recommend this film for ages 9 to 18, for some sci-fi violence and language and give it 3.5 out of 5 stars. Captain Marvel falls a bit short of being completely marvelous, but it’s enjoyable and well worth the price of admission. I recommend you go see this film when it comes out on March 8, 2019. 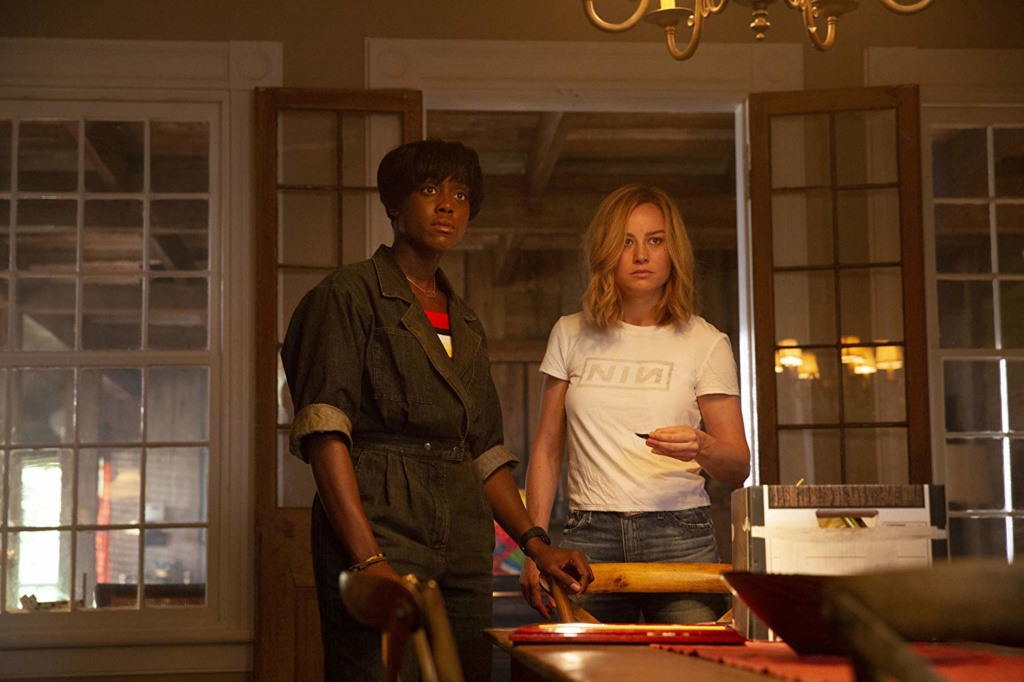 Captain Marvel is a solid, if slightly flawed entry in the Marvel Cinematic Universe. A talented cast and savvy direction make for a crowd pleaser. Any superhero fan must watch this as the hype for Avengers: Endgame arises.

The story follows Carol Danvers (Brie Larson) as she becomes one of the universe’s most powerful heroes. Set in the 90s, this adventure follows her struggle to regain her past as one mysterious incident created her powers. Amidst this, a galactic war arises between the Kree, her brethren, and the Skrulls, shapeshifting fugitives, as Carol remains the only one powerful enough to end the war. This war takes to Earth, with S.H.I.E.L.D. in its adolescence investigating. With this, Carol must team up with no other than a nascent Nick Fury (Samuel L. Jackson) as the two investigate all sides to this war.

Brie Larson, as Carol Danvers, surprised me and is my favorite character as she is nothing like what the controversial trailers portrayed – hardened and emotionless. In fact, she is very sassy and witty, like Tony Stark, and even humanizes the character with her relatable struggles. Sure she is stoic and hardened to some extent, but she does everything she needs to, as audiences need to be sold of her importance in not just Avengers: Endgame, but the whole MCU, and that’s exactly what we get. Samuel L. Jackson, as Nick Fury, is absolutely incredible, even if certain character decisions from a writing standpoint are very questionable, with one reveal just baffling. The dynamics between Danvers and Fury is one of the movie’s best, with a buddy cop feel to it. It is investing to watch the younger, more inexperienced Fury, with certain nods to his future being a neat addition. The same goes to Clark Gregg as Phil Coulson. It is a welcome surprise to see the simpler days of these two. Ben Mendelsohn, as Talos, also gives his all with his Skrull leader a formidable foe and he is more charismatic for it. As twists and turns reveal, he and his race became a sympathetic asset, with their kind being one of the most intriguing amongst the MCU roster. Last but not least, Jude Law, as Yon-Rogg, is interesting in his mentorship of Carol, and the twists regarding his character add for an emotional edge.

Anna Boden and Ryan Fledge aptly direct the film, with a stylish approach somewhat like Thor: Ragnarok. Every scene is well produced, but the style and vision are sometimes lost amongst the craft. The special effects are mostly on standard, but the de-aging effects for Samuel L. Jackson and Clark Gregg rise far above the standard. They don’t look fake, and all expressions are truly natural. We are truly in the future of seamless CGI. My favorite scene is when Danvers truly becomes Captain Marvel, unleashing her full power amongst an enemy crew.

The message of this film is to never give up. Danvers takes several hits, to the point of giving up, but she always rises up to the challenge. I give this film 4 out of 5 stars and recommend it for ages 10 to 18 due to some intense violence and language. The movie released in theaters on March 8,, 2019, so check it out.