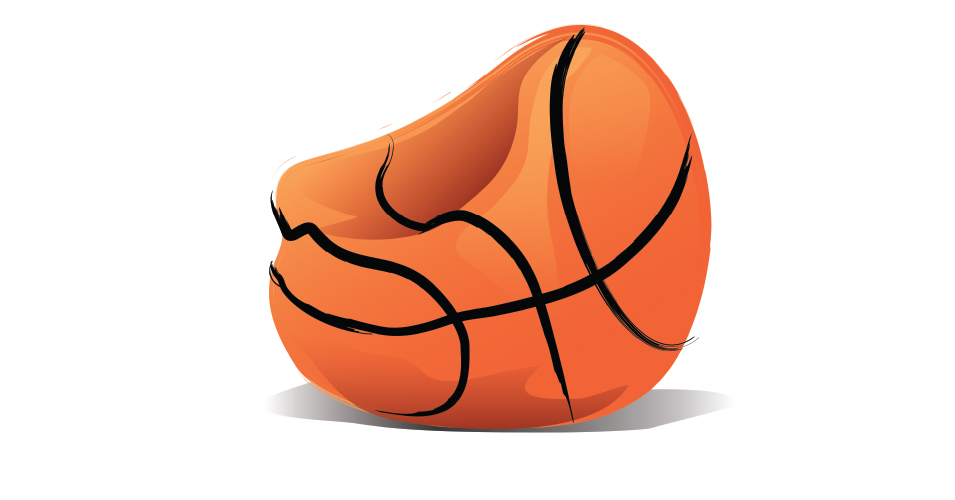 April 7, 2003: If you’re a Syracuse University sports fan, it’s a date engraved in your memory. That night, the SU men’s basketball team, led by Carmelo Anthony, completed their run through the Final Four in New Orleans, finally winning a National Championship. Hakim Warrick made the block, the final buzzer sounded, and the players piled onto one another at center court in victory. For a fan base that had seen its share of oh-so-close-defeats, the moment was glorious.

I had been watching the game at home. As celebrations began across Central New York, I turned to look for someone—anyone!—with whom to rejoice. Next to me on the couch, I found only my daughter, Sadie. Thumb in mouth and sleeping soundly, she was unprepared to high-five anyone and unaware of the history being made.

In her defense, she was 14 months old and perhaps exhausted from a day of toddling. But looking back, I wonder if I should have interpreted that moment as a sign of things to come. See, despite my best efforts, Sadie has never embraced the college sports mania embedded in our local culture. She rarely even wears orange.

With a girl as my only child, I always knew to adjust my expectations concerning things like Star Wars and Nerf weapons. I assumed that eventually I could persuade her to become an SU sports fan—just enough for us to be able to carry on a conversation. Now she’s 16, and we do have conversations about sports. In our own way.

“Are you watching the football game?” I’ll ask, having called Sadie at her mother’s house.

“Sure,” she replies. “It’s halftime of the seventh inning and they are down two goals.”

We have perfected this routine over the years. I keep attempting to indoctrinate her into Orange Nation, and she responds with willful ignorance, just to emphasize the extent of her apathy. You would think I was asking her to make sense of Quidditch.

When she was born, I had actually been hoping for a girl. I was banking on the theory that girls are less messy than boys. I had forgotten how Play-Doh, colored markers and splashing in the dog’s water dish appeal equally to both genders.

And so do sports! Gone are the societal stereotypes of the past. Although the television networks have yet to fully acknowledge the trend, American girls are participating increasingly in all sports, even ones traditionally considered to be for boys only, like hockey and lacrosse.

Not my daughter, of course. She seems genuinely uninterested in shooting any puck or ball, and even less thrilled about watching a bunch of other people chase one around for a couple hours.

Years ago, I took her to an SU football game. We sat in the nosebleed section, soaking up the chaotic atmosphere and cheering on the home team during one of their rare wins that season. It was a father-daughter bonding excursion to rival all others. In my mind, the game would be the first of many.

“Remember how fun that was?” I asked her recently.

“I remember eating popcorn,” she said. “Oh, and I remember wanting to leave.”

That outing has yet to be repeated. The Carrier Dome can apparently be a loud and intimidating place, not only for visiting teams but also for a 6-year-old girl who would have preferred a quiet afternoon of watching Blue’s Clues.

My daughter is an athlete in her own right. For most of her life, she has been a dancer. On average, she puts in more than two hours of sweat each day, learning routines and perfecting her technique. During competition season, she performs on a stage instead of a field, experiencing the same camaraderie that comes with sharing wins, losses and matching uniforms.

Related: The World’s A Stage: Where dancing can lead your child

In between her numbers, she remains completely engrossed in what is happening onstage, almost as if she is searching for weaknesses in a 2-3 zone defense. As a parent, I sit and attempt to follow along, trying not to point out the serious lack of behind-the-back passes. It has been my decade-long goal to understand the subtleties of her dance world, but I find little crossover between it and basketball.

“Did you notice that we changed the ending a little?” she asked me after a group tap performance. “There’s a double Maxi Ford just before the toe stand.”

“Right,” I agreed. “But did you score enough points to get everyone free tacos?”

The dialogue is suspiciously reminiscent of every sports conversation we’ve ever had, emphasizing how our passions don’t match. Of course, they don’t have to. She has inherited my love of dogs, photography and all things Disney. There’s no rule that a daughter has to share her father’s enthusiasms.

These days, I try to keep Sadie’s perspective in mind. Pretending to be interested in sports might be tiresome for her. Luckily, I have two nephews who fill in as fans when needed. I attended a football game with them last fall, temporarily alleviating any pressure Sadie might feel to humor me. But now, with basketball season in full swing, it might be time to test the waters again.

“March Madness is almost here,” I will say. “Do you think SU will make the tournament?”

How to Argue with Your Teen: Turn your disagreements into communication, not conflict
Diverse Strengths, Diverse Needs: The Kurpiewski family navigates life with positivity and gratitude
To Top