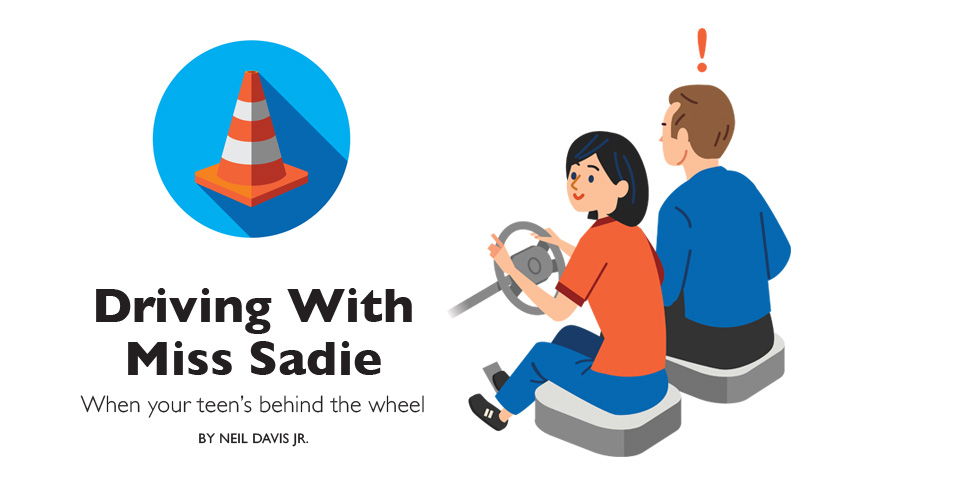 Buckle up. Start your engines. Your teen just passed the driver’s learner permit test and is ready to hit the open road.

Buckle up. Start your engines. Your teen just passed the driver’s learner permit test and is ready to hit the open road. For years, you have joked about parenting being a wild ride, but that notion is about to become an unnerving reality.

If you’re like me, handing over the keys will come with some apprehension. Driving, perhaps more than any other rite of passage, symbolizes a giant leap into adulthood. Your world will flip as you ease into the passenger seat and stare over at the young man or woman who, it seems, only months earlier learned how to operate the microwave. “How does someone burn a Hot Pocket?” you recall thinking to yourself.

Now suddenly, at 16, that same child has reached the age that the government considers legally mature enough to pilot a two-ton machine at breakneck speeds through unsuspecting city streets. Have they ever met a 16-year-old?

Statistically, I have less to worry about than some parents. My daughter, Sadie, being a girl, falls into the shallower risk pool, the group of adolescents less concerned with impressing their friends with fearless risk-taking. Instead of testosterone, Sadie’s brain is fueled largely by Netflix and Lululemon. She is neither fast nor furious, and knows nothing of torque, turbo or transmissions. You may argue that boys can be just as prudent as girls, but your insurance premiums and Vin Diesel will continue to suggest otherwise.

I still worry, of course. Sure, my daughter is adept, cautious, and gives every impression that she understands the dangers of the road. But she was also as inexperienced as they come, even lacking the mock digital training that most teens get on their Nintendo.

The last time Sadie had taken the wheel of anything was her Power Wheels Barbie Jeep Wrangler at age 4. It was pink, plastic, and on a full charge topped out at 5 miles per hour. Her leisurely joy rides up and down the driveway were far scarier for our dogs than for me.

My true concern likely related to the memories of my own youth, with all those evenings cruising aimlessly with my friends until my father’s gas tank was empty. Back then, driving was the ultimate 3-D experience, and our ticket to freedom. Of course, by our definition, freedom usually meant Burger King. Still, we somehow managed to lose a few hubcaps, sustain some unexplained dents, and collect an occasional speeding ticket. I even once hit a deer (entirely the deer’s fault).

Read: “Drive Time: How can we keep teens in cars safe?”

Given all that, I hardly seemed qualified to teach my daughter how to drive. But that’s how it works. Parents are expected to understand right-of-way, the three-second rule, and when to check your blind spot. There’s an assumption that over time we naturally develop the knowledge and expertise required to train a beginner, although one afternoon spent in rush hour traffic on I-81 is enough to cast doubt on this entire system. Parents are, after all, human—and driving has a way of highlighting how fallible we all are.

Except me, of course. After college, I spent eight years honing my driving skills on the mean streets of Boston, the city where commutes are measured in gallons of coffee, and every baby’s first word is “traffic.” I just needed to recall all of that white-knuckled terror and translate it into teachable moments with Sadie behind the wheel.

The important stuff came easy, like where to find a good oil change coupon or directions to Brooklyn Pickle. But I also brushed up on the NYS Driver’s Manual found on the DMV website, preparing myself for any technical question that my daughter might throw at me. How many feet should you park from a fire hydrant? Fifteen. What does a double yellow line mean? No passing. Can I borrow the car
on Friday to go to a concert? You must
be  joking.

I was ready for anything, expecting my daughter to challenge me on the complex rules of the road. Then, settling nervously into the driver’s seat that first time, she asked, “Which one is the gas pedal?”

Oh dear. What had I gotten myself into? I thought maybe she had picked up a few things just by riding shotgun, but everything was apparently new to her: each button, switch, light and sound. That was the moment I realized my role as passenger would be an active one. I was going to have to actually instruct her, to pay attention, to occasionally slam my foot on an imaginary brake pedal while clutching the dashboard.

I’m happy to report that it has been going well. Today’s teens have grown up with technology, so they easily adapt to the electronic gadgets in modern vehicles. The Chevy station wagon that I learned to drive on was the length of a tennis court and barely had FM radio; parallel parking felt like docking a yacht. But now cars are effortlessly maneuverable, aided by things like backup cameras, forward collision warning and lane-keeping assist. Drivers just make suggestions, and the car decides whether or not to follow them.

Still, if you’re teaching your teen to drive, my advice is to start slow. Schedule some practice time rather than just saying, “Hey, why don’t you drive to the mall?” Find an empty parking lot to circle around. Try to refrain from shouting unless catastrophe is imminent. It’s supposed to be a positive experience, for both of you.

Most importantly, lead by example when you are driving: Never text, always (actually) stop at stop signs, etc. This will drive the point home (as it were) that you expect the same of your child.

As with every new stage of my daughter’s life, I’ve tried to strike that balance between scaring her and encouraging her to enjoy her freedom. There are few other options. You can let them Uber, which I call “organized hitchhiking.” You can keep playing chauffeur. Or you can realize that your children are going to grow up and have new, wonderful adventures. And sometimes, you are just along for the ride.

Mentors are key to a satisfying life for a person with a developmental disability
Fueling Performance: Learn about nutrition for a teen athlete
To Top