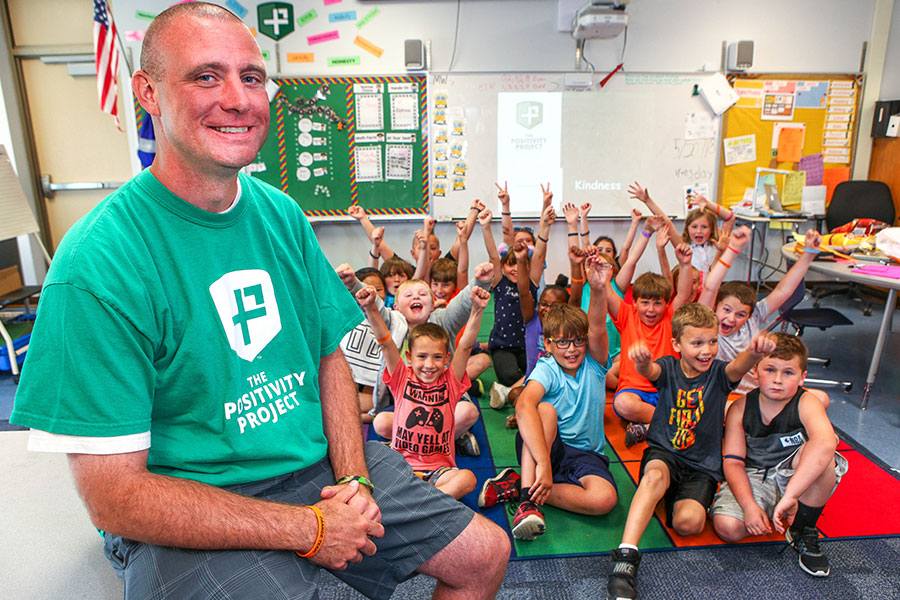 The Positivity Project came at a time when second-grade teacher Marc Herron needed some words of encouragement. After watching close friends Sheila and Scott Ungerer deal with their son Luke’s cancer diagnosis, Herron went on a mission to become more optimistic both inside and outside of the classroom. He already helped raise funds for the St. Baldrick’s Foundation, in honor of Luke, but he wanted to do more.

Then he started reading positive quotes by his friend Mike Erwin, posted on Facebook. Erwin, a fellow Central New Yorker, created the Positivity Project to spread powerful words and actions to people of all ages. Herron’s interest combined with Erwin’s posts led to the beginning of a schoolwide program that Herron and his colleagues eventually started at Morgan Road Elementary School in the Liverpool Central School District.

Since 2015, the Positivity Project has gone from one school to many others across Central New York and beyond. The project’s curriculum aims to teach students character-building skills demonstrating the interconnectedness of all people, using the phrase and hashtag #OtherPeopleMatter.

Herron lives in Syracuse and has three children, 5-year old twins and a 2-year-old. Sistina Giordano recently discussed the details of the project with him. (This interview has been edited and condensed.)

How did the Positivity Project start?

For me it started with Mike Erwin. He is the founder. We grew up together and we went to elementary school and played basketball together and just stayed in touch throughout the years. He was in the Army and has always been actively involved in helping people.

He started posting different quotes and messages on Facebook, and I have always been into character education at school so his posts caught my attention. Being able to shape a student’s character was one of the biggest reasons why I wanted to get into teaching, so I started simply taking his messages and using them in my own classroom. Eventually I reached out to him to let him know how helpful I thought they were. I said to him, “I don’t know what this is but I want this in my school.”

How did it all come to fruition as something within Morgan Road Elementary?

It initially started with a conversation about what it was, which is positive psychology. Myself along with three other colleagues, Meg Hurley, Sarah Angotti and Amy Figger, put our heads together to come up with a plan to bring to our principal. After speaking with Mike, I knew I had to get my principal on board. Brett Woodcock knew Mike and knew what he stood for; he agreed that if Mike was doing this then this was definitely something worth doing.

How and when was is it implemented in the school?

We started the Positivity Project in September 2015; prior to that it was just us talking with Mike and him giving us the knowledge of what he knew to be able to make it happen. Initially the criteria for the project was to teach our students 24 words within the project. As teachers, we knew that 24 words in one school year was a lot. We didn’t think it was possible at first, but Mike was insistent that we needed to teach all 24 words.

Mike sent along examples of what he thought we could do, and we worked to make it possible for our elementary students. We created PowerPoint slides for our entire building to use and we came up with a four-day schedule. Teachers at all levels from kindergarten through sixth grade would teach the Positivity Project for 10 minutes in their classroom four days a week. Each week focused on a character strength.

How do you attribute this coming together, especially since it was a challenge at first?

My colleagues are amazing and they are the ones that really helped propel this forward. We had quotes, video clips, activities that we could use. We came up with different ideas including fictional characters and real-life people that we could attribute the lessons and words to. Our greatest challenge was not only teaching all 24 words but doing so in a way that the lesson plans could be used at all levels.

Can you give us a few examples of what a lesson might look like or some of the words you’re teaching students?

Some examples of the words include kindness, zest, social intelligence, humility. But what’s important to note is that some of those words on the list, like “social intelligence,” they really made us think. So we knew that we had to come together to figure out how we could teach those words in a way that students would not only understand but then absorb the knowledge and then know how to recognize it.

How has the Positivity Project changed over the years?

The first year, our PowerPoint presentations are what did it. Since then, we’ve expanded to include different ways that we can reach out to students. As an example, we found a Disney character or cartoon that showed or possessed one of the strengths.

We are still very much in touch with Mike. Now fast-forward a few years and he has a whole team creating this project for schools in other areas. Now these words are part of our everyday language and we don’t necessarily use the PowerPoint presentations anymore.

It’s no longer at a separate time, either. The project started out as 10-minute blocks but even in the first year we realized that this is language that you use all day long. For example, in math and science we use these words to help students by saying “We know this can be difficult but we want you to persevere.” And those words then take on positive reinforcement as well. We’ve also used the language when there’s an issue in the classroom. It’s really become common language. Not only that, our principal made it a goal to then have every student know what their own strengths are.

What has the response been from students?

By the time they get to the upper levels, kids not only understand the words but they’re using them in proper context. It’s also taught students to realize that they can find similarities within themselves. They may not excel in certain subjects, but their top strength could be “kindness,” and regardless of how you solve a math problem, you can bond on the common ground that you share that same strength.

What is the response from parents?

I’ve chosen to implement the words and ideas behind the project with them through our parent-teacher conferences. I talk with them about their students’ strengths because it’s a nice thing for a teacher to be able to pick out something that their students are excelling in. Even if the student is struggling in an area, when you can still find their strengths and focus on that, it’s positive reinforcement for the parents as well.

My principal was instrumental in getting everyone on board. His willingness to really get this off the ground has helped with parents, too.

We do a lot on Twitter and we reached out to the community as well to help us create different videos. The idea was that we chose a different person or parent and showcased their strengths.

An example was a parent who is a Syracuse police officer. We showed students and the community how his bravery is a strong character strength and how he shows bravery each day.

Parents have also been involved to guest-speak. They say that they not only use the words at home but that their children have taken the message home and the lessons continue long after the bell rings.

What is the goal of the Positivity Project?

The goal is to implement it in as many schools as possible. We’ve definitely tried to get the message across by word of mouth. I try to talk about it with other teachers and parents when I can. I’m a believer and it’s not hard to be a believer because it’s tried and true. My principal has been an active part of trainings in the area. It has multiplied quite a bit since its inception. It’s part of the Liverpool and Westhill elementary schools. And those are just a few of the Central New York schools that are participating.

We also have a phrase or hashtag that we use: #OtherPeopleMatter. That is the mindset we are trying to instill in our students. Using their strengths to build relationships and help a fellow person. It could be as small as asking how someone is doing or as big as raising money for a cause. My school has been behind my efforts with St. Baldrick’s from the get-go, and that has been a way to teach them how we can use our strengths to have an #OtherPeopleMatter mindset.

What is the greatest lesson you’ve learned from being part of this project?

The biggest lesson is really building relationships with other people that might be different than you, that we’re a lot more alike than we realize. When you take away all the superficial things about yourself—really these 24 words are within us and you can find those common words within other people. The differences, too, help form relationships because different people’s strengths help you out. Someone else’s strength of bravery can help you be brave. That’s what we want to do: Make sure that the kids are using their strengths to help others.

Sistina Giordano is co-host of Bridge Street on WSYR-Channel 9. She was born and raised in Sault Ste Marie in Ontario, Canada, and now makes her home in Central New York, with her daughter and son.

Managing in Middle School: Parents can help kids cope by paying attention to critical factors
Brewerton dance class allows children with disabilities to grow at own pace
To Top