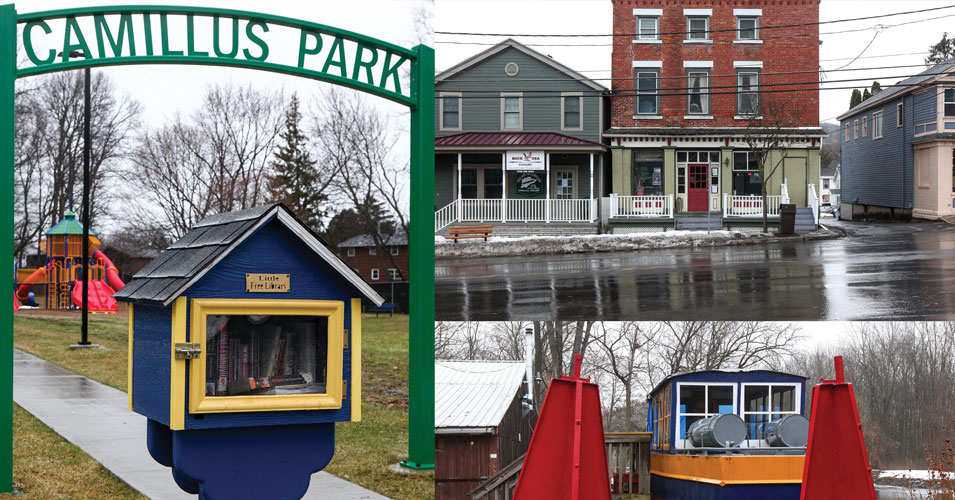 If you’re seeking a place to raise a family, don’t overlook Camillus. Despite Route 5 (or Genesee Street), the busy thoroughfare that runs through it, the western suburb encompasses many peaceful neighborhoods and lots of families. Twenty percent of the population is under age 18, according to town and census data.

“It’s a pretty area, with the rolling hills and the topography,” says Terri Micho, an associate broker at BHHS CNY Realty.

Camillus was founded in March 1799. The elevation varies throughout the town, creating picturesque horizons and natural-looking city planning. The space comprises 35 square miles, with a population of about 24,600. Along with the main town center, Camillus has a smaller village section nestled at the base of a hill to the west and three hamlets: Fairmount to the east, Amboy-Belle Isle to the north and Warners to the northwest.

People consider moving to Camillus for many reasons, but most are looking for a quiet, safe place to make a fresh start, Micho says. Some grew up there as children and want to return home, others wish to start their own family, and some are widows or widowers in search of a slower-paced life.

Camillus has a small-town feel, without feeling too isolated. Like most upstate New York towns, it is a balance between rural grasslands and developed commercial business districts. The varied selection of housing makes it easy to accommodate everyone, from those looking for an economical starter home to people wanting more luxurious properties, Micho says.

A venue for casual get-togethers, Rise and Grind café, opened last year. Owner, Camillus resident and mother of three Martita Richardson told the Syracuse New Times she often sees families come into her shop, with parents getting coffee and the children grabbing some hot chocolate.

The town also has several clothing stores—including a Dress Barn and a Famous Footwear—within its borders and is about a 15-minute drive from Destiny USA. The Thruway and Route 5 both run through the town, giving residents easy routes to work and other destinations. Micho says the Finger Lakes region, only about a 45-minute drive, is another draw.

Camillus’ high-traffic streets and shopping areas don’t make it very walkable, but it does have many options for recreation. It is dotted with public parks, the largest being Camillus Park, near Genesee Street. The park has two large playsets, tetherball poles and swings. There’s no need to worry about children running off into the street, as the park has its own entrance road and is lined by residential back yards. Surrounding it is expansive wooded grounds with picnic tables, grills and a bathroom area.

There are three trails winding around the trees of Camillus Park with a sign ranking their difficulty. All three are manageable for children, bicycles and strollers, and there are pet waste bags provided for dog walkers’ use.

For more outdoor activities, residents can look to the Camillus Forest Unique Area, a 350-acre stretch of woodland that’s free to enter and is commonly used for hiking, fishing and bow hunting.

Eight smaller parks can be found around the town, most of which include a playground, picnic area and other similar amenities. The one that doesn’t is Erie Canal Park. Visitors there can go on boat tours—including a dinner cruise—and explore walking paths and an on-site museum with a history of the canal, Nine Mile Creek and the nearby aqueduct. The aqueduct and the Wilcox Octagon House, built in the 1850s, are on the National Register of Historic Places.

The district has a graduation rate of 97 percent, with about 94 percent earning a higher-level Regents Diploma last year, according to the district.

The special education program and the marching band are two of the standout features.

The school developed its own in-house programming to keep special needs students on school premises and balance their time in the classroom, limiting the need for BOCES services. This helps ensure they get the attention they need.

“I think this makes a big difference for lots of folks,” says Susan Murray, director of special education.

There’s also a Parent-Teacher Association specifically for parents of special-needs children and two unified sports teams (basketball and bowling) that compete in the Special Olympics.

For Camillus residents, the median household income is about $65,000 and the median cost for a home is estimated to be $150,000. The total tax rate (county, town and highway rates) is 11.97 for the town and 8.86 for the village. Single-story ranch style homes dominate the real estate market, although two-story residences are not uncommon, especially as one travels farther from the concentrated areas around Genesee Street.

Because the town can be alluring to people of all walks of life, it is usually a seller’s market. Many homes end up with multiple offers, Micho says, and prospective buyers keep opportunities on their radar for a while, waiting for their ideal home to open. But she says that’s a testament to the town’s charm.

“Honestly, nothing about Camillus stands out as a negative.”