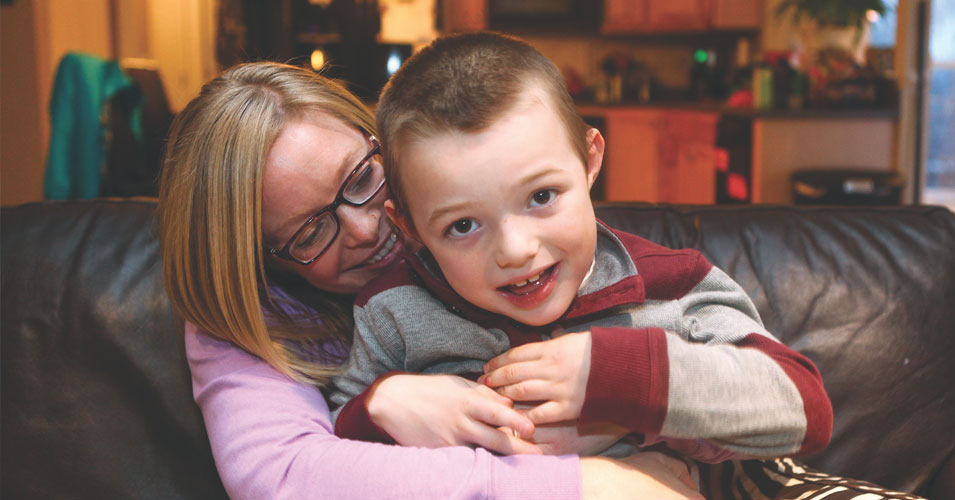 Isaiah Pierce, 14, wants to get a job and an apartment after he graduates from high school. His brother Ethan, 15, wants to get his driver’s license and is planning to go to college. In the meantime, their parents, Samantha and Jeremy Pierce, are deeply involved in making sure the boys get all the special services they need as students diagnosed with autism.

Today, about one in 68 children in the United States is diagnosed with autism spectrum disorder, or ASD. The disorder can look very different from child to child. For some, it is characterized by difficulty making eye contact, an inability to understand social cues and a fascination with topics to a point others find off-putting. For others, the severity of autism is profound and affects every aspect of a family’s life.

Melanie Bruce has a video of her youngest son’s first birthday. A happy child who never fussed, Caden can be heard saying “Mama” and “Dada” in the video. But within six months, he stopped speaking, a regression that is sometimes seen with children on the spectrum.

He is 6 years old now and still doesn’t speak. He makes a humming or babbling sound that can get louder or softer depending on his mood. But he does not use words and, his mother notes, is not yet toilet trained, despite great efforts.

Caden can communicate using an iPad app that lets him indicate when he wants something. On a recent rainy afternoon, he wanted to play with a hand-sized ladder toy. He pressed a finger to the tablet’s screen on the word “ladder” and a colorful picture of a ladder. A male voice from the iPad said, “ladder,” and he was soon playing with the toy, humming happily when his older brother, Cael, arrived home from school.

Melanie Bruce, who works as a physical education teacher in the Baldwinsville school district, moved Caden from one school to another to get him into programs she thought would serve him best. She takes him to the Rochester Regional Center for Autism Spectrum Disorder at the University of Rochester Medical Center. It is one of New York’s six regional centers — and the one that serves Onondaga County residents.

“It is so worth the drive,” she says, praising the doctors at the center for spending time and remembering to have handy one of her son’s favorite toys, pipe cleaners.

When children are diagnosed with ASD, parents have many different questions, says Suzannah Iadarola, an assistant professor at the University of Rochester Medical Center.

Her answer to Question 1 is: “Your child is always going to be on the spectrum. You can help your child be successful and independent.”

To Question 2, she says, “The best intervention is dependent on the individual child, and we always want to choose interventions for which there is evidence.”

Because no single intervention works for every child, parents find themselves researching to find what treatment or therapy or teaching method is most effective. There are books and websites and support groups and consultants and, of course, doctors.

Many parents build a level of expertise on the disorder. Melanie Bruce spends hours on the internet reading about different ideas for helping children with autism, including ones she and her husband, Ronnie, ultimately dismiss as outlandish.

Samantha Pierce is active in the Ed Smith Pre-K-8 School Parent Teacher Organization, as well as the Syracuse City School District’s SPEAK-A program for parents of children with autism. She is also applying to be part of the state Autism Spectrum Disorders Advisory Board, a committee created by state law last fall.

She is so focused on better understanding her sons’ condition that for her birthday one year, Jeremy gave her her own copy of the Diagnostic and Statistical Manual of Mental Disorders, the diagnostic tool used to define, and redefine, autism and other conditions.

Ginger Ott, of Syracuse, has three sons on the autism spectrum. She has tried a variety of methods to help her sons learn and deal with their sometimes-violent outbursts. She has taken parenting courses and developed some methods of her own, based on what has worked with her boys.

The knowledge parents gain comes in handy when others ask about their children. Samantha Pierce fields lots of questions about Ethan and Isaiah. Children will ask, “Why’s he lying on the floor?” or “Why’s he making that noise?” she says. “‘Because it makes him feel comfortable,’ I’ll say.” (Sometimes children under age 10 will ask if they too can lie on the floor.)

Adults can be more challenging, Samantha Pierce says. Isaiah’s diagnosis includes a lack of impulse control, and he sometimes strikes out unexpectedly. For a while he took to greeting people by kicking them in the shins. When other parents react to this, Pierce says she’ll make the effort to explain that he is diagnosed with autism and the impulsiveness is just how he is. “I don’t have to acknowledge the negativity in their voice,” she says.

Just a few decades ago, many of those diagnosed with autism spectrum disorder would have been institutionalized. Today, it is more common for students with the disorder to be educated in a mainstream school and provided with assistance that can include an aide who stays with the child one on one through the school day. Other adaptations can include extra time for tests and assignments.

“We have to make accommodations, like a wheelchair is an accommodation or like glasses are an accommodation,” says Annegret Schubert, an autism specialist with the Syracuse City School District who has been working with children with autism since 1980.

She says there are about 260 students diagnosed with autism in the city school district. That’s around 6 percent of all the special education students in the 21,000-student district.

For some of those most profoundly affected by the disorder, there are special classrooms at the Beard School on Kennedy Street in Syracuse. The classrooms have blue cloth over the fluorescent lights to avoid harshness and flickering that can be distracting to students on the spectrum.

There are pictures with words to remind students of the day’s schedule and specific tasks. These visual supports once came in binders and were clipped out and photocopied, Schubert says. Today, they are on computers and tablets, devices that many students on the spectrum are quick to adopt.

“A lot of our kids get preoccupied with the technology,” she says. “You have to manage it well.”

Technology has allowed many children with autism spectrum disorder to express things that previously they could only communicate with great difficulty. Parents or teachers once had to guess what was aggravating a child or go through a list of possible irritants. Now a tap on a screen can allow a child to answer right away.

The ability to express themselves has given those with ASD a greater range of ways to express their intelligence. Ginger Ott’s oldest son has graduated from high school and has a job working with computers. Her middle son, who has also graduated, spends much of his day on the computer at home. Her youngest, 14-year-old Walter, has an Xbox, a Nintendo 2DS and, like his brothers, enjoys computers. “Everything is electronic,” Ott says.

“He is very bright,” she says of Walter. She says he has had a hard time learning in school, despite special programs and a one-on-one aide whom she texts regularly. “I love her dearly,” Ott says.

The Pierces found the special programs and accommodations for their sons in the Syracuse City School District were not quite enough for Ethan to keep up with the other children his age. While Ethan rarely speaks to anyone outside his family and seldom engages in social interaction, his father says, “He can produce grade-level work. Not what A-level students are doing, but grade-level.”

However, last year Ethan fell behind and the only way for him to catch up was for Jeremy Pierce, who teaches philosophy at Le Moyne College and Onondaga Community College, to homeschool his oldest son during the summer. “I’d have to basically stand over him,” Jeremy Pierce says. “This year, his teacher says he is doing much better.”

Families often have to make changes when they have a child diagnosed with autism spectrum disorder. The Bruces sold their boat to pay for home therapy for Caden. The Pierces find they are always thinking and planning around their sons’ needs, particularly Isaiah, who is sensitive to crowds and some sights and sounds.

The younger Pierce children, who don’t always get along with their older brothers, nonetheless always think of them. At the store, they will suggest buying something because one of their brothers would like it, Samantha Pierce says.

Ott, who doesn’t work outside the home, can’t count the times outings have been cancelled at the last moment because Walter became upset. And, she says, she turned down jury duty because she has to be home in case Walter is sick or acts out at school and is sent home. “I have to be here in case there are issues,” she says.

Melanie Bruce’s family doesn’t go out to eat. Caden, she fears, would be too disruptive to others in a restaurant. When Cael celebrated his eighth birthday with a party at the Rosamond Gifford Zoo, Caden stayed home so she could focus on her older child and his party guests. “This affects every component of our life,” she says.

Like Ethan Pierce, Walter Ott wants to go to college. And there are programs for students with autism who meet the academic requirements.

The Disability Support Services Office at the State University of New York at Oswego aims to help students on the spectrum, among others, achieve success at college. At colleges across the country, disability support offices provide a range of help.

Starr Wheeler, director at Oswego’s disability support office, says students can be provided with special places to take tests and assistance with other issues, such as receiving financial aid, navigating the dining hall and even getting a bus route changed. Other accommodations can include allowing students to take as few as three classes a semester while still living on campus as full-time students.

At the college level, students identify themselves as needing services and, through the office of disability services, get letters they use to inform professors of whatever accommodations they may need — for instance, bringing a service animal to class to help reduce their anxiety, Wheeler and Devendorf say.

The two suggest that aspiring college students and their parents visit the disability support office of whatever school they are considering, noting that different schools provide different levels of service. At Oswego, they invite all 353 students who have self-identified as having a disability to stop by whenever they have an issue. “Come and find us,” says Wheeler.

That attitude is important to Samantha Pierce, who says more than anything, she wants people to recognize the humanity of each of her children. “I don’t want him to feel less than because it takes him two hours to do work others do in 40 minutes,” she says.

A Full Plate: A professional baker mixes running a business with raising kids
Front Row Players creates space for adult performers of all abilities
To Top