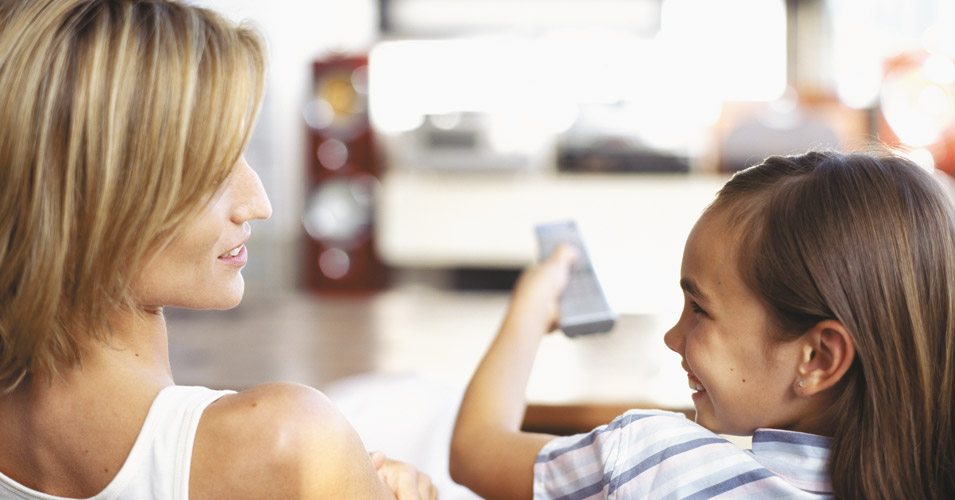 Em and I have been spending a lot more time together lately. Gone are the petty arguments, sneering tone, defensiveness and other emotional land mines I used to step on whenever I tried talking to my college-age daughter.

These days when she gets home from work or school, instead of stomping off to her room, Em seeks me out. And instead of ducking my head to avoid her glare, I meet her eyes.

Today she’s smiling. “Hey, Mom? Got time for an episode?”

I smile back, close my laptop and turn on the TV.

As Em would say, “Don’t throw shade.” And you may . . . now that you realize our together time involves binge watching. It’s the new family game night, and as my kids grow older, I’ll take what I can get.

The cease fire began when we bought a Roku—a big improvement over the 10-year-old Wii gaming console that had been connected to our ancient, clunky standard-definition tube television for years. Although we were early subscribers to Netflix, we only got our first HD flat screen TV last Christmas.

Between the old TV’s fuzzy images and the Wii’s limited bandwidth, watching streaming video was like seeing a movie on a drive-in theater screen. Novelty, mostly, with little quality.

So when friends raved about Netflix’s latest 13-episode drop of this season’s must-see show, I shrugged. What is this binge watching you speak of? Why do you sacrifice precious hours to the glass-boxed god?

I couldn’t get my head around the hysteria. It’s TV. So what?

It’s easy to be smug when you don’t know what you’re missing.

Then my husband hooked up the Roku. The picture quality was epic, the channel selection endless. Damn, I thought. I’ve been riding the bus all these years when I could have been cruising in a stretch limo.

It’s not as if we hadn’t binge watched before. But if you recall the world before Netflix, networks were miserly, releasing just one episode a week, stringing viewers along for months and even years. In order to watch your favorite shows nonstop, you had to wait for TV marathons or buy DVDs.

This ancient practice led to many a quaint family ritual. In my home, Syfy’s annual Twilight Zone marathon has played in the background of every New Year’s celebration. Holidays have always been the season of binge watching; there would be a DVD boxed set of our favorite series under the tree and we’d start watching immediately so we could finish before vacation ended.

My first serious case of binge watching was Gilmore Girls with my middle school daughters. Jaye liked Dean, Em preferred Jess, and I gained insight into the young women they were fast becoming. Those TV crushes accurately predicted whom they would choose in later years: the good guy or the bad boy.

As she got older, Jaye caught up with Friends after school, clicking from channel to channel for her three-hour daily dose of Ross and Rachel, Monica and Chandler. In her junior and senior years, it was Sex and the City. I’d briefly perch on the couch to witness Carrie Bradshaw’s disastrous love life unfold between commercial breaks, then overhear the rest as I cooked dinner.

Em became my steady binge companion because she let me choose the shows: the entire boxed set of Twin Peaks, then each season of Lost, purchased as soon as it was released on DVD.

Watching together was an activity I knew would get my daughters to open up: first about the characters and storylines, then about their own lives and concerns. As long as I avoided passing judgment and let them know any topic was up for grabs, we talked. And talked. And stayed connected.

By the time Netflix launched its first original series, Mom as binge buddy wasn’t OK anymore. My husband took the girls’ place and we ran through House of Cards, Orange is the New Black and Breaking Bad. Talk about peer pressure. Cocktail party chat revolved around “What are you watching?” We’d get pitying looks if we weren’t up on the right shows.

One friend, obsessed with Mad Men, pushed for over two years, repeatedly offering to loan us every season on DVD. We finally caved and binged on 65 episodes in six months, catching up with the series in real time.

So I got it when we connected the Roku and Em saw HBO Now was available. It was like winning the binge watching lottery. “Now I can see Game of Thrones!” she screamed. After years of missing out on her generation’s biggest pop culture event and the endless Winter is coming references, Em finally got GoT game.

We watched the first season together, and she’s halfway through the second. But when I asked why she’d gone ahead without me, she was honest. “It’s rough stuff, Mom. I’m not sure I want to see it with you.”

A safer bet is Stranger Things, which I watched on my iPhone before Roku and want to see again on a big screen. Although it’s complicated, dark and scary, underneath it’s a sweet story about middle school kids trying to save a missing friend. It’s chock-full of relevant topics that are suitable for parent-child discussions on loyalty, bullying, death and friendship.

What we choose to view with our kids is a highly personal decision. When I told a good friend I made a point of watching TV with my daughters, especially reality TV and the true-life teen shows on MTV, she winced. “I don’t like them seeing that stuff. I make them turn it off when I’m around.”

And when you’re not around they’re watching it anyway, I wanted to say. So shouldn’t you be there to put it in context for them?

Bad TV can lead to good conversations about uncomfortable topics. You can frame discussions around someone else’s behavior without placing blame, and communicate values and beliefs. But when you turn it off and turn away, you’re basically saying you don’t want to be exposed to these issues. And if your child happens to struggle with them, you’ve closed the door on his or her coming to you with those problems.

Watching TV together can keep the lines of communication open at every age and stage. For the cost of a Roku and a subscription to HBO Now, I’m getting guaranteed time with my adult child. That’s a pretty good deal.

Today, like every other day, I put my work aside and tell Em, “Yes, let’s watch an episode.” There’s nothing in my life that can’t wait. This has become a priority. Foolish? Not really.

I understand that the underlying question has nothing to do with television. Even though she’s practically grown up, what my daughter really wants to know is, “Mom, do you still have time for me?”

Ready, Set, Kindergarten! Attention to a few details can ease the transition
Thinking About Eating: A mindful family meal has many benefits
To Top