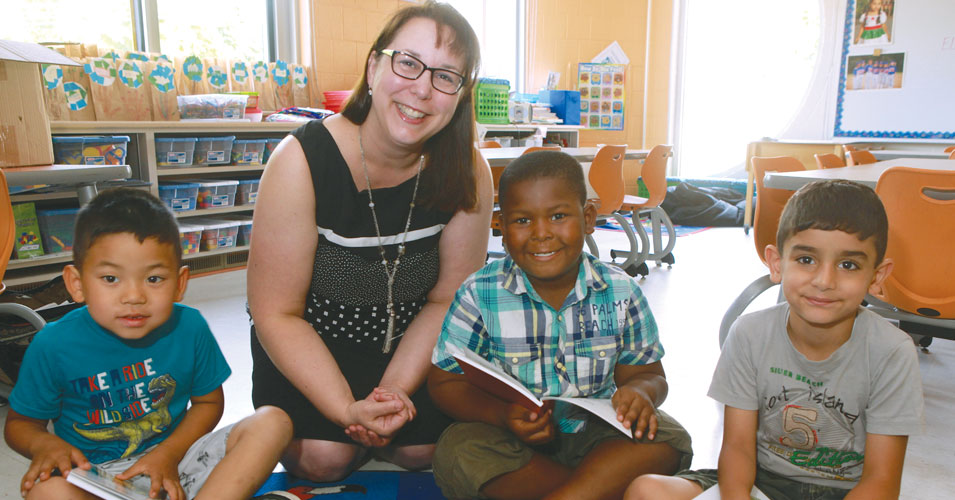 When Carin Reeve-Larham accepted the job as principal at Dr. Weeks Elementary School in Syracuse, it wasn’t just a challenging career move. It was personal.

“I lived in this neighborhood when I younger,” explained Reeve-Larham, 47, during a recent visit to the school, which serves over 800 students on the North Side of Syracuse, many of whom are immigrants grappling with extreme poverty. “I personally feel connected to this school. I knew what this school meant to the people who live here, and I feel like I understand how we got here.”

Dr. Weeks is one of 17 schools in the Syracuse City School District designated as struggling by a July 2015 New York State Education Department report. As a result of the report (and a New York state law implemented in June 2015), Dr. Weeks had two years to show progress with then-district superintendent Sharon Contreras overseeing the process. The school entered a period of receivership, or “tough love,” so to speak.

“Turnaround status, in terms of the state, means that we had been in significant decline in our student achievement for a long period of time,” said Reeve-Larham, who was appointed principal in 2014. “First, we had been a ‘focus’ school because our scores had gone down; then a ‘priority’ school because our scores had gone down even further.  Then, the classification of ‘turnaround’ was given to us.”

Since then, Reeve-Larham has been undeterred in her efforts to get parents and the greater community to believe that their school could be great. “No parent wants to hear that their child’s school is failing,” she said bluntly. “The negative language that was in the press about Dr. Weeks was hard for parents to hear. But it also was a motivator for us; you want to be viewed as ‘not failing’ really, really quickly.”

It wasn’t easy. Reeve-Larham—who began her career as a music teacher and later worked at Dr. Weeks as an administrative intern—had to sell new hires on the idea of working harder at a school that faced possible closure. That meant not just an extended school day but also a commitment to data-based support and training in collaborative team planning.

“(Embracing this) was really one of the criteria of working here,” Reeve-Larham said, detailing the expectations for Dr. Weeks’ 75 teachers and support staff. “This is working to turn around a school. And it takes some different competencies on the part of teachers. It’s what I’d call a relentless commitment, and it really has to come from everybody. The pressure is constant. It’s tiring and frustrating. You really have to give of yourself. But we’ve built a great team here.”

Initially, that team had little time to orient themselves to their new surroundings. Few knew the extent of the problems their students’ families faced each day and how those problems could manifest in student behavior.

“For us, year one was all about culture and climate. There were issues of safety that were concerning,” Reeve-Larham said. “There were a lot of suspensions and a culture that was not really conducive to learning. As a turnaround principal, you are really charged with setting a vision, establishing some clear priorities, and seeing some significant growth pretty quickly.”

The staff worked hard to build student pride, which Reeve-Larham saw as a gateway toward establishing a learning community based on trust. They established schoolwide routines and customs.

“We were creating a sense of pride around being a Wildcat (the school’s mascot), and identifying what that means,” Reeve-Larham said. “It’s one thing to be a Wildcat when you’re walking in the hall. It’s another thing when you’re in the classroom. . . . For us, that focused on being a good reader. We embedded that into our whole process of creating a culture and climate that was conducive to student learning. We really focused on building the capacities within our staff, within our students and within our families to embrace the fact that this was different. The expectations were different. It was about getting students to really buy into academic expectations and goal-setting; getting parents to really support the changes that we were making in terms of restorative practices and supporting the code of conduct.”

By the end of the 2015-16 school year, there were clear indicators that Dr. Weeks was making progress. Reeve-Larham set high goals for grade-level achievement in reading and math, and many were achieved. The hardworking staff not only stayed but has flourished and is making inroads toward building strong relationships with the community they serve. Suspensions have been significantly decreased since the 2013-14 school year, and summer school enrollment was up. 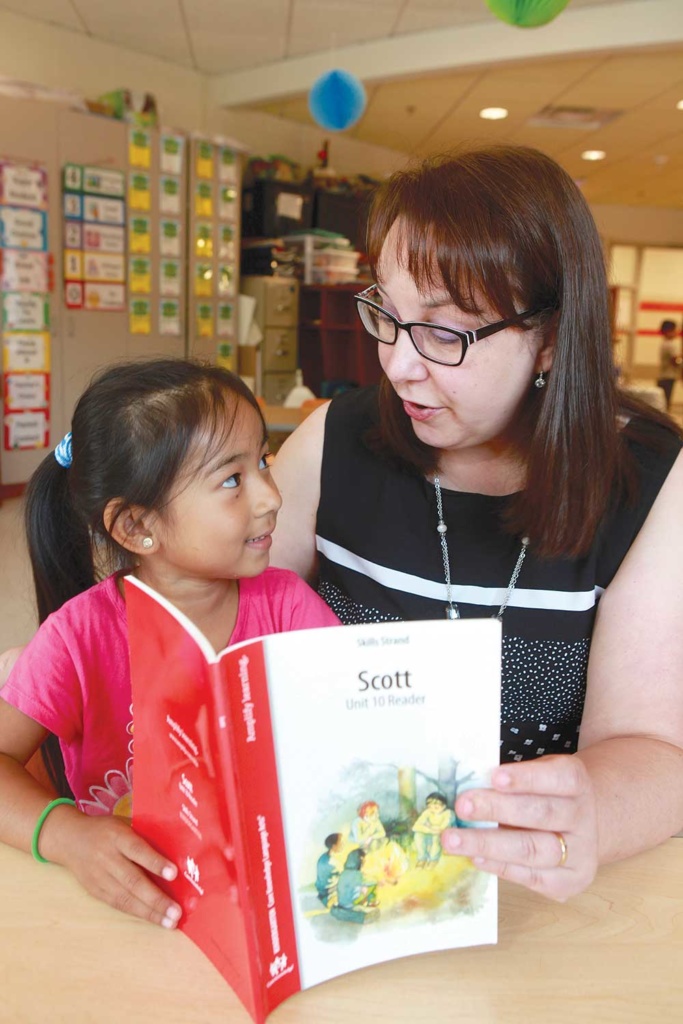 “Now, there is a culture of reading here, and students know where they are going,” Reeve-Larham said. “I feel really good about how we ended the year. We know from looking at our data that our students have improved. We know this is a different place than it was two years ago.”

The school will move into the next phases of the turnaround plan in September—putting even more emphasis on improving academics. There is also excitement about a new vice principal; Ski-Yaun Ware has joined the Dr. Weeks team, coming from Frazer School.

Reeve-Larham is optimistic about the possibilities, but she and her staff are also more acutely aware of the many factors that contribute to—or undermine—student success. No assessment can account for basic needs that cannot be met at school. So in whatever ways they can, they attempt to address those.

“There are just a lot of stressors on these families,” Reeve-Larham said, describing parents who juggle multiple jobs, new immigrants who struggle to learn the language and culture, and families dealing with serious health issues exacerbated by poverty. “You have to meet families where they are. The hardest thing about this job is knowing that people are struggling, but not having the answers. You don’t want to say to a family, ‘We can’t help you.’”

So, the effort to strengthen the school’s commitment to the surrounding community will be even stronger this year. The school is looking to partner with mental health, eye and dental care providers in order to expand services to its families.

Fittingly, organization and transparency are key aspects of her leadership style. During a recent visit to her office, large lists of goals and achievements for each month of the school year were posted on her walls. She eagerly shares data on her students’ reading and math goals and achievements that she compiled and documented all last year. She studies demographics and subgroups within each grade level to see how teachers can fine-tune their teaching strategies. And she posts to a blog, Keep Calm and #Turnaround!, as a way to share her progress with her school and instructional leadership teams, and with the public.

Reeve-Larham’s personality and work ethic enable her to sustain the focus necessary to lead a turnaround school. “Every moment has to be all-in, for me. It’s kind of like Dr. Weeks is part of my family,” she said.

Being “all-in” means helping others reach their potential. Reeve-Larham places a strong emphasis on teacher development and takes an active role in challenging and supporting the staff. She also stays on site as much as possible during the month of September, to help get teachers off on the right foot.

“Making sure everyone has a good, solid toolbox to help address issues is really important,” she said. “You have to get the expectations, and the routine, right in September. Consistency is important.”

Since Dr. Weeks has a shorter summer break than other local schools, downtime is treasured, and Reeve Larham is sustained by the support of her family—husband Tallon and sons Jacob, 14 and Sam, 17.

“The longer I’ve been there, the better I’m getting at being purposeful about my time,” she says. “You know, you miss things. But having everyone at home believe that this is the right thing for me to do means a lot.”

As Dr. Weeks School prepares for another busy fall, the SCSD remains in a period of uncertainty. Contreras recently started a new position as superintendent of Guilford County Schools in North Carolina, and the Board of Education Commissioners has embarked on a nationwide search for her replacement. Reeve-Larham is not concerned about the transition, reassured by the support she has from other administrative leaders at the district level.

“They really do trust in the vision we have for Dr. Weeks,” Reeve-Larham said. “There is lots of transparency, and I’m pretty confident that whoever comes in as a leader here will support what we are doing.”

Pages on Pregnancy: Books can offer information, and even some humor
What’s ‘Restorative Justice’? Syracuse schools try a new way to achieve peace in the classroom
To Top