Eric was raised Roman Catholic. Jason grew up Pentecostal Christian. But their homosexuality doesn’t deter their relationship with God — or their son.

On a warmish late-April evening, Jason Galvez was home with his 5-year-old son, Luke, when a car pulled into his Manlius driveway. He’d promised his niece he and his husband, Eric, would watch her toddler for a few hours. “Take your time,” Jason said as the young woman handed over Ryan and a bulging diaper bag.

Luke was sprawled in front of the television with a snack, and Ryan started inspecting the toys on the floor. Jason’s cell phone rang; it was Eric, saying he’d be home soon from work. “Don’t be long,” Jason said. “Love you,” he added as he hung up the phone and grabbed Ryan just before he banged his head on the coffee table.

Luke dumped a bin of toys and squealed when his cousin reached for a plastic airplane. “Share,” Jason told him. Within moments, Luke had arranged the cars, trucks and pieces of track into a crooked row he declared a pile of snow. Then he turned the toy bin on its side and called it a snow blower. “You’re on the snow!” he shrieked at Ryan.

About 20 minutes later, Eric arrived, walking through a door under a sign that reads, “Live Well. Laugh Often. Love Much.” He tossed his bag in the dining room as Luke ran to greet him. Eric kissed his husband, surveyed the pile of toys, then headed to the kitchen for a quick dinner.

Just another night in the Galvez household.

Jason and Eric met online in 2002. Jason wasn’t sure he wanted to meet in person, but Eric kept pushing for a date. They finally met for a cup of coffee at a New Jersey Dunkin’ Donuts. Their first date turned into an overnight gab session, in which they discovered that both dreamed of being parents and both considered their Christian faith important.

The couple married on November 14, 2009 — exactly seven years after they met. Eric, 37, is Filipino and was brought up Roman Catholic. Jason, 42, graduated from Fowler High School and grew up in a Pentecostal Christian family. He’s been in the military, worked as a teacher and performed as a singer and actor.

Eric, a lawyer, works at Barclay Damon’s Syracuse office. Jason is a stay-at-home dad, shuttling Luke to pre-K, play dates, the Y and horseback-riding lessons. Their schedules are hectic, and their hearts are full. There’s nothing especially unusual about an interracial, same-sex, Christian couple raising an adopted son, they say.

Luke is still too young for the birds and the bees talk, but they feel no need to make a big issue about either adoption or gay marriage with their son. “If it’s just a part of your family life, there’s no reason to have this big sit-down about it,” said Jason, who’s called Papa. “From a spiritual perspective, we’re all adopted. It’s not a big deal. We just have a loving family.”

Luke has never asked why he has two dads while other kids have a mom and a dad. For now, he’s perfectly content with their attention and unconditional love, they said.

The family attends Good Shepherd Lutheran Church in Manlius. The congregation belongs to the Evangelical Lutheran Church in America, which ordains LGBT clergy and welcomes LGBT people “to participate fully in the life” of the church.

That welcome differs from what they experienced in their churches of origin. According to the catechism of the Roman Catholic Church, homosexual acts are “intrinsically disordered” and “contrary to the natural law.” Protestant churches hold a variety of views of homosexuality; Jason describes his as “the ‘you’re going to burn in hell for being gay’” type of church. 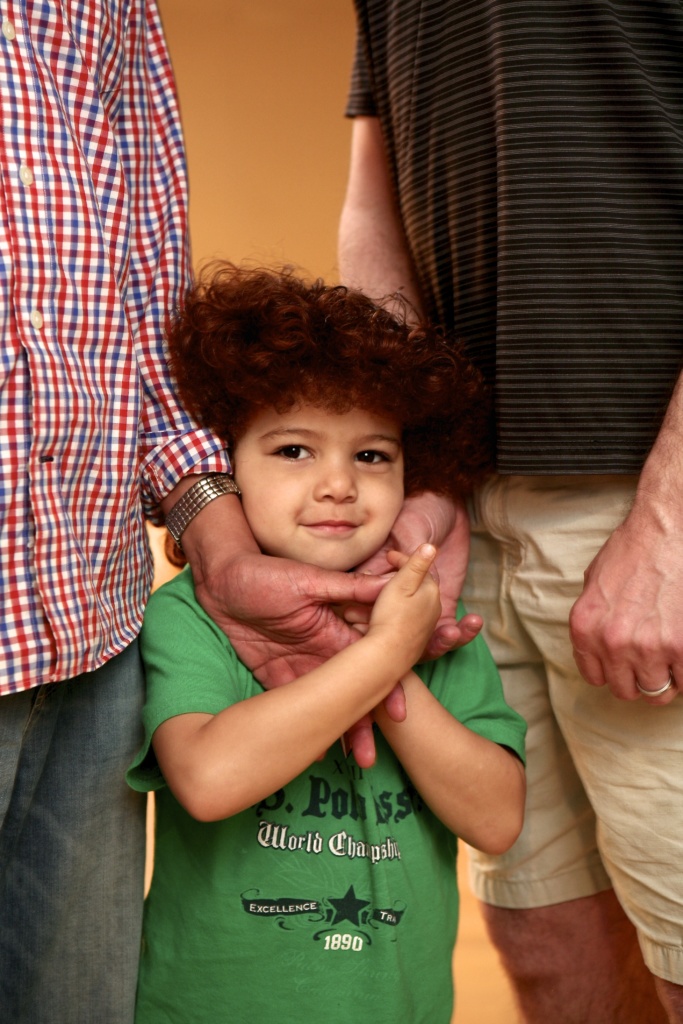 Jason, who serves as secretary for CNY Pride, a gay advocacy group, sometimes gets hateful comments on his blog, where he writes about his faith and his family. He resists the temptation to take on the haters.

“If (gay rights activist) Harvey Milk can take a bullet to his head, I can respond to a few nasty emails,” he said.

The couple said they’ve received nothing but welcome from their neighborhood, where they’ve lived since 2012. They recently attended an event at Enders Road Elementary School, where Luke will start kindergarten in the fall. When Jason asked if other students had same-sex parents, the principal shrugged off his concerns. “She acted like it was no big deal,” he said.

Despite last year’s Supreme Court ruling making gay marriage legal nationwide, and rapidly growing acceptance of gay rights, the men know their son will likely face discrimination about his family at some point. They got a small taste of it at this year’s St. Patrick’s Parade, the first time CNY Pride members marched in the Syracuse event.

When one man shouted at the group and called the participants names, Jason was tempted to confront him. But he decided not to, choosing to keep the event positive for his son.

Jason and Eric were living in Washington, D.C., when Luke was born. They met his mother through a gay-friendly adoption agency. They went with her to her doctor’s appointments and were in the delivery room when Luke was born. Eric cut the umbilical cord.

“She gave us the gift of life,” Jason said.

They loved the city’s pace and cultural life. But they wanted to raise Luke in a more family-friendly community, so they moved to Central New York, where Jason grew up and many of his relatives live.

“There’s trade-offs, but ultimately it’s for Luke,” said Eric, who’s Daddy. “Luke is very loving and playful. His innocence is amazing. He likes to be helpful.” Luke is also skilled at playing his parents off each other to get what he wants, he added.

A perfect day, Eric said, involves hanging out with his son and husband, watching movies or playing. “We can tell knock-knock jokes for hours,” he said.

The couple is waiting to adopt a second child. They’re taking foster-to-adopt classes with Onondaga County and are working with a private agency “to cover all the bases.”

They’re ready whenever the call comes. Luke’s baby room awaits, while Luke has moved down the hall to a room with a big-boy bed. The couple has no preference on the baby’s race or gender.

“Parents do the best they can,” Jason said. “It’s trial and error. You just love them and keep them safe.”

Asked if he wants a brother or sister, Luke responded, “Both.” His dads looked at each other and laughed.

About 90 minutes after Eric got home, Luke and his cousin were getting cranky. Eric comforted Ryan, while Jason snuggled with Luke.

“Did I tell you what happened in school?” Jason asked his husband as the boys settled down. “His teacher asked all the kids to share a wish. Luke said his was ‘to always love Daddy and Papa.’”

Lessons in Living: Passing on what I learned from my dad
Getting Kids to Crack a Book: Summer reading programs abound in CNY
To Top