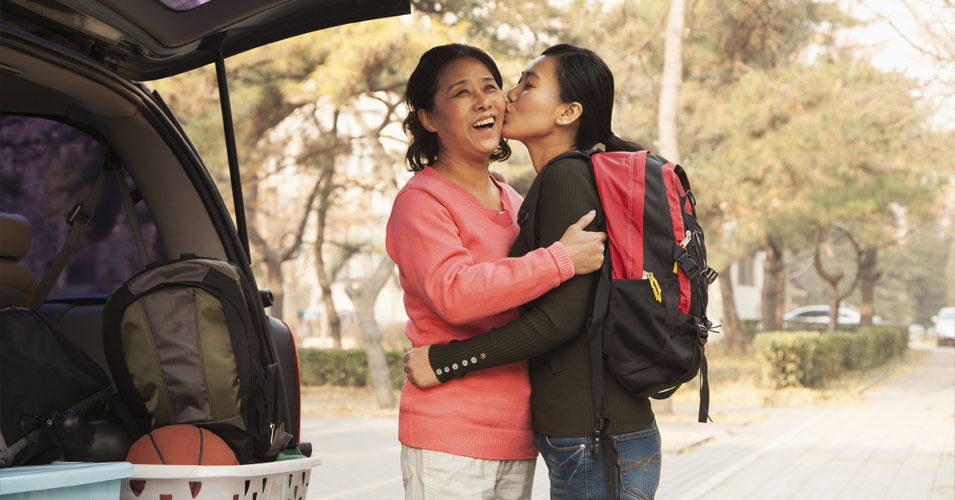 Just before my older daughter, Jaye, left for college, we established an accidental, unspoken ritual: falling asleep together while watching late-night TV, Jaye on the loveseat, me on the couch. Quiet companionship was something we hadn’t shared since she was a baby.

In the daytime, however, we fought about what she’d take to school in Chicago, how much money she’d need to live on, and all the tiny details that time, distance, and a 12-hour car ride amplify into major concerns.

When the big day came, our goodbyes happened quickly, the two of us at the corner of a busy intersection in the shadow of skyscrapers. Crowds streamed past us. Car horns blared. Exhaust fumes made my eyes water.

Jaye wrapped her arms around me, her lips brushing my ear. “Don’t worry, Mama. I’ll be OK.” I hugged her tighter than I’d ever held her, but the tug of her pulling away told me it was time. I let go, watched her run across the street as the light turned green. Dozens of cars closed the space between us.

Em—my younger daughter, my baby—realized she needed to drive a wedge between us in the week before she left for college so I wouldn’t mourn her absence. Her school was only an hour away, so there was less stress over her departure, but we fought more.

On freshman move-in day she drove her own car to school—a vehicle she’d bought three months earlier with money she’d earned from a part-time job. I followed, glued to her back bumper, not willing to let any cars get between us.

This goodbye was in a basement hallway as we waited for an elevator. She submitted to a crushing hug from me, stiffening when it went on a little too long. A chime sounded. Sliding doors opened. I got in, and she escaped down the hallway, not one for dramatic scenes. But when I walked into an empty, dark house an hour later, I stopped holding it together and wept.

Before I became pregnant, a co-worker 15 years older advised, “Don’t go for more than two children. Cars have left- and right-side windows. Most homes have three bedrooms. You only have two hands.”

Holidays bounce them back, Thanksgiving and Christmas have enough pull for their return. The first two years Jaye rode the train, but soon learned Amtrak was frequently delayed. By junior year she had a part-time retail job and decided to fly instead. I couldn’t blame her. Chicago-Syracuse airfares were as cheap as a train ticket. But there was a catch.

“Mom, I’m scheduled until 4 o’clock Christmas Eve. If I leave right from work, O’Hare’s only 90 minutes away, but I really shouldn’t book a flight earlier than 7:30. So I won’t get to Syracuse until 11 p.m. Is that OK? And I’ve only got two days home because I have to go back to work.”

No, that’s not OK, I wanted to say, but I’d take whatever time I could get.

Outside the exit doors of the terminal, I almost didn’t recognize my own daughter. She wore an ugly Christmas sweater, red skirt, green tights and a Santa hat with bangs peeking out.

When did you get your hair cut and highlighted? Why didn’t you tell me? Instead of complaining, I focused on her bubbly chatter. “It’s fun to travel Christmas Eve. We all sang holiday songs and everybody was in a good mood.”

At least Jaye let us in on her plans. Em decided at the last minute when she’d come home. I’d been bugging her for weeks: “Just tell me what time you’re leaving so I know when to expect you!” I hated the thought of her driving on dark roads covered in black ice. “Pay attention to the weather report. Leave while it’s still daylight.”

She was casual—read “inconsiderate”—about my feelings until a snowstorm turned her hour-long drive into two hours. After that, she gave me plenty of warning and made sure my cell phone was charged so she could reach me in an emergency. That Christmas I gave her an AAA membership, more than happy to pay for the peace of mind.

This year, one daughter has returned; Em’s back home, working a part-time job until she decides what to do with the next phase of her life. Jaye’s on the West Coast after a summer job turned into full-time work with the California Conservation Corps. She’ll be flying home for the holidays, staying two weeks, grateful for every moment with us. Me, too.

Whether it’s a holiday visit or a prolonged stay at home, I hold my daughters knowing our time together is short. Being a parent of young adults is nothing more than a catch-and-release game. To truly master it is to learn to let go.