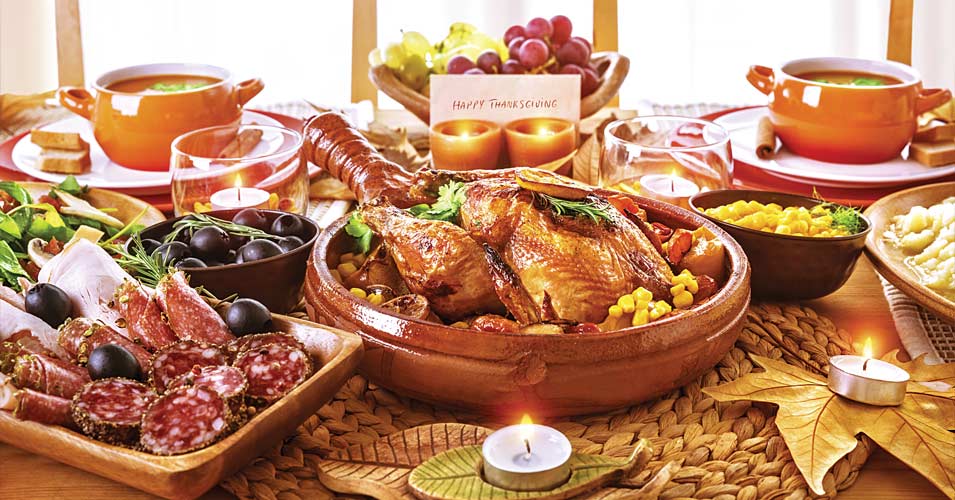 My childhood Thanksgiving memories are practically nonexistent. That’s because my parents and I dined with strangers in places I never saw again. There were only three of us, so we took the easy way out. The Sunday before, my father bought the newspaper and looked at restaurant ads. He made Thanksgiving dinner reservations based on impulse and price.

This was not—and never had been—a recipe for success. So when my boyfriend of three months invited me to his parents’ house for Thanksgiving, I had high hopes. I pictured a serene Norman Rockwell setting with poised dinner companions. Instead, I arrived at a home in cheerful chaos, filled to overflowing. Tables had been set up in nearly every room that didn’t have a toilet or a bed. I counted 27 chairs—nine times my usual number of Thanksgiving companions.

And then there was the decibel level. Kids ran around screaming. Men yelled at the football game. Women chattered as they attended to boiling pots on the stove and casseroles in the oven. My smile was fixed, my head splitting.

After the meal I went upstairs, but one floor wasn’t enough to muffle the noise below. This is what a typical Thanksgiving is like, I thought. This is what real families do. I’d gone from boring to boisterous in one meal. Yes, I was overwhelmed. Yes, I felt like Scrooge. But I also didn’t want to go back to dining with strangers. True, these people technically were strangers, yet I hoped this boyfriend and these relatives would become something more.

The following Thanksgiving, we were newlyweds. When I asked what I could bring to the meal, the answer was, “The relish tray.” That had been Jim’s bachelor-era contribution, but I secretly hoped to develop a signature dish just like my sisters-in-law had.

Jim’s four older siblings were all girls. Three lived nearby. Barbara was known for her homemade pies. Each year she made one apple and one pumpkin from scratch, down to the pumpkin filling. She also baked “cookies” for Dad—pieces of pie crust cut into shapes for my father-in-law, who couldn’t eat sugar but liked crackers and breads.

Connie made the antipasto: sliced meats, hardboiled eggs, tuna, Italian pickled vegetables and anchovies. Although it filled two large platters, we still scraped them clean when we reached for seconds.

Kathy made potatoes au gratin. Slender, athletic, the youngest of the girls, she always brought a rib-sticking heart-attack side dish yet somehow stayed fit.

Anne, the oldest, lived in California. Her mid-afternoon phone call signaled a pause in preparations as the phone was passed around.

Nothing, however, held pride of place quite like the escarole soup. Similar to Italian wedding soup, it was as essential to the dinner as turkey. For years Mom made the soup all by herself, mixing pounds of ground beef and pork, and rolling tiny meatballs that she browned in a pan before adding them to the soup. As her arthritis worsened, Dad helped out. The task eventually passed from family member to family member, depending on who had enough time to roll the meatballs.

As the first course of our traditional Thanksgiving meal, that escarole soup—and those tiny meatballs—set the tone for everything else.

Dad was (and still is) the one whose opinion matters most. “Look at the size of these! Too big!” he’d announce from the head of the table, holding his spoon aloft. “It’s the size of a grape! Who can eat that?”

The first time I tried to roll meatballs, my husband gently informed me that my golf-ball-sized lumps would get us disowned. “But they’ll cook down as they brown!” I insisted.

Over time, I understood that in its raw state, the
ideal meatball starts out no bigger than a grape. It has to be browned slowly to develop a crispy brown skin to withstand the rigors of the soup pot. The perfect cooked meatball is the size of a fat blueberry, which—if you’ve ever rolled a meatball—is very, very time consuming to produce.

One year Dad crowed over the work of Connie’s daughter Melissa. Home from college, she had helped make the soup. “You know what Melissa did? She rolled 327 meatballs!” Those perfect meatballs, and that mighty number, entered family lore as the soup to beat.

Oddly enough, there was no actual recipe for escarole soup. I learned this the year I worked on a local TV talk show and had to make the soup for our Thanksgiving episode. “Goodness, I don’t know!” Mom spluttered when I asked for ingredients and measurements. “I just add a little of this and a little of that.”

“You don’t have anything written down? The producers want a recipe we can put onscreen for the viewers.”

Eventually, with Connie’s help, we came up with a close approximation. Two ingredients surprised me: canned diced tomatoes and two raw eggs stirred into the soup right before serving. That’s why it never came out right, I thought. I’d tried to copy it using recipes I’d found online, but they always fell short.

I’m glad Mom wrote down her version. Two years ago this month she unexpectedly became ill and, after trying to hold on for the rest of us, she passed away two days before the holiday.

This Thanksgiving, just like every other, we plan on keeping our traditions going. Barb will make the pies and Dad’s cookies, Connie the antipasto, Kathy the potatoes. Jim and I have been married 27 years and I still don’t have a signature dish. But I’ve learned to make the perfect meatball, and if 328 of them are what’s required for a happy Thanksgiving this year, let’s roll.

Belles of the Ball: A mom gets out what she puts into Halloween costumes
Rebounding Adult Children: Kids leave, they come home, they leave again
To Top