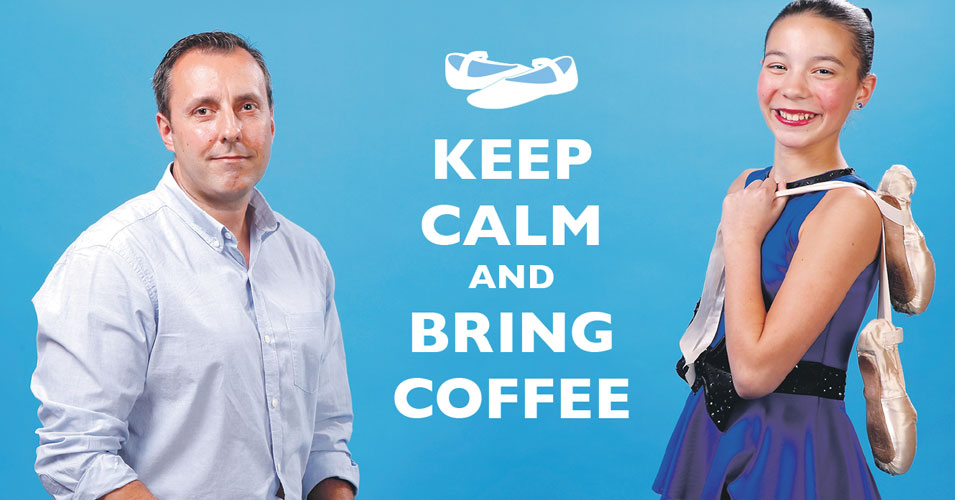 It’s a Saturday but I woke at 7 a.m. I arrive downtown with seconds to spare, holding a wig and a change of clothes. Armed with my camera and a cup of coffee, I find a seat in the dark and wonder when I might next see the sun.

Unfortunately, I am not a secret agent. I am the father of a 13-year-old dancer, and it is competition season. For the most part, this means that I belong to the community of proud parents who sacrifice countless evenings and dollars to encourage their child to excel at one activity or another.

In my case, I do it all in the name of someday witnessing the perfect arabesque or front aerial—or so I’m told. I’m not qualified to know what either of those would look like, but I’m assuming that they are the dance equivalent of a grand slam home run or a goal-scoring header off a corner kick from 10 yards out.

Competition season also means that most weekends from February to June, there is a good chance you can find me at the Mulroy Civic Center or in a local high school auditorium, rooting on my daughter while cultivating my appreciation for a skilled jazz or contemporary routine. I’m easy to spot. I’m the one in the back reading a book and asking why the music needs to be a few decibels shy of a jet engine.

The events often start Friday evening and don’t wrap up until late Sunday night. So by the end of just one weekend, I have usually suffered more show tunes and children’s songs than a 6-year-old with a season’s pass to the Magic Kingdom. The Frozen soundtrack plays on an unrelenting loop in my head.

I’m not asking for sympathy. Having done this for six years, I have grown to understand that these are cherished memories that can never be relived (except through the wonder of a $60 DVD of your child’s efforts, available for sale at the door). I consider myself a veteran with some valuable insights for any parent just getting started. If, in the last few months, you have found yourself griping,“That’s how much tap shoes cost? There’s not even a Nike logo!,” then read on. The true cost, you’ll soon realize, will be charged to your sanity.

At first glimpse, the dance world seems like a mascara-and-hair-extension-filled fantasy where perpetual smiles convey the joys of a carefree childhood. But after just one weekend, the truth becomes apparent: Dance competitions are a battle of will, sweat, blisters and frustration, where no accessory can be too sparkly, no bun pulled too tight. Picture the Hunger Games with less blood and more sequins.

The most seemingly basic elements can be difficult to grasp. For one thing, don’t try to figure out the scoring system. It involves irrational numbers, witchcraft and the same ill-conceived algorithm used to calculate the time required to defrost ground beef in the microwave.

Similarly, don’t try to interpret a dancer’s facial expressions during a performance, especially ballet. A ballerina’s face is meant to communicate the pain and anguish of walking on one’s toes. As I learned firsthand, it is not acceptable to ask if any of them are trying to pass a kidney stone.

I have seen the gamut of emotions, from sorrow to fear to rage—and that was just on costume-fitting day. I have seen mothers in tears, children in hysterics and fathers in the lobby watching basketball on their phones. I have seen a dancer step offstage to vomit into a garbage can, only to return three numbers later and deliver a flawless performance.

By the end of each competition, I am certain I have seen it all. And then, at the very next one, a hip-hop dancing lobster will accidentally fling a claw at the judges’ table. It’s those moments that make me question why I am sitting there, having eaten only popcorn all day and still winning no award for lowest blood sugar.

But then my daughter Sadie takes the stage, and it all makes sense. She looks beautiful and confident, and she has more dance talent than I ever would have imagined. Those two and a half minutes of her in the spotlight make the previous three hours of madness worth it. Somehow, that amazing girl up there is my child, and I wouldn’t trade the huge smile on her face for anything in the world—not even the chance to be a secret agent.