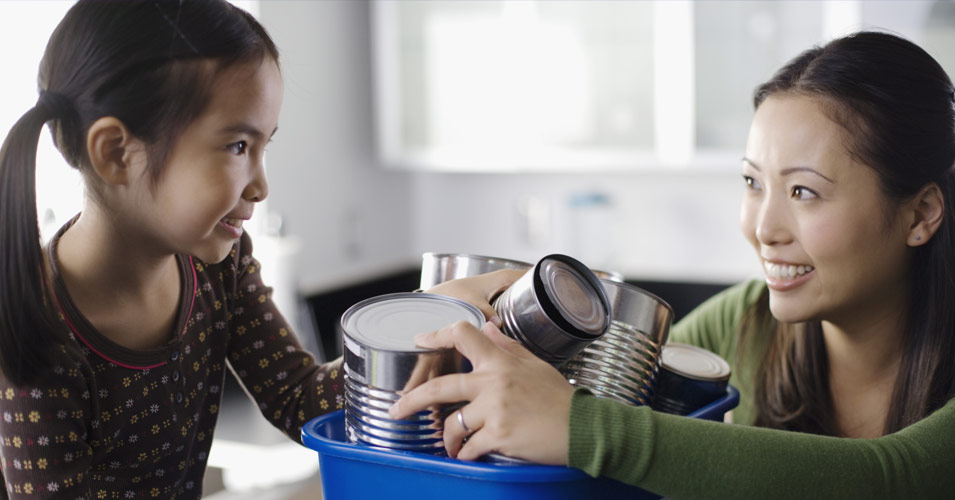 Earth Day, April 22, reminds us every year about the importance of the environment. Many parents are concerned about problems like climate change, habitat destruction and plastic pollution, but they worry that these topics are too scary for kids.

Nevertheless, tackling such topics gives you a chance to introduce scientific concepts and instill the importance of making responsible choices. By addressing environmental problems, we take a step toward raising thoughtful citizens of the planet. Here are some ideas for discussing these topics with kids.

Keep it simple. Most environmental problems are based in simple scientific facts. Food decomposes and becomes dirt; plastic does not. Metal and glass can be recycled continuously; plastic cannot. Our electricity often comes from burning either coal or natural gas. Getting coal and natural gas requires that we either destroy a mountain or blast water (and chemicals) underground. The smoke (carbon dioxide) that comes from burning coal, wood, natural gas, and gasoline traps heat in the atmosphere. (You can watch a simple experiment online with Bill Nye that shows the thermometer in a jar filled with carbon dioxide goes up faster than a thermometer in a jar filled with normal air.) Ice on the earth is melting because the earth is getting warmer.

You don’t need to plan a whole lecture on a given topic, just introduce your kids to some of these simple facts when the time is right.

Talk about your behaviors and choices. When is the time right? Andrea Buckvold, mom to Sadie, age 10, and Harry, 7, is able to find opportunities during their daily routine. “For example, while shopping at the grocery store, we were looking at the various fruits available in February, and pointing out where they were grown (all of them very far away).” When you ask your kids to turn off lights when they leave their rooms or put on socks instead of turning up the heat, remind them that making electricity often makes pollution.

Focus on the solution. One reason that I’m not afraid to talk with my kids about environmental problems is because I know there are potential solutions. Burlington, Vt., now generates enough electricity from renewable resources to power the whole city. Denmark will be totally freed from fossil fuel use by 2050. My kids got to see a car that plugs in up close when my mom decided to buy a Prius plug-in last year. Of course, I don’t have all the answers, but I want my kids to feel the optimism

expressed by the saying “When the going gets tough, the tough get going.”

Learn together. Your kids will ask questions you don’t have the answers for. Educate yourself and learn with them. The NASA website is a great resource for climate change questions. Andrea’s kids like to watch the Planet Earth documentary series and the Cosmos television series. My kids love Magic School Bus books—the original ones are as long as a chapter book!—which never fail to teach me something new.

Use local resources. The public libraries have many science books for kids that concentrate on explaining environmental problems. Some of you may remember that Bill Nye, the Science Guy, had his own TV show; those DVDs are also at the library. Magazines like National Geographic Kids and Ranger Rick encourage reading about the environment. A visit to the Rosamond Gifford Zoo helps introduce the topics of habitat loss and deforestation, which are mentioned on descriptive placards by the animals’ enclosures. The MOST has exhibits that address sea level rise and the Onondaga Lake cleanup project. The Sciencecenter in Ithaca—free if you’re a MOST member—is great for encouraging reuse, and the Museum of the Earth, also in Ithaca, excels at giving visitors a global perspective.

Repeat yourself. As with any other important topic, parents must get used to repeating themselves. You wouldn’t expect your kids to remember if you only told them one time to say “please” and “thank you.” Similarly, you repeat yourself with positive messages about love and values. You know you’ve said it enough when they start repeating it back to you. Sean Conrey, father of Mira and Emily, 8-year-old twins, remarks that his kids are not shy about pointing out “some hypocrisy we live with, as when they know that we could walk somewhere, but we drive.”

Still, many environmental problems are abstract and only make sense to kids over time. In writing this story, I asked my kids to tell me what some of the problems going on with the earth are. My 7-year-old son had a lot to say, while my 3-year-old daughter, eager to get in on the conversation, added, “uh . . .  vampires?”

Enjoy. To me the best part about sharing environmental knowledge with my kids is that we can bond over a common passion. The other day I was sitting on the couch reading an article in the Sierra Club magazine about offshore wind power. My son came up and asked that I read a bit to him. One picture was of a factory housing turbines bigger than airplanes; the turbine is the center part of the gigantic windmill, where the magnet is spun to generate electricity. After a bit of back and forth about the logistics, we both sat together, staring in awe. “Isn’t that cool?” I asked. “Yeah,” he agreed.

The Value of a Trust: Estate planning can protect children with special needs
Why Tests Fail: Standardized exams don’t help students
To Top