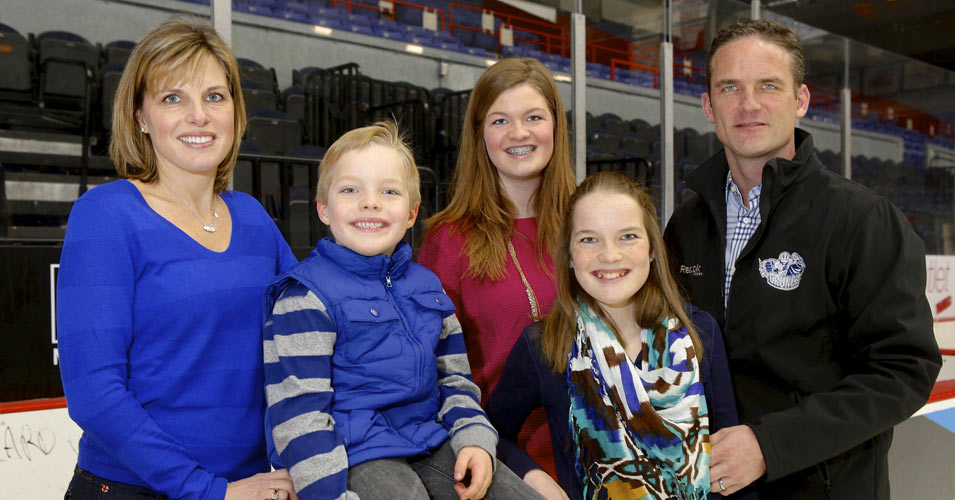 The cold and snow of Central New York are of little concern to Rob Zettler. After all, Zettler, coach of the Syracuse Crunch hockey team, hails from Sept-Îles, Quebec, and has had skates on his feet for most of his 45 years.

“It was pretty typical for the kids in our neighborhood to play a lot of hockey,” says Zettler. “Canadians see hockey as a game we can put our stamp on. My two brothers and I, we all played. Somebody was always organizing neighborhood games at nearby ponds in the winter—street hockey in the summer. The better players would also play in the city leagues.”

Zettler’s love for the game kept growing. He had a successful run at the junior level with the Sault Ste. Marie Greyhounds. By 1986, he made it to the National Hockey League, signing with the Minnesota North Stars. Zettler, a defenseman, enjoyed a 14-year run in the NHL, finishing his playing career with the Washington Capitals in 2002.

Despite hockey’s reputation as a punishing sport, Zettler jokes when asked about the injuries he sustained. “I didn’t have too many, luckily,” he says with a laugh. “I have a good surgeon and a good dentist.”

Coaching, Zettler says, was a logical next step. He was named an assistant coach with the San Jose Sharks just months after ending his playing career. He has also worked with the Toronto Maple Leafs, a team he played on from 1995 to 1998. Zettler was hired by the Tampa Bay Lightning—the parent organization of the Syracuse Crunch—in 2012. After one season as an assistant, Zettler was named head coach of the Crunch in March 2013.

While Quebec will always be home, Zettler’s career has taken him to various regions of the United States and Canada. One day, during his time with San Jose, Zettler went into a store to buy a shirt and tie, and met his future wife, Shannon—a California native. The couple have been married for more than 20 years, and Zettler considers her his most important teammate.

“When you are in this game, the best thing to have is an understanding spouse,” he says. “She wasn’t that familiar with hockey at first, but she became a fan of whatever team I was on. She attends Crunch games whenever she can.”

The couple have three children: Laney, 14, Emma, 12, and Robert, 6. All have adapted well to their Manlius community. “My kids have never known any other kind of life. They are used to having to pick up and move. But they really enjoy it here. They really like their schools.”

Zettler admits that juggling family life with coaching is a challenge during the playing season. “There’s really no downtime; we’re doing something every day. But I really try to get home for dinner on practice days.” The off season is all about family. The Zettlers head to California every summer to reconnect with Shannon’s family, recharge, and soak up some sun.

The move to Syracuse has helped Zettler’s career. He arrived last year during what was arguably one the most exciting hockey seasons in Crunch history; Zettler helped lead the team to division and conference championships. The team lost in the Calder Cup finals, but Zettler was impressed by the level of support fans showed. And the team is fired up to do even better this season.

“Syracuse is definitely a hockey town,” he says, adding that American fans are typically the more enthusiastic spectators, despite Canadians’ deep love for the sport. “Typically, there is a core group of very dedicated fans in every city, but there is definitely a passion for it here in Syracuse. There is a lot of enthusiasm behind the team, and the guys appreciate that.”

While the goals for the Crunch and other teams in the AHL are—primarily—to win and to develop players for the NHL teams, Zettler says he has enjoyed, and will continue to encourage, the relationship the team has with the Syracuse community. Crunch players are affiliated with everything from Toys for Tots and the Hillside Family of Agencies to Autism Speaks.

“Our guys are fantastic about giving their time,” says Zettler. “Most of these players are only here during the season. They come from all over the world. But the Crunch organization believes it’s important to support the community and give back.”

In his role as coach, Zettler believes he has an opportunity to give back to the game. As a player, he developed a strong sense of organization and structure, which has been an important element of his coaching style.

“At this level, the best part for me is the teaching part—seeing how that translates to the ice,” he says. “As a coach, every player is looking to you for answers. You can’t be like anyone else: You have to be straightforward with them.”

Zettler says his integration into the Crunch fold was made easier thanks to a great core of veteran players that exemplify team leadership, including forwards Eric Neilson
and Mike Angelidis, and defense-
man J.P. Cote, who was called up to the NHL’s Tampa Bay Lightning in December. “Things go a lot smoother with good team leadership,” Zettler says. “That helps the younger players evolve, and that’s been a key to our success.”

As a parent, Zettler has become increasingly interested in local youth athletic programs. His son recently started playing hockey with the Valley Youth Hockey program at Meachem Ice Rink in Syracuse, and Zettler has been struck by the level of commitment and enthusiasm from the program’s volunteer coaches. “There’s no pressure on the kids and there is great support,” he says. “I think the measure of a good program is: Do the kids want to keep playing? That’s the take-away.”

No matter what sport a child is into, Zettler advises parents to resist the urge to push. He has seen enough natural athletes to know that the motivation to succeed comes from within.

“If the kid doesn’t have a passion for it, they will not succeed,” he says. “If they do, they will want to work hard, and they will have fun.”

A Special Olympics Challenge: Sports spectators can try on new thinking at the local event
Addressing Teen Dating Violence: Parents can help sons and daughters in unhealthy relationships
To Top