Ever since a friend’s family went to Ottawa to skate on the canal one winter, I’ve wanted to go. This is the year. Real outdoor skating, ice sculptures, museums, toboggan hills, hot chocolate and yummy pastry beaver tails; This is how Canadians embrace snowfall. They celebrate it.

That’s easier to do when you return to a warm room, and the hot tub and pool are located in the same hotel. Two friends had recommended the Brookstreet Spa Hotel, which features salt water pools – even a separate kiddie pool – and a full-service spa, just three hours from the Syracuse area. Considering the exchange rate, all Canadian prices are about 25% lower in U.S. dollars, so our $149 hotel room came in at $111 U.S. per night. That’s a good deal. A drawback was the 30-minute ride to Ottawa on a nearby highway and having to pay for parking. If you aren’t staying at one of the downtown Ottawa hotels, like the Marriott, I recommend using the underground parking lot at the Rideau Centre shopping mall. Street parking was 25 cents for five minutes, and Ottawa is an easily walkable city, even in the snowy cold.

Ottawa is the place to see a National Hockey League game, according to one New Hampshire family I met in the hot tub at my spa hotel while doing “research” for this story. Although ticket prices in Boston were “out of their league,” ticket prices for the Ottawa Senators are comparable to Crunch hockey games in Syracuse. To watch the NHL stars, a family pack of four tickets costs $23 Canadian dollars per person with no additional fees for a Tuesday or Thursday night game (and even a few Saturday games in winter 2020). We met at the Brookstreet Spa Hotel, which offers a school bus ride to the game.

Many other options await your visit. Christmas lights will shine downtown and as part of a multi-media show outside the capital’s Parliament buildings through Jan. 7 during the Christmas Lights Across Canada program. 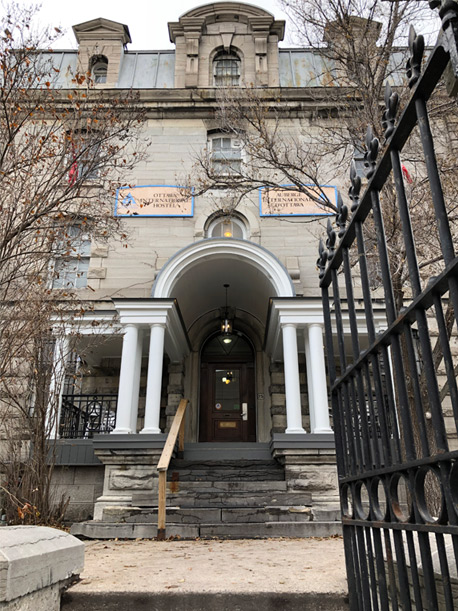 The old Ottawa Jail is now an international hostel. Photo by Eileen Gilligan 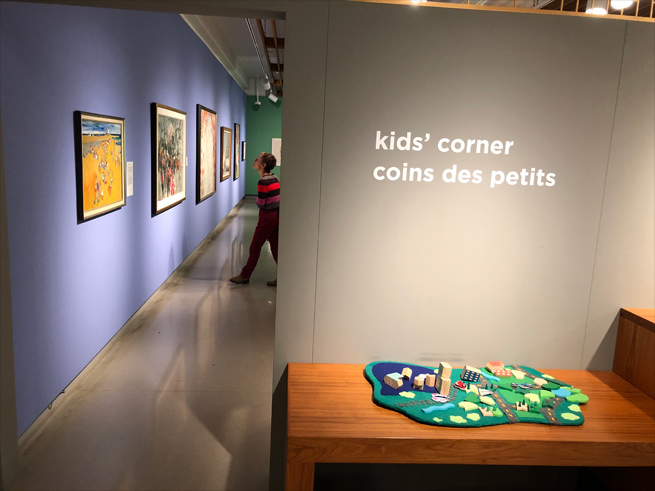 The children’s area at the Ottawa Art Gallery. Photo by Eileen Gilligan

The center of the city offers the ByWard Market, indoor and outdoor shops featuring everything from handmade crafts to a variety of food shops, restaurants and coffee bars. We headed straight to Le Moulin de Provence bakery for a sugar infusion to start the day, and were greeted by “Obama cookies.” What might look like a Canadian maple leaf sugar cookie to the uninitiated are named “Obama cookies” in honor of the former president’s visit there in 2009.

We walked toward the National Gallery, a huge, modern building hosting Indigenous and Canadian art. Greeting passersby is Maman, a 30-foot bronze sculpture of a mother spider. Created by the late French-American artist Louise Bourgeois, the spider holds 32 marble eggs in a sac beneath its belly. Make sure to take a look at night, too; new lights were added to Maman in October.

Across from that museum is the free Ottawa Art Gallery, which offers five floors of smaller exhibits of Canadian artists with some tables and walls designed for children’s play. Check the listings for children’s play time, adult happy hours and free day care. We took in three exhibits and the gift shop before heading next door to the Old Ottawa Jail. Now an international hostel, the top floor is open for a tour, if you dare. This was to be the lodging for the next night of the New Hampshire family’s visit to Ottawa. Their 11-year-old twins were in for an adventure at the allegedly haunted 150-plus-year-old jail.

Another short walk led to the Victorian-era Parliament buildings, which sit on a hill overlooking the Ottawa River and the city of nearly 1 million people, although it seems smaller and more like Syracuse to me. Free tours are available of the House of Commons and the Senate. Nearby Rideau Hall features a free tour of the governor’s residence. One of several in the city, an outdoor skating rink is also on the grounds, if you prefer that to the natural ice of the canal.

Seven of Canada’s nine national museums are in Ottawa, including the National History Museum. You can also check out the Royal Canadian Mint and the Bank of Canada Museum, which has interactive exhibits about the economy.

But enough about museums! It’s time to venture to the Rideau Canal, which becomes a nearly 5-mile-long outdoor skating rink from early December to March each year. You can bring your own skates or rent there, and the Rideau is free and open to skaters all day and night. Extra hats and mittens can be found on sale there, along with hot chocolate and warm beaver tails (what we might call a cousin of fried dough with cinnamon sugar here in the states). Especially during the three weekends of the annual Winterlude festival, non-skaters can enjoy the ice sculptures and playground made of snow. For more information on the festival, visit ottawatourism.ca/events/winterlude.

We’re going back for a Winterlude weekend in February and bringing ice skates, extra warm clothes and thick mittens. Another family may join us because they’ve only been there twice. They need one more visit to see it all, the dad says. When we get too cold outside, I hope to duck inside the Hotel Fairmount Château Lautrier for high tea. After all, winter can be celebrated indoors, too. 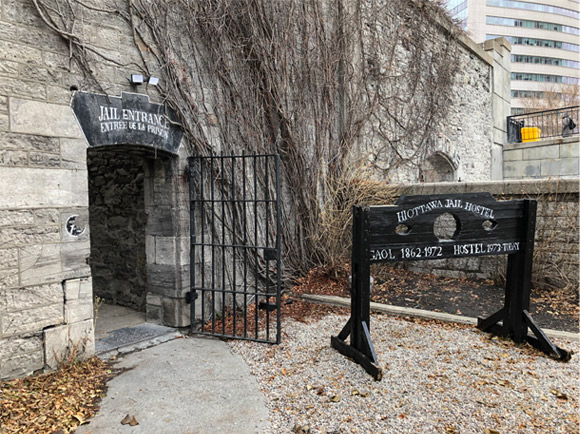 Entrance to the Old Ottawa Jail. Photo by Eileen Gilligan 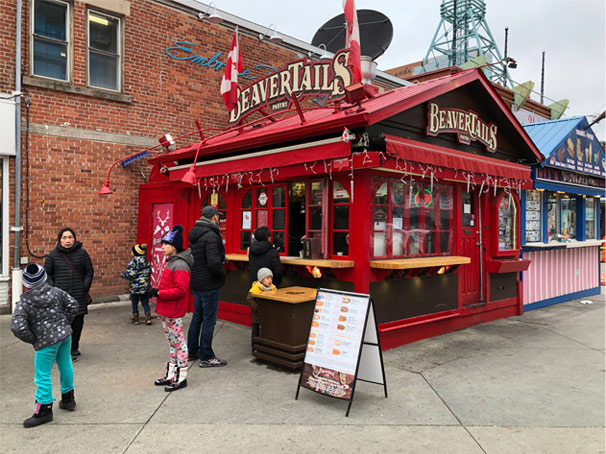 A beaver trail shop in Ottawa. Photo by Eileen Gilligan

Tips for traveling to Canada

Cellphone: Download and/or print out directions, or pick up a map, before heading into Canada. Turns out my new cellphone service did not reach beyond an hour into Canada. Although we downloaded directions using Wi-Fi before heading home, when I made a wrong turn, the phone froze trying to reroute without data service. Members of AAA can pick up a free map at a local office. Remember, AAA membership extends through Canada as well – just in case.

Gasoline: Of course, they use the same gasoline across the border, but it costs more there. Try to fill up before heading into Canada and after crossing back into the U.S. to save a few dollars or more on gas. While the average price around Syracuse was $2.50 a gallon during our trip, the average price in Ottawa was $1.16 Canadian and that’s for one liter. Four liters make up a gallon. Even without doing any more math, our kids should know that’s not a good deal for New Yorkers.

Money: Using Canadian dollars and coins will help you save money – once you get them. I like using foreign currency with children because I think it reinforces the idea that we’re in another country. An ATM withdrawal in Ottawa cost me a $5 service charge from my home bank after the ATM’s fee. When I used a credit card, I chose the option to pay in U.S. dollars to avoid a foreign service transaction fee with each purchase. The exchange rate for U.S. dollars to Canadian is so good right now (25% in our favor) that even a few cents less via the credit card transaction is better than another foreign transaction fee. Some businesses will accept U.S. currency, but they treat it as Canadian, so you lose 25% of the U.S. value. Local banks and credit unions may get you Canadian currency, but they often charge a fee for that service.

Language: Of course, everyone speaks English in Ottawa, but many also speak French. I enjoy being greeted with “bonjour!” at times, and it’s another chance to practice my French and remind children of other cultures, especially ones so close to home.

Treat Yourself: Ice skating in Clinton Square is an affordable night out
May Family Guide: Cure cabin fever with a walk or bike ride at these local parks
To Top