It began with one online ad. I had been innocently reading a news article when my eyes strayed to the sidebar where Disney World was promoting its seasonal vacation deals. The company does this each spring, offering last-minute bargains for any impulse vacationers looking to save a few (hundred) dollars—and willing to brave the humid swamp of central Florida in summer.

Seldom am I enticed by advertising clickbait. But last year, Toy Story Land had just opened in Hollywood Studios, celebrating the animated world where Woody, Buzz and all their friends come to life. My daughter Sadie had been raised on the Toy Story film franchise, and we had been following the construction progress since its announcement. I’m still not sure which of us was more excited.

Now, there on my screen, a smiling family was pictured on the new Slinky Dog Dash roller coaster, apparently having way more fun than I was on my couch. Within minutes, I found myself immersed in mouse math, wondering why Disney’s claim of $100 per guest per day sounded so affordable.

“Well, that doesn’t include meals,” I said to myself, which only conjured images of me eating a Mickey Ice Cream bar while standing in line for Splash Mountain. That’s when I knew they had me. Food on a stick? Yeah, I’m in.

Vacations to Orlando are not meant to be spontaneous. They usually take up to a year of strategic planning, often involving detailed agendas, maps and the sort of tactical preparation rarely seen outside of a military operation.

“We roll out at dawn. As we move down Main Street, keep your eyes and your ridiculous fake ears open. Standard formation, two in front scouting balloon vendors while the rest of the troops watch for photo ops with people dressed as animals. If all goes as planned, we will conquer Tomorrowland by noon and we’ll be eating churros in front of the castle when the parade starts.”

Planning. of course. takes time, a luxury we did not have. It was already late July and summer was ticking away. If Sadie and I were going to pull off this trip before school began, we would need to forgo most of the usual preparation. We were already months behind other travelers in booking hotel rooms, restaurant reservations and ride FastPasses. Customized matching T-shirts were out of the question.

The short timeframe actually worked in our favor, as there was no chance to stop and ask ourselves questions. Could this even be done? And would it be worth it?

Less than three weeks later I would have those answers: Yes and yes! With some ingenuity, an impromptu trip to the theme park capital of the world can be pulled together in very little time. And there are ways to keep it relatively inexpensive while maximizing the fun.

For starters, call Disney rather than using the website. A phone representative took my request for a room in the newly renovated part of our hotel and explained how to simplify the check-in process.

She also suggested purchasing the basic dining plan—two quick-service meals and two snacks per day—which proved to be ultra-convenient and a bargain. We all know that Disney magic ends at the cash register, so every dollar saved helps. Most importantly, she rush-shipped our MagicBands, the wearable devices that would serve as our park tickets, meal vouchers and room keys.

After booking, stalk the Disney website for any cancellations other guests have made. I logged on several times each day, landing reservations to Chef Mickey’s and Be Our Guest, two restaurants usually booked months in advance. FastPasses were less easy to come by, despite my persistence. All of this required some determination. But, a mere 18 days later, our trip went from concept to liftoff. To infinity, and beyond!

More accurately, we had snagged the last two seats on the early JetBlue flight, direct from Syracuse to Orlando. Having no layover was key, as the timing of our arrival would dictate what we could accomplish on that first day.

We landed at 9 a.m., took the free Disney’s Magical Express bus to our hotel, dropped off our bags, and used the Lyft app to get to Universal Studios Florida for some wizarding with Harry Potter and company. At 11:15 a.m., we walked through the gate, having completed the journey more quickly than broom travel.

Over the next three days, we visited five theme parks and went on more than 50 rides, several of them twice. We skipped shows that would eat up our time and avoided rides with long lines. Staying on site allowed us to take advantage of all the free transportation, including buses, boats and monorails. It also granted us access to Extra Magic Hours: morning and evening time slots when Disney parks are open solely to guests staying in its hotels.

We opened two parks, riding the wave of other guests scrambling to get in line for the more popular attractions. Upon entering Hollywood Studios, we sprinted to Toy Story Land where the new coaster awaited us, the presumed highlight of our trip. We bypassed one prime photo spot after another, rushing only to find . . . a broken ride.

The line was 90 minutes long and growing. We stood there in shock, having no idea when the coaster might come back on track. I began to panic, unlike my daughter.

“We’re getting on that ride,” she assured me, saying it with the conviction teens usually reserve for ordering at Moe’s Southwest Grill.

With everyone stuck in line, we had free rein over the rest of the park. And Sadie was right: We rode the roller coaster twice that day. Our Toy Story had a happy ending.

Feeling this adventurous? Then act fast. This year, the summer deals end on Aug. 28. Why? Because the next day, Disney’s Star Wars-themed land opens. If you choose instead to join those intergalactic crowds, may the force be with you. 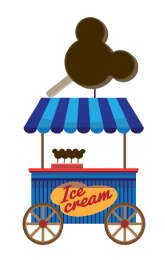 Dog Food for Thought: Trying to keep your pet from your plate
A Trek to the Queen City: Buffalo offers a lively waterfront and more
To Top