Planning a summer excursion with a tween can be tricky: You want an adventure that is neither too babyish nor too sophisticated for a 10- to 12-year-old. I found just the right destination: Buffalo.

A straight shot on I-90 just two and a half hours to the west of Syracuse, Buffalo is fun for a day trip or a longer getaway. This western New York city once had a reputation for being dowdy, but in recent years it’s come into its own. Today the city overflows with outdoor activities, history, food and entertainment for all ages.

My daughter, Renata, age 12, and I invited another mother-daughter pair along for the day. The moms packed plenty of snacks, and the daughters brought along books and games. We left in time to arrive at Canalside Buffalo, the revitalized waterfront on the Buffalo River at Lake Erie just before 10 a.m., when attractions began to open. One of Buffalo’s nicknames, “The Queen City,” derives from its status as the second-largest city in New York state.

On the boardwalk, a sign noted that the location was at the west end of the Erie Canal, which opened in 1825 to “carry products and people between Lake Erie and the Hudson River” and back again from Albany to Buffalo. Seeing the marker, I broke into the opening verses of the “Erie Canal Song” (“I’ve got a mule and her name is Sal. . . ”). The girls fled to the nearby lawn full of colorful Adirondack chairs to distance themselves from the spectacle.

There’s a ton of programming scheduled for Canalside throughout the summer, ranging from yoga on the lawn, to live music, to touring historic tall ships docked in the harbor. Be sure to check out the calendar at canalsidebuffalo.com before scheduling your visit.

Important tween travel tip: Don’t leave the waterfront without getting a selfie with Buffalo’s newest icon, Shark Girl. And if the weather is in your favor, we recommend taking a spin on one of the Reddy Bikes, which are parked on the wharf.

My daughter and her bestie had picked the Buffalo and Erie County Naval and Military Park as our first stop. The park opened in the summer of 1979 with a mission to develop community appreciation of the U.S. Armed Forces, honor veterans, and inspire citizens. Home to the USS Little Rock (the only guided missile cruiser open to the public), the destroyer USS The Sullivans (a National Historic Landmark), and submarine USS Croaker (on the National and New York registers of historic places), it met its mission with military precision while meeting our mission of staying dry during the rain.

We started with a walk through the museum, a small but mighty collection of military memorabilia. While we mothers ambled through the exhibits, the girls zipped from one interactive display to another, looping back to announce bits of trivia they’d learned. “Mom! Did you know that in World War II, Monopoly games were sent to POWs and they had secret escape route maps in them?” “Mama! Did you know that soldiers got candy in their rations for quick energy?” “Moooooom! Did you know that Wrigley’s gum was used to patch jeep tires, gas tanks and even life rafts? Eeeewww!”

Next, we toured the three ships docked outside. The self-guided tour begins on The Sullivans, following the yellow tour route lines for safety—and to ensure we could find our way out of the depths of these massive structures. The vessels are definitely not stroller-friendly or ADA-compliant. If you struggle with stairs, ladders or narrow passageways, this attraction might not be for you. The girls—full of imagination and energy—took off down the yellow line ahead of us.

When we reunited after passing through The Little Rock and Croaker, it was the moms who had trivia to share. “Girls! Did you know that the Navy term for ‘drinking fountain’ is scuttlebutt?” “Hey girls! Did you know—?” They didn’t, and they were done. Famished. Time for lunch. 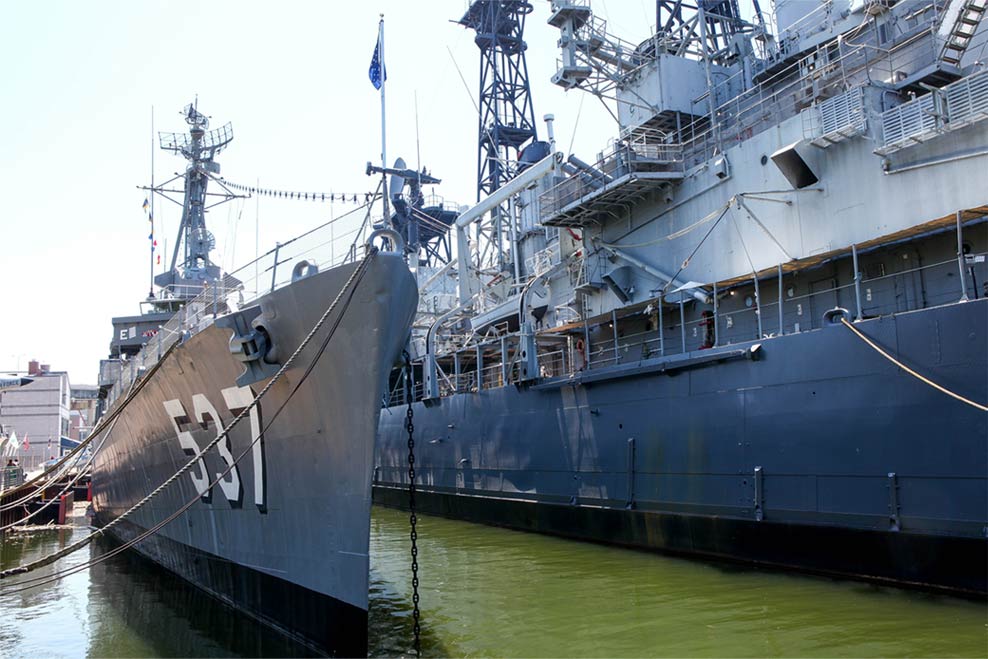 Scenes on the Buffalo waterfront; Vessels docked at the Buffalo and Erie County Naval and Military Park

There are plenty of options for food and drink on the waterfront and adjacent streets, ranging from the Liberty Hound inside the Naval and Military Park’s museum to a uniquely historic take on a Tim Hortons on a nearby side street, to ice cream, beer gardens and food trucks along the boardwalk. You could easily make a full day of it on the waterfront alone. If that’s your plan, we recommend lunching in the area, then heading to the Explore and More Children’s Museum (in its brand-new Canalside location), taking a Harbor Cruise, or hopping on a Reddy Bike for a 20-minute pedal over to the Times Beach Nature Preserve for birdwatching.

We followed up on a friend’s strong recommendation of an all-time favorite pizza place and drove a half-hour to visit Rocco’s Wood Fired Pizza. If you didn’t know what you were looking for, you’d never notice the storefront on the endless strip mall of Transit Road in Williamsville.

The blandness of the suburban plaza’s façade in no way represents the quality of the experience inside. The décor is a blend of classy bistro with a touch of cheesy Italian restaurant, just right for family dining, even with kids younger than ours.

The menu features roasted wings (a unique take on classic Buffalo wings), eggplant parmesan, beans and greens, meatballs in sauce, and more. But the main attraction is the wood-fired pizza. Choose from fancy topping combos like prosciutto, fig puree, pickled red onion, gorgonzola, mozzarella and arugula. If you’re trying to satisfy a young person’s selective palate, you can go with standard toppings on one half and try more grown-up options like broccoli rabe and hot cherry peppers on the other, as we did.

The stop was well worth the trek to the ’burbs. And, considering the relative proximity to I-90, you could easily make this your dinner destination before heading home. 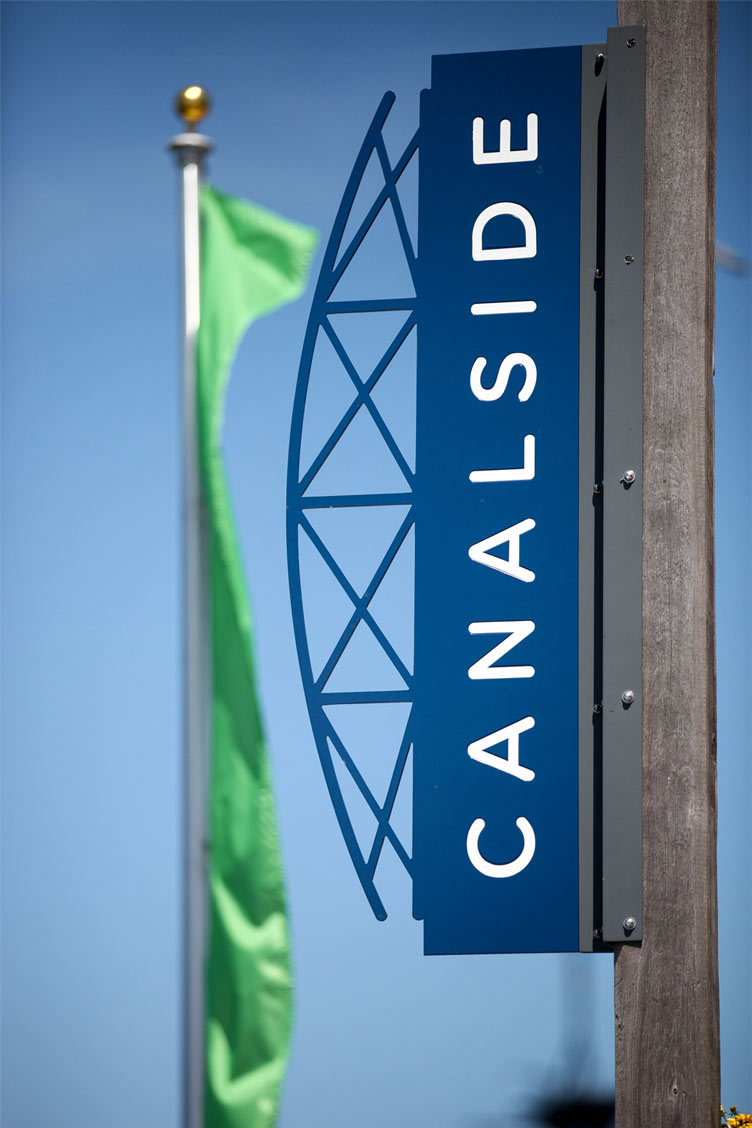 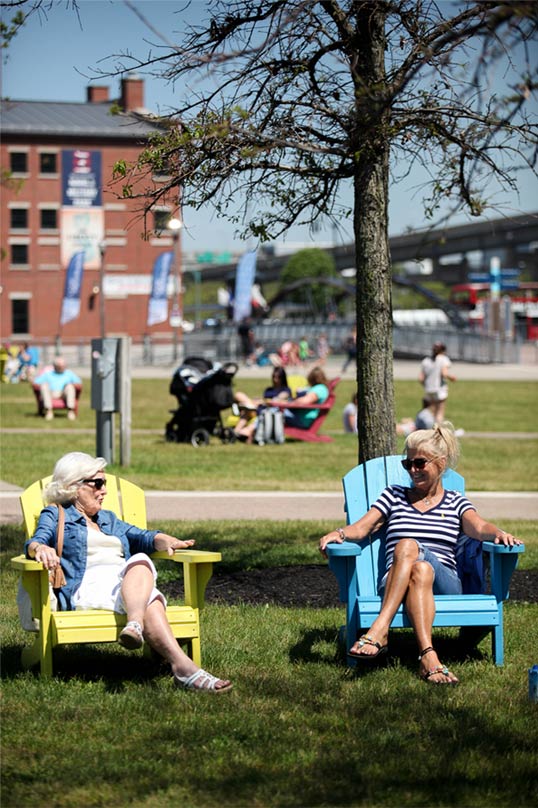 Scenes on the Buffalo waterfront; Adirondack chairs on the lawn next to the canal.

The girls took responsibility for choosing our afternoon adventure from a short list, limited primarily by the unrelenting rain: the Albright Knox Gallery; the Buffalo and Erie County Botanical Gardens; the Buffalo Museum of Science; the Burchfield Penney Art Center; Frank Lloyd Wright’s Martin House; and the Herschell Carrousel Factory Museum. Using our phones, they researched features, hours of admission, and directions.

The girls chose the Botanical Gardens. It took 30 minutes to reach the national historic site. The conservatory was modeled after the famous Crystal Palace in England. When it opened in 1900 it was the third largest public greenhouse in the United States and the ninth largest in the world. It was a highlight of the 1901 Pan-American Expo, but by 1929 the city of Buffalo was considering demolition. But thanks to visionary volunteers who took up the cause, this gorgeous structure still stands. 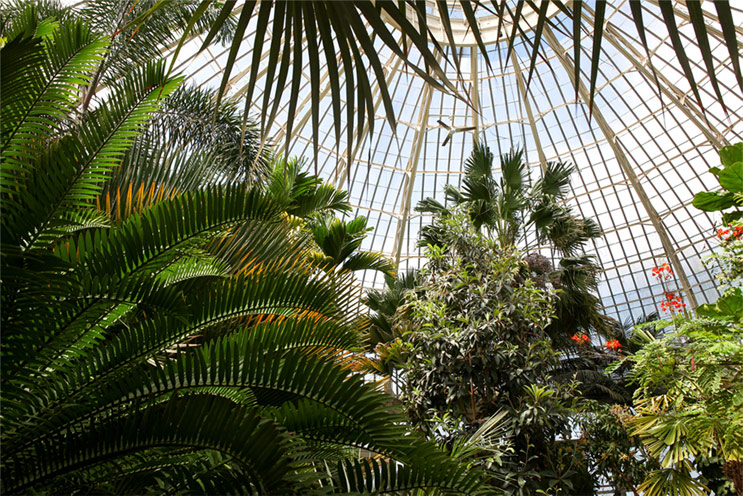 A glimpse of the Buffalo and Erie County Botanical Gardens, with a conservatory that opened in 1900. Below, some of the plants.

Guided tours of room after room of exotic plants can be booked with at least three weeks’ advance notice, but the sprawling complex is well-suited to just wandering wherever your kids’ curiosity leads. We recommend bringing cameras or letting the kids commandeer parents’ phones to photograph the flowers. As they did on the ships, the girls leapt ahead of us slower adults. Without the benefit of a yellow line to keep us all on the same track, it was more complicated to stay connected. When we reunited in the gift shop and took a look at the girls’ snapshots, we were blown away by the beauty they captured.

The conservatory closes at 4:30 p.m., but that will give you time for the most important item on any summer agenda: ice cream. The challenge on a rainy day is finding a place where you can enjoy your sweet treat indoors.

Thank goodness for Antoinette’s Sweets. This little shop and parlor on Transit Road in Depew, not too far from our lunch spot, has been serving up sponge candy, molded chocolate treats, and ice cream concoctions since 1915. Take in the visual extravaganza of the candies on one side of the crowded space, then head over to the long counter to place your ice cream order. There’s plenty of seating in booths and at bistro tables indoors.

With our craving for a sweet conclusion satisfied, and tired out from a full day, it was an easy three-minute hop from Antoinette’s to the Thruway and our way home. We’ll be back. 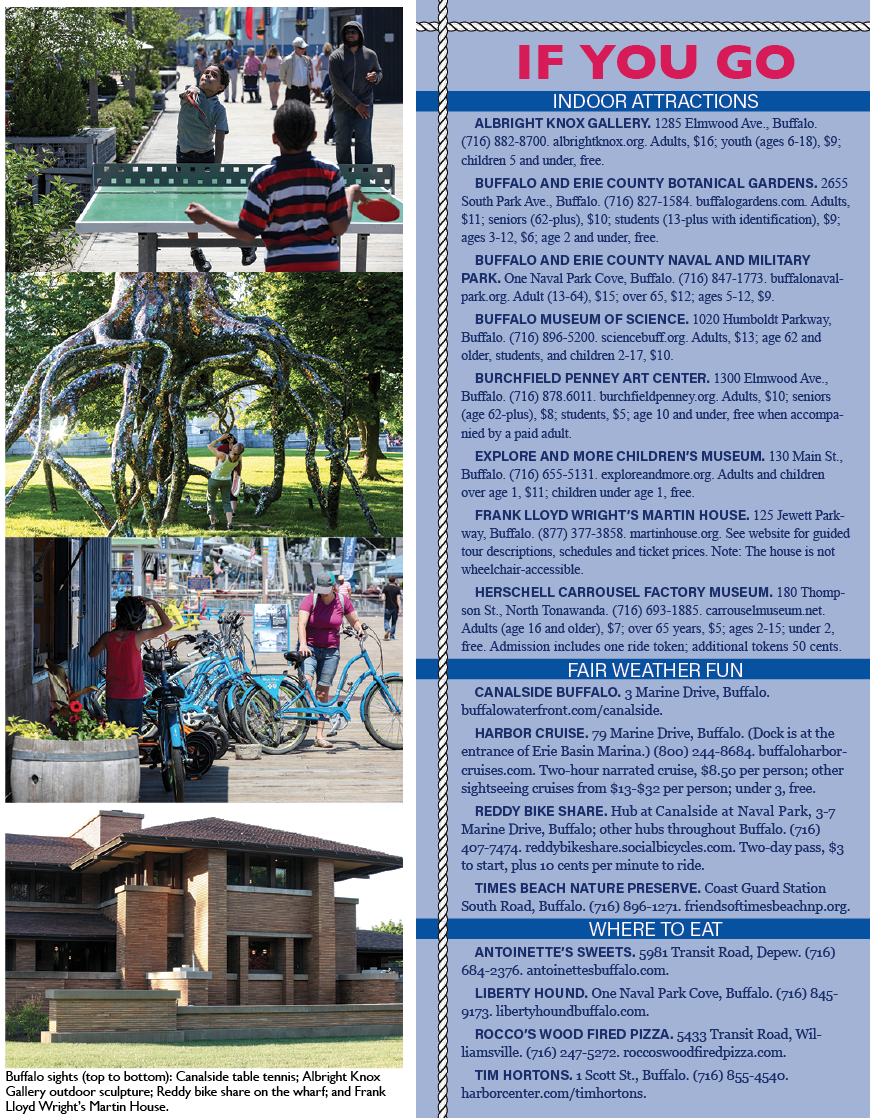 Unplanned Orlando: An impromptu trip was more than a fantasy
Looking to kick off the summer fun? Check out the July Event Calendar!
To Top