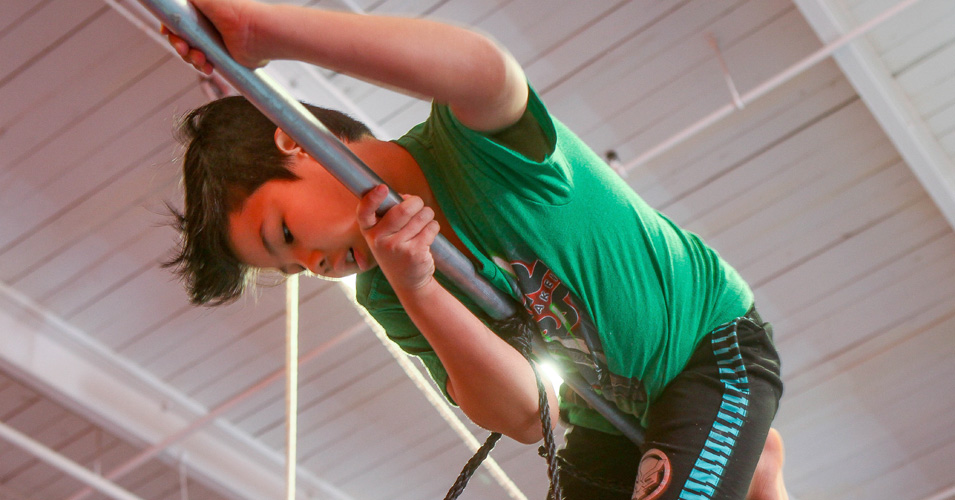 A growing number of Central New York kids are turning to a new kind of training: ninja gymnastics.

“He just needed a sport where he can climb and do flips, and he loves the challenge of overcoming obstacles,” says Leslie Michel, of Marcellus, of her son, Jack, age 10. Jack is in Ninja Gymnastics at the West Side Gymnastics School in Syracuse.

With obstacle courses participants must run, jump, climb, crawl, dodge, swing on ropes and problem solve in order to make it through. The courses are naturally appealing to children, ninja sports enthusiasts say.

Obstacle courses are challenging but offer more variety and are simply more fun for well-rounded competitors. With an interest in fitness increasing among so many age groups, existing gyms, gymnastics centers, martial arts dojos and other recreational facilities are ready to offer infrastructure and trained personnel to meet demand for the latest craze.

Ninja gym participants can typically pay by the session or by the month. Costs are similar to that of memberships for a martial arts school or gymnastics center, from $60 to $80 a month, with at least one class per week. 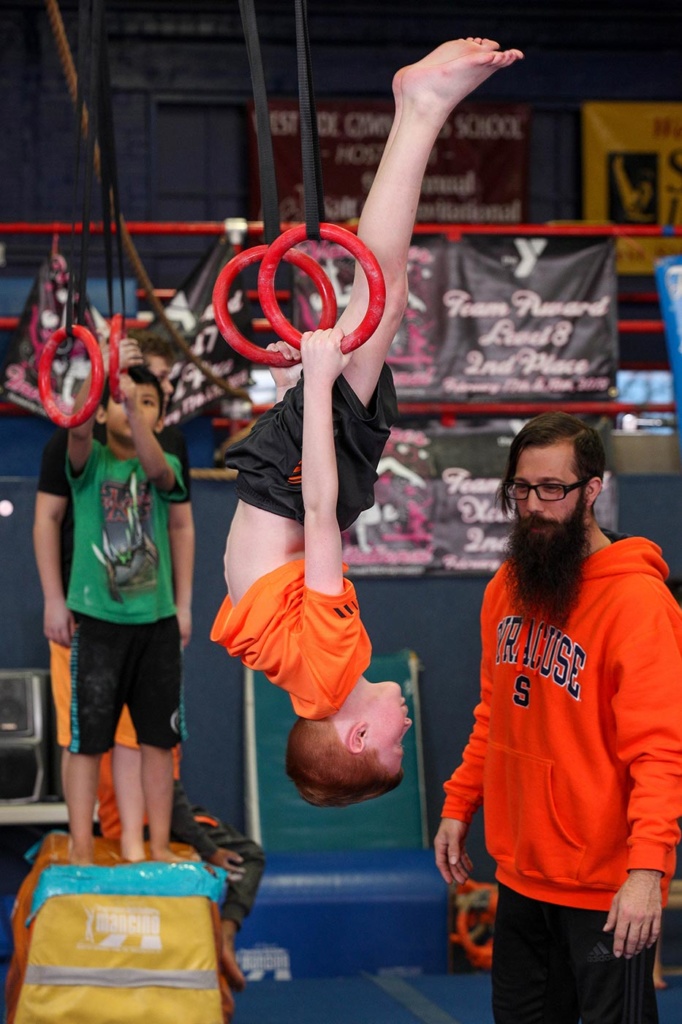 Ninja gymnastics participants go through the course at West Side Gymnastics School in Syracuse, under the watchful eye of instructors. MICHAEL DAVIS PHOTO

West Side Gym — where Leslie Michel’s son Jack is enrolled — is somewhat unusual in that it incorporates a fair amount of tumbling training into its ninja classes. Jack also visits the Ninja Barracks in Liverpool. When he was younger, Jack preferred climbing trees to lacrosse and baseball. This type of activity seemed like the perfect fit, his mother says.

“He is competitive; that was not the issue with the other sports,” Michel says. “He just needed a sport where he can climb and do flips, and he loves the challenge of overcoming obstacles.”

Jack goes to the West Side Gym program twice a week and participated in an outdoor Spartan Race competition in Vermont last year with his father. He wants to train competitively for future Spartan Races and youth ninja-type competitions.

Blaze Gymnastics in Cicero has a Ninja Zone program and even a Baby Ninja program for toddlers. Owner Christina Fuller said she does not believe ninja programs threaten the customer base of traditional gymnastics programs. The gymnastics world is still reeling from the demise of its governing body, USA Gymnastics, which was sanctioned and sued following the sexual abuse conviction of former national women’s team physician Larry Nassar, who was sentenced to up to 175 years in prison.

“Yes, it definitely hurt the gymnastics industry across the country, but so far we have not lost (participants) because of it,” Fuller says. “I think the key is to let parents know why, right from the start, we feel screening and background checks are so important.”

The program at Blaze incorporates many aspects of the martial arts. Its obstacle course requires participants to perform sets of kicks and punches in which their technique and flair are also factored into their scores for getting through the obstacles quickly. When the kids demonstrate proficiency, they are awarded a colored headband, similar to the concept of earning a belt rank in karate or taekwondo.

In its first five months of operation, Blaze’s program had 187 youth participants, making it the fastest-growing Ninja Zone program in the country, Fuller says. Ninja Zone is one of several programs of its kind that is franchised around the world. 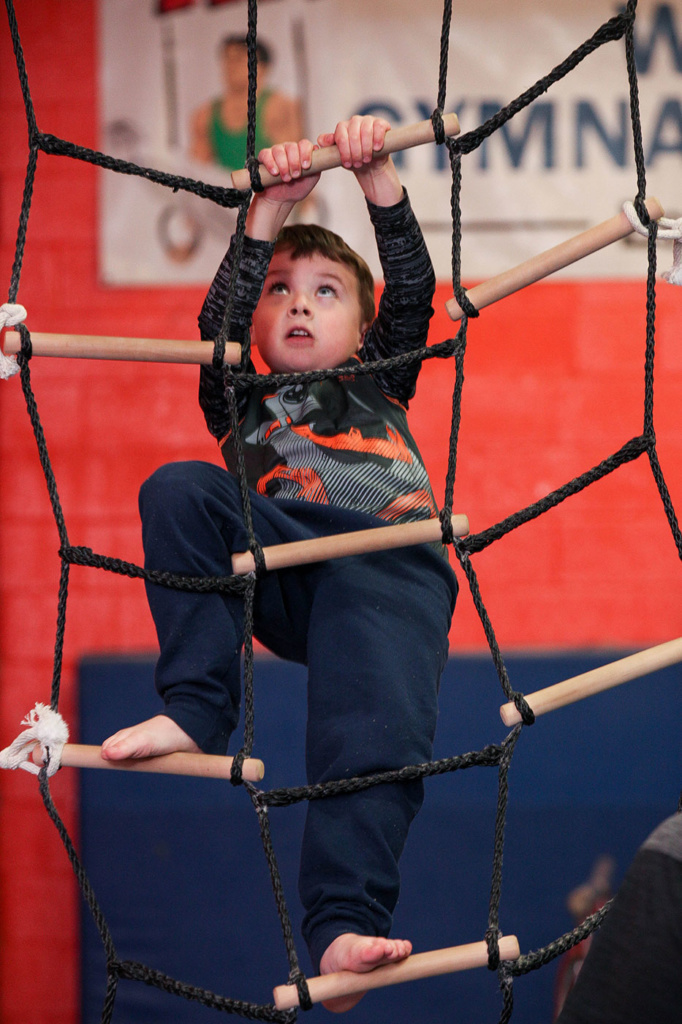 “I think the reason it’s so popular is because it gives the kids an opportunity to freestyle,” Fuller explains. “You don’t need to have the perfect somersault. If you have good character, you will develop strength and agility that you can use in other sports, or you can bring it to the playground. It’s a foundation that they can use for anything.”

Trillium Sports and Fitness in East Syracuse offers ninja camps and ninja birthday parties. In both programs, participants are led through warm-ups and instruction before taking on an obstacle course. In the past year, says owner Barb St. Pierre, demand for these programs has been astounding. The time slots for birthday parties have been filled every Saturday for months, and there’s been enough interest in the camps for Trillium to offer four-day programs every school break and a series of sessions in the summer.

“I think people like it because it puts all kids on an even playing field, as opposed to soccer or baseball where a kid can feel left out if they don’t have as much skill as the others even if they have the determination,” St. Pierre says. “It’s not like a sport where you have an advantage if you’ve played a lot of catch or passed the football around before. Most people are new to this the first time they try it. No one should feel intimidated.”

The camps at Trillium cost $45 per day and serve children from ages 6 to 15. The gym assigns one trainer for every four kids. St. Pierre says she is struck by how kids have embraced regulations about safety, which helps them to develop self-discipline.

“It improves their balance, agility, flexibility and problem-solving skills, and it boosts their confidence because they have achieved something they didn’t do before,” St. Pierre says. “But when you see them being so careful about going one at a time and being careful about things — that responsibility — it’s really impressive.”

Syracuse Ninja Barracks, located inside the Pacific Health Club in Liverpool, trains children and adults alike for obstacle competitions. It follows the recommended guidelines of the American Ninja Warrior program and offers some of the same obstacles that are seen on the television show, says Ryan Scott, owner. His five months in business so far, he says, “have been absolutely awesome.”

Scott, a personal trainer by trade who has a strong background in gymnastics and yoga, also works with participants with Parkinson’s disease, multiple sclerosis and autism. Obstacle courses, he says, are great tools for helping individuals gain independence. 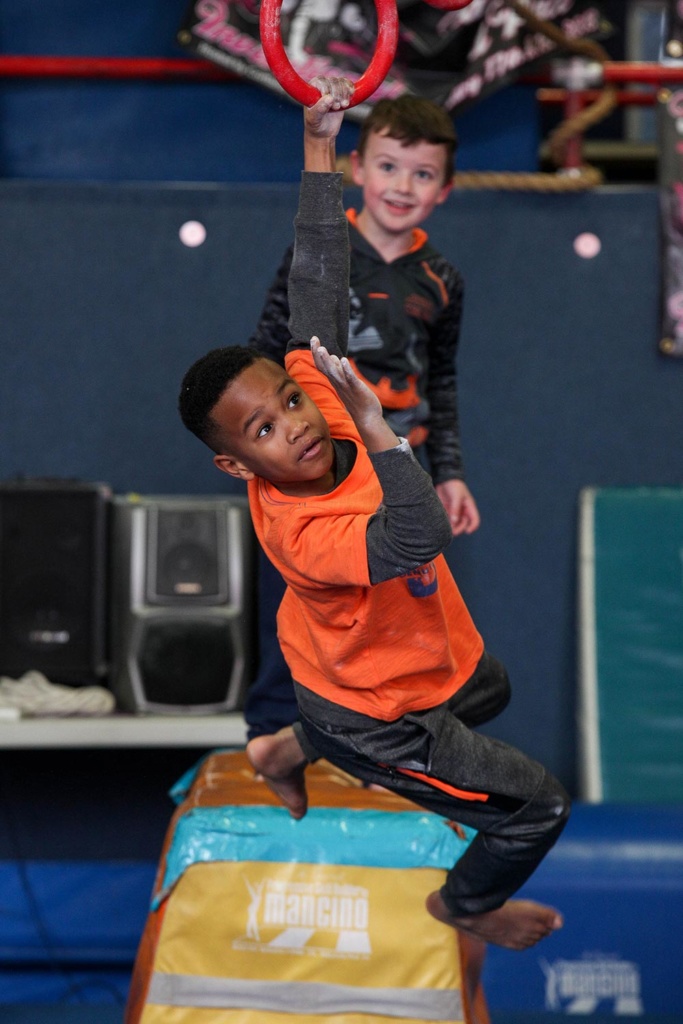 The ninja course at West Side Gymnastics features rings, a foam block pit, a trampoline and a rope ladder. MICHAEL DAVIS PHOTO

“It’s nice to see folks get the hang of it and start figuring things out by themselves,” Scott says. In one case, an 8-year-old boy who suffers from a spine injury and walked on his toes was able to learn how to walk correctly as he completed challenges on the obstacle course.

“It’s not a fluke,” Scott says. “With physical obstacles in front of them, people with disabilities can conceptualize what they need to do to start overcoming a disadvantage.”

The activity also provides a supportive environment and fosters sportsmanship. None of the kids or adults see fellow participants as opponents. “Everyone is very supportive of each other,” Scott says.

American Ninja Warrior is now starting its 11th season. The participants selected for obstacle course competitions and appearances on the show must be well-rounded athletes — and they have to have a gripping back story. Competitors who have overcome great odds give viewers a reason to root for them. The athletes earn their way to the top by winning regional competitions before advancing to national and world-level contests that offer large purses to the winners.

The most successful competitors, both men and women, are not always bigger, stronger, smarter, more athletic or better motivated than their competitors. The sport is unique in that the top finishers find a way to balance those physical and emotional attributes with patience and strategy. Often times, their life experiences play a role in their success on the obstacle course.

Nicole Thibodeaux, a trainer at Syracuse Ninja Barracks, says that everyone she has worked with, young children and adults alike, underestimated the difficulty of the obstacles and the training. And yet, few people have given up on the program so far.

“I think because it’s so fun and rewarding,” she says. “People watch the show and think it’s going to be a piece of cake. But then the kids realize they aren’t going to fly through the course. But the challenge is enticing to everyone. They learn that they have to listen better and practice harder.”

May 2019’s Club of the Month: Ecology Club at Lyncourt School
May 2019 Events
To Top