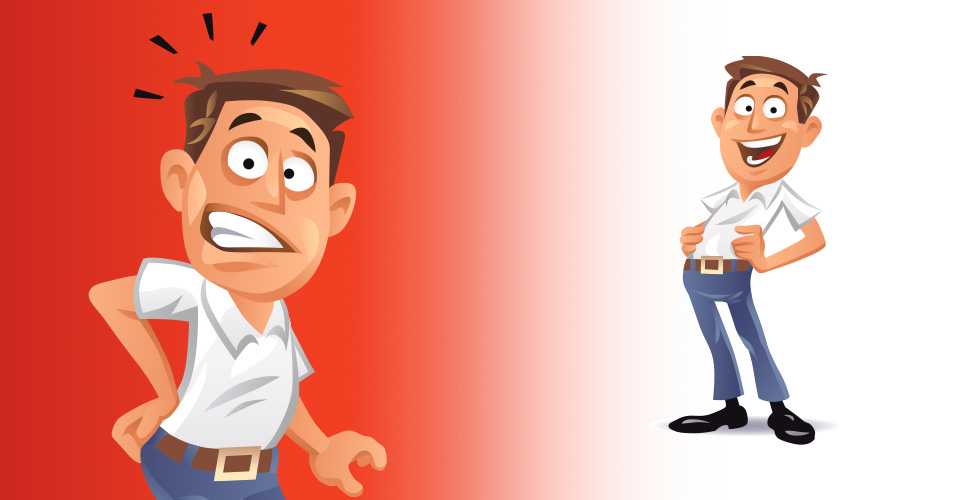 My hair is turning gray. There’s a chance I need reading glasses. I drive the speed limit and I appreciate the artistry of a well-groomed lawn. Go ahead, call me old.

The typical signs of aging have never bothered me. I’m a father, I look forward to voting, and I occasionally check my 401K. If I ever forget my age, I can always rely on the Teen Choice Awards to set me straight. I have zero interest in watching Riverdale, nor do I care what the Maze Runner is running from. I guess it’s been a few years since I belonged to pop culture’s target audience.

I’m okay with all of that. See, I’m still on the comfortable side of 50. Plus, I subscribe to the theory that you are only as old as you feel. Generally, I feel great. It’s a rare day that I fall short of the 10,000-step goal on my Fitbit. Last summer, I was even running three or four miles several times a week. Not bad for someone less than a decade away from the senior discount at McDonald’s.

Then it happened. One ordinary Tuesday, my body seemingly aged a generation in a matter of seconds. Any injury can make you question your youth, but a back problem is the benchmark for a person being past his prime. Perhaps it’s because a poorly located muscle strain can be so instantly debilitating and inexplicable. One minute I was moving effortlessly around the house, and the next I was hobbling like the old man from Up.

Two years earlier, I had suffered a worse injury, a full Achilles tendon rupture that resulted in crutches and months of physical therapy. But that trauma was earned. I had been playing a game of pick-up basketball with a group of other fortysomethings, each of us intent on pretending we were still as agile as our 20-year-old selves. When I jumped up for a rebound, I came down not only with the ball but with the foolish pride of someone who viewed a swollen ankle as a consequence of fierce competition. The hard cast I wore for two months became a badge of honor.

My back injury was different. I was merely attempting to bring a medium-sized package in from the porch. It barely outweighed our cat. But in my haste, I had not followed the classic advice to lift with your legs. The next morning, I needed 10 minutes to stand fully upright.

I was officially over the hill, and the ride down the other side appeared slow and tricky. I spent the entire day resting, treating myself with an ice pack, ibuprofen and bad television. If an hour of Maury Povich won’t get you off the couch, nothing will.

My Fitbit joined in, vibrating and blinking out an inspirational reminder: “Today is the day!”

It didn’t seem to understand how clearly defined my physical limitations had become. My own mortality was staring me in the face and I was going to respond as any reasonable person would. “Today is the day,” I replied, “to lie here and sulk, and hope that the batteries in the remote keep working.”

Back injuries can be so self-defeating. As a parent, you are supposed to be active, knowing that your children rely on you for everything. I felt lucky to not have a toddler running around the house. (My daughter, at 16, knocks over a lot fewer house plants than she used to.)

But that didn’t stop me from worrying that this was the beginning of the end of my mobility, possibly sidelining me during key parenting events. Sadie might soon need help moving into her college dorm. Instead, all I could picture was her assisting with my own premature move into a retirement community while I cursed the heavy Syracuse winters that had taken a toll on my body.

So, on my third sick day, I limped into the Upstate Orthopedics office where an X-ray of my spine drew the curiosity of the physician assistant. “I’m scheduling you for an MRI,” she said, pointing to the gray mass between my L4 and L5 vertebrae. “This disc might be giving you trouble.”

Her diagnosis was nowhere near as comforting as the steroids and muscle relaxers she prescribed. The pain soothed to the point that I didn’t even mind the MRI machine being overbooked. There was a four-week wait for non-emergencies and my sad box-lifting story apparently didn’t qualify.

As I healed, my Fitbit continued its motivational assault, each message treading the line between encouragement and nagging. “Time to get moving!” it would suggest, though I interpreted it as, “Seriously, how much Food Network can a person watch?”

For nearly a month, I remained in lumbar limbo. Following medical advice, I practiced McKenzie exercises, a series of stretches designed to treat musculoskeletal conditions. The method was devised by Robin McKenzie, a physical therapist who apparently believed in the benefits of contorting oneself like a Cirque de Soleil performer. (To my surprise, the stretches helped and I continue to do them.)

An MRI eventually revealed two bulging discs in my lower back. With no surgery required, I was advised to use caution in my return to work. I soon discovered how common my setback was. Everyone my age seems to have dealt with some back issue, and each person is eager to share whichever chiropractor, acupuncturist or yoga move worked for them. It was comforting to know that I was not alone in my vulnerabilities.

Age really is just a number. At 48, I’m not in the worst shape. Sure, I could stand to lose three or four (or 12) pounds. But I’ve learned that a back injury is not necessarily a reason to panic. The key is to know your limitations, and to seek help when you’ve reached them. Understand that recovery might take time. And learn how to silence your Fitbit.

Will Work for Food: How I got my kids to help make dinner
Newborn Protection: Preventative care, including shots, safeguards infants against serious conditions
To Top