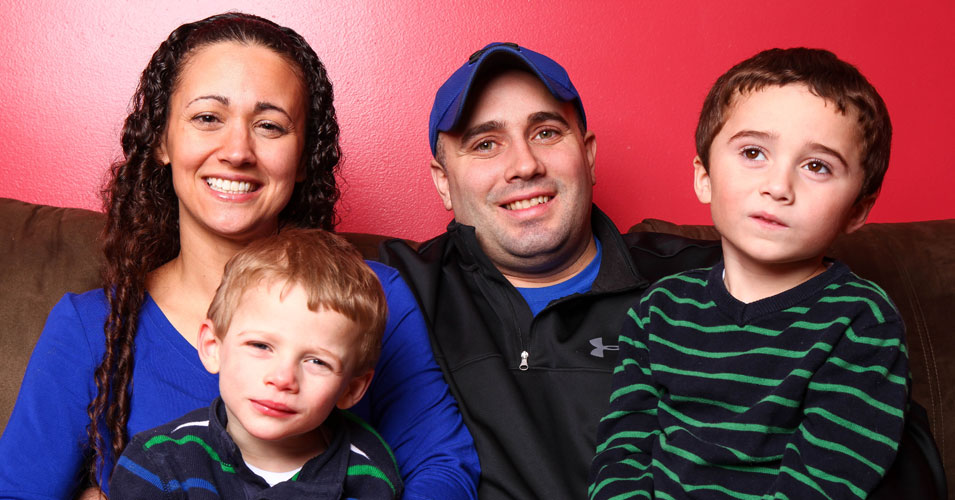 Right near the front door of Justin and Kristina Bomgren’s Baldwinsville home hangs a recent photo of their two sons. Dominick, 5, is bright-eyed with shiny, dark hair. Evan, 3, is fair-haired with a kind, peaceful face. Both boys are smiling, clearly delighted in each other’s company. Hair color aside, there is a clear family resemblance.

But what the photo doesn’t show is that Evan is living with Angelman syndrome, a rare genetic disorder that affects the nervous system. He is an adorable toddler who smiles a lot and loves to be the center of attention. But he also suffers from seizures and digestive problems. His walking is unsteady, and although he can comprehend much of what is said to him, Evan has only uttered one word so far: Mom.

“His receptive language is very good, and he is generally well tempered unless he is ill,” Kristina says. “He can generally get his point across.”

Diagnosing Angelman syndrome is challenging, and children who present symptoms are often misdiagnosed with other disorders like autism or cerebral palsy. Kristen, a reading teacher with the Central Square Central School district, says that she and her husband, Justin, a reading teacher in the Fulton City School district, first noticed symptoms in Evan when he was about 3 weeks old. Feeding Evan was challenging and Kristina knew that he was not thriving.

“They thought it was a milk-protein allergy, so we tried multiple formulas and milks, and still he wasn’t gaining weight,” Kristina recalls. “He was growing in height, but not weight. They wanted to put a feeding tube in him, but we refused. I was literally feeding him with a syringe.”

By the age of 6 months, Evan was not hitting developmental milestones. He could not hold his head up and was still not gaining weight. At about a year old, the seizures started.

The Bomgrens were referred to a genetic specialist and at 13 months, doctors found a deletion on Evan’s 15th chromosome. This led to an initial diagnosis of Prader-Willi syndrome. After further testing, Evan was diagnosed with Angelman syndrome in May 2016.

Since then, the Bomgrens’ lives have become a whirlwind of self-education and precision scheduling. They travel to Boston twice a year to see a neurologist and a dietician who specialize in Angelman syndrome. Evan currently receives ABA (applied behavior analysis) and early intervention therapies — such as speech, occupational and physical therapy — six days a week.

Kristina and Justin are constantly looking for ways to lessen Evan’s seizures. And they work with a nutritionist to help Evan with an ever-evolving variation on a low-glycemic-index diet, which avoids potential allergens, promotes muscle growth and is packed with natural fiber.

“With Angelman patients, for some reason their seizures are very hard to control. He takes medicine (Onfi and hemp oil) for them, which has helped a lot. But (it’s) not totally taking care of them,” says Kristina. “That is the one thing I wish I could alleviate for him. It just kills me every time he has a seizure.”

Every night, the Bomgrens meticulously cut and portion out avocadoes, flax seed, beans, coconut bread, vitamins and other foods that Evan can have. Everything is prepared for his weekday sitter: Kristina’s aunt, Paula Skiff. Until recently, all of Evan’s food had to be pureed. 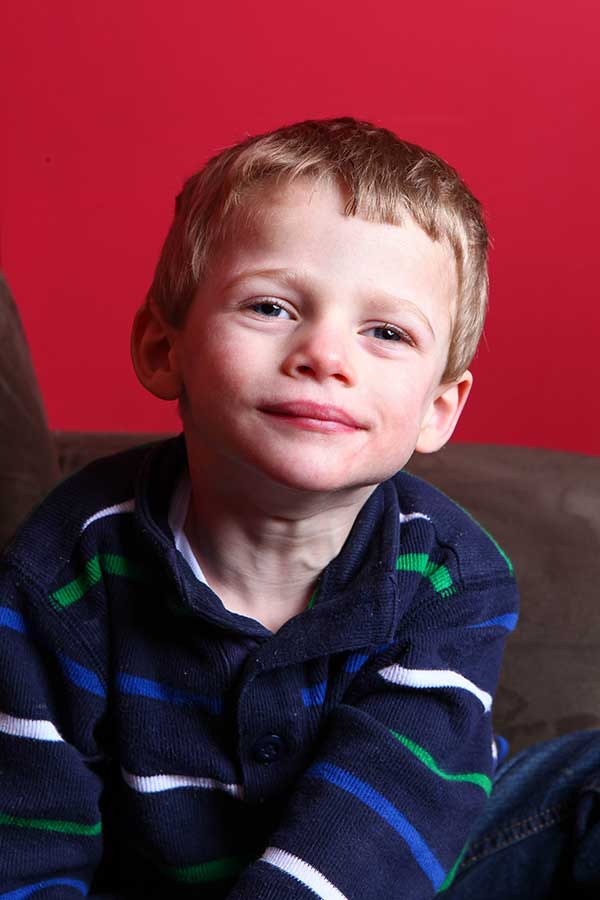 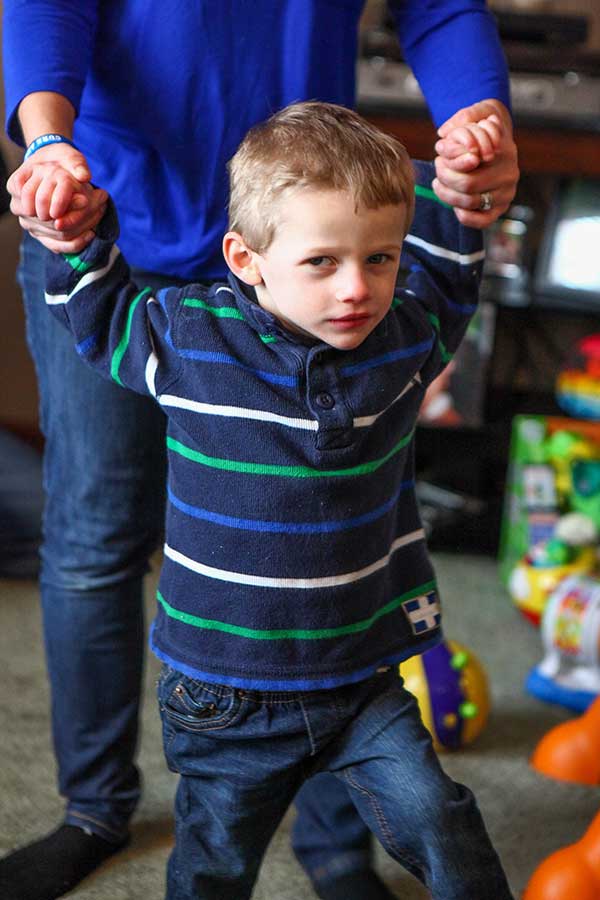 “At first we were grinding up meat, but then he was having issues with meat,” says Justin. “We are continually adapting his diet based on the seizures he is having.”

Evan has tried other specialized treatments, including aquatic therapy and tablet device training, using the TouchChat communication app. On Thursdays, Evan goes to Upstate University Hospital’s PT center to use the Locomat, an automated treadmill-like device. He sees an eye doctor to monitor a slight turn in his right eye, characteristic of some Angelman patients, and a chiropractor to avoid the development of scoliosis — also common with AS.

With the physical therapy, the Bomgrens like to switch it up and have Evan try new things. Keeping him engaged seems to yield better results. “He will let you know if he doesn’t want to do something,” Justin says. “He’ll protest. He will crawl away.”

While Evan still struggles with seizures and digestive issues, he has improved in many ways. Despite his rigid joints and variable balance, he is determined to walk. He takes growth hormone shots to help with his developing muscle tone. He happily cruises around the house with assistance, and pulls himself up the stairs.

“He’s very motivated to stand and walk,” Kristina says. “That’s his favorite thing to do right now. The seizure medication has enabled him to do more.”

Evan has also been growing out of the sleep problems that are often associated with Angelman syndrome. Unless he is sick or uncomfortable, he frequently sleeps through the night. He is also getting much better at feeding himself.

In order for their household to run smoothly, almost every moment of the Bomgrens’ day is filled — and it’s a trying process. “To be honest, it’s overwhelming. It’s every single day,” Kristina admits.

“Sometimes, you just want some time for yourself, and it’s not there,” adds Justin.

For the Bomgrens — even with the advances Evan has made — taking time for themselves has been challenging. They try to get a date night in about once a month, and they set aside time to focus on Dominick.

“We do our best, but he’s in school now. We spend so much time on Evan that I worry that he gets left out,” Kristina says. “Dominick loves being a big brother, and they do have things that they like to do together. Evan loves the swing, and we have a water table which they both love.”

While Dominick doesn’t fully comprehend that Evan has a disabling condition, he is starting to ask more questions, and is fiercely protective of Evan.

“He knows his brother is different, but he doesn’t understand this disability yet,” Justin says. “But we don’t focus on that, we focus on their relationship.”

Kristina says they are lucky to have family members close by who are willing and able to help with Evan. “Without my aunt’s help as a caretaker, one of us wouldn’t be able to work,” Kristina says. “My parents are a great support system as well. My mom watches him on Thursdays, and they are our go-tos when we need a night free. Justin’s mom helps when she is in town.”

But hiring a sitter when family members are unavailable is challenging because many people are afraid that they won’t know how to handle it if Evan has a seizure.

“It’s not that I don’t trust people, but knowing that they are nervous about it makes me nervous, and I don’t want them to feel that way,” Kristina says.

A respite caregiver comes to the family’s home on Sundays, but Kristina says that time is often reserved for cleaning and laundry.

Since Angelman syndrome is so uncommon, connecting with other families locally has been difficult. The Bomgrens are active with the Foundation for Angelman Syndrome Therapeutics, which is based in Chicago. With so little free time, online resources and chat groups are a better fit for their current needs, Kristina says.

And they are doing what they can to draw attention to Angelman locally, including a May 19 fundraising walk. Last year’s walk raised more than $5,000. Other walks for AS will be held around the country on the same day.

For families living with AS or other genetic disorders, the Bomgrens say it can be easy to be overwhelmed, first with the unknown, and then by the advice of doctors and specialists.

“Ultimately, you have to do what’s best for your child,” Justin says. “And no one knows what that is better than you do. Question the doctors until you are comfortable with the answers you get. Also, take help when it’s offered and ask for it when you need it.”

Kristina adds that trying to focus solely on the task at hand can help. “Live in the moment and don’t take things for granted. Also, staying hopeful is what gets you through your day. For Evan, I feel there may be a light at the end of the tunnel.”

Like all parents, the Bomgrens think about what their son’s future may hold. They would just like to see Evan reach some level of independence. But in light of the emergent therapies that seem so close to making a cure a reality, who knows what Evan may accomplish in the next 10 years? Kristina finds herself wanting to speed up time to reach a cure for Evan but slow it down to relish all of Dominick’s special moments as he grows up. It’s a difficult balance.

“At first, there was a grieving process,” Kristina says, recalling her reaction to Evan’s diagnosis. “Now, we are just focused on getting him better, and the cure. It’s on our minds. We want him to be his best.”