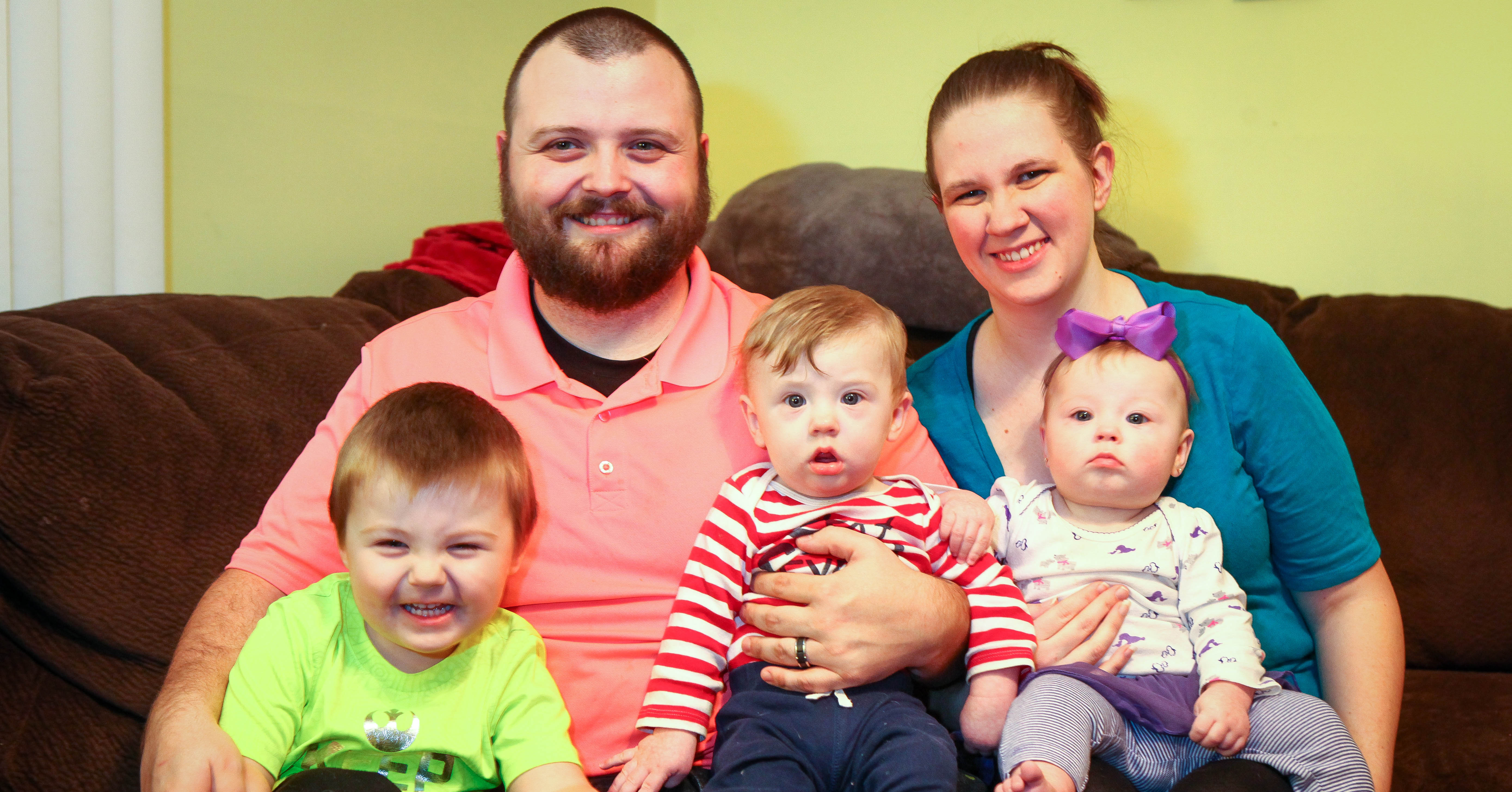 Infertility is an increasingly common problem that affects each woman — and her partner — differently. The physical and emotional stress can be overwhelming.

For Nicole Gates of Mattydale, the strain hit hardest nearly two years after she and her husband, Nick, successfully brought their son Jaxson into the world with the help of in vitro fertilization. The couple sought treatment with Robert Kiltz, M.D., at CNY Fertility in Syracuse after Nicole was diagnosed with polycystic ovary syndrome in 2013. Despite her joy in doting on her son, she became consumed by the thought that she might not ever be able to give him a sibling.

“I felt that I needed to give him that gift, and I was hard on myself for the fact that I couldn’t do that on my own,” says Nicole.

The decision to try another round of fertility treatment was not an easy one, she says. But ultimately, it brought the couple closer. And it gave Jaxson not just one sibling but two: Landon and Harper were born last April.

The Centers for Disease Control and Prevention report that about 12 percent of American women of childbearing age have difficulty conceiving or carrying a pregnancy to term. The Gateses, both in their 20s at the time, endured six rounds of various treatments in their efforts to conceive Jaxson. The pregnancy itself was also troubled.

“I had a fairly rough pregnancy both times,” Nicole says. “With Jaxson, I was diagnosed with gestational diabetes, as well as preeclampsia in the late term, which led to me delivering him at 36 weeks.”

“With the twins,” she says, “we went through infertility treatments twice; once in December of 2015, which did not take. Then in July or August of 2016, we were successful. I had a very rough pregnancy with them, being multiples, on top of all the regular pregnancy complications that I could have. I had hypertension, as well as diabetes and preeclampsia. I had been in and out of the hospital for three weeks at one point.”

With both pregnancies, Nicole, now age 29, and Nick, 30, had decided to have two healthy embryos implanted to increase the chances for success. Very early in her second pregnancy — weeks before an ultrasound confirmed it — Nicole suspected that she was carrying twins.

“Call it mother’s intuition or whatever. I just knew that we had more than one,” she says. “When we went for the ultrasound, we could see two on the screen. My husband looked as white as a ghost. I was full of emotion — joy and fear, pretty much every emotion you can have. It took several weeks, maybe even months, to process the fact that we were having twins. I don’t really think it set in for me until they were here.”

The pregnancy with the twins, coupled with the lingering hormonal effects of the treatments, made Nicole feel exhausted much sooner in her pregnancy than she had for Jaxson. But she was able to carry the twins to 37 weeks, and they were born naturally, without complications, and perfectly healthy: Landon weighed 8 pounds, 1 ounce, and Harper came in at 6 pounds, 13 ounces.

“Initially, I just focused on the end result,” Nicole says. “I didn’t even think about the risk factors.” 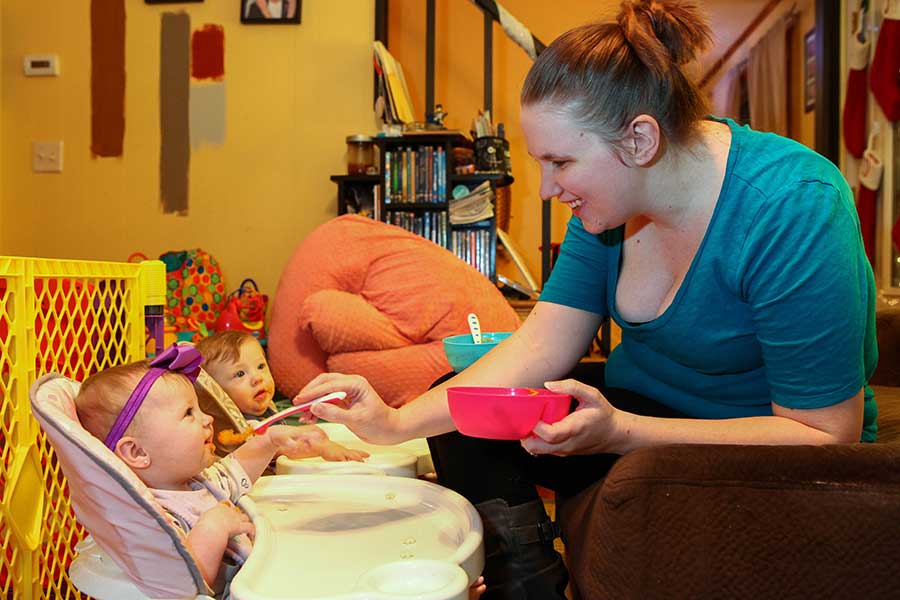 Nicole says while she does not regret any of the treatments she endured, she does regret not sharing more with those closest to her. Now, she wants to discuss her experiences.

Nicole entered Family Times’ 2017 Mommy + Me Cover Contest and was among the six finalists. In the essay she submitted, she wrote: “I wish infertility was talked about more.”

“I eventually became more comfortable sharing our story because I could tell that there was so much that people didn’t know,” Nicole says now. “Honestly, when we went through the process the first time, there were a lot of unknowns. There was a lot of just following what we were told. We had no clue. It got to a point where we had to just take a break, take a step back because it was very overwhelming.”

As the couple decided to embark on another round of treatments, they faced different challenges. Nick admits that he initially had trouble understanding Nicole’s intense need to provide Jaxson with a sibling. An only child himself, he was fine with having just one.

“I just knew what we had to do to get pregnant again — all that emotional roller coaster,” Nick says. “That’s something that people don’t tell you in the beginning (of fertility treatments). You have to make sure that your relationship is on a very strong foundation before you can start. And you have to have a really good support system, whether that’s parents, friends, a church or your community: You have to have something. When you get a negative result, it hits really, really hard.”

“It was rough on our marriage,” Nicole continues. “We would get into fights about silly things. After taking a step back, we decided to try one more time.”

“I firmly believe that putting out positive energy, having the faith and having the hope made us successful,” Nicole says. “I definitely feel like that made a world of difference. Dr. Kiltz had a major role in that.”

The Gateses also learned to respect how each partner deals with infertility. “Infertility affects the woman and the man very differently,” Nicole says. “I had to share the feelings I was having. He never really understood; when you get a negative (pregnancy test), there is an emotional toll.”

Meanwhile, after negative results, Nick was keeping his reactions to himself. When he eventually did open up, Nicole discovered he hadn’t wanted to burden her. 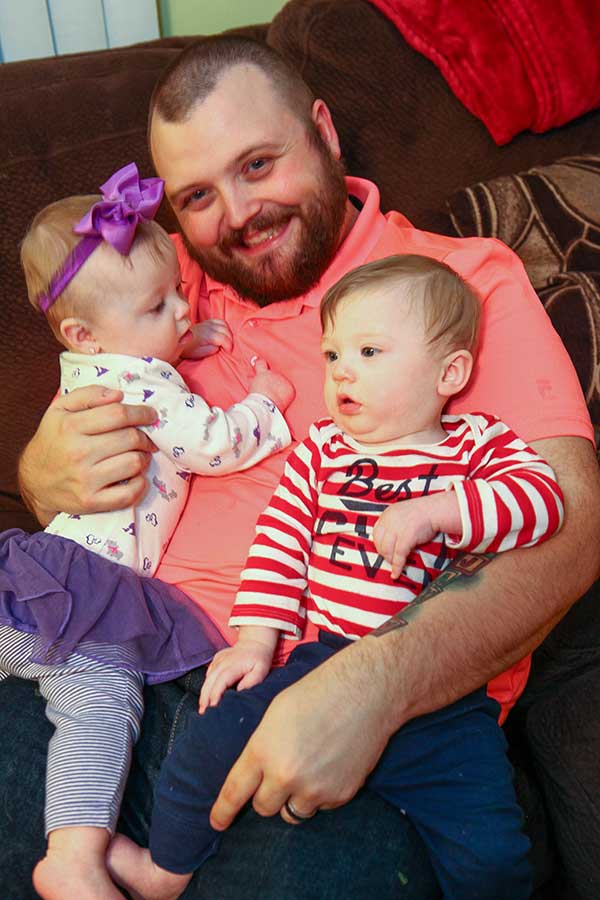 She knows now that both partners need ways to cope with the reversals that are part of fertility treatment. Nicole was able to connect with another mother through CNY Fertility.

“It was great to share thoughts with someone else who was experiencing the same thing,” she says. “You have to have somewhere else to turn because you can only rely on each other so much.”

However, Nick adds, fathers do not receive much support for infertility issues. “From a guy’s perspective, you have to have at least a friend you can confide in. Someone who they can really open up to and say, ‘This is what we’re going through.’”

Despite their struggles, they are in a better place as a couple today. “I believe we are great communicators, and we try to understand each other’s emotions,” Nicole says.

In talking about the issue of infertility, Nicole wants to educate others about how to be sensitive toward people who are suffering. “You shouldn’t say things like, ‘Just relax.’ Or ‘It will happen when you least expect it,’” she says. “Those are exactly the things you don’t want to hear.”

Since the April 24, 2017, birth of the twins, the Gateses have grown to relish being a family of five. And Jaxson, now age 3, has settled into his role as a big brother.

“Having infertility, there’s always a question as to whether or not you are actually going to end up with children at all, let alone multiples,” Nicole says. “It’s a blessing to have one, let alone three. And it was even better to get one boy and girl.”

The woman’s egg supply is boosted using a follicle-stimulating hormone. This is given through daily injections for up to 12 days, enabling the ovaries to release more than one egg for collection.

A day or so prior to the removal of her eggs, the woman will have another hormone injection that increases the chance of the eggs accepting the sperm.

The eggs are collected using ultrasound-guided imaging. The woman is sedated during this procedure, which typically takes less than 30 minutes. The woman is also given more hormones to help prepare the uterus for implantation. At the same appointment, the male partner is asked to provide a sperm sample.

The sperm is separated and “washed.” The eggs are mixed with a partner’s, or a donor’s, sperm in a lab.  If the procedure is successful, the eggs will be fertilized within 24 hours. In some cases, individual eggs are injected with the sperm to increase the chance of fertilization.

After fertilization, the eggs grow in the lab for several days before implantation into the womb. Generally, the healthiest one or two embryos are selected for transfer.

A catheter is used to transfer the embryos through the vagina and into the womb. Sedation is usually not necessary.

Mindful Merrymaking: Eat, drink and move healthy over the holidays
Danger Ahead! What to tell our kids about the hazards of life
To Top