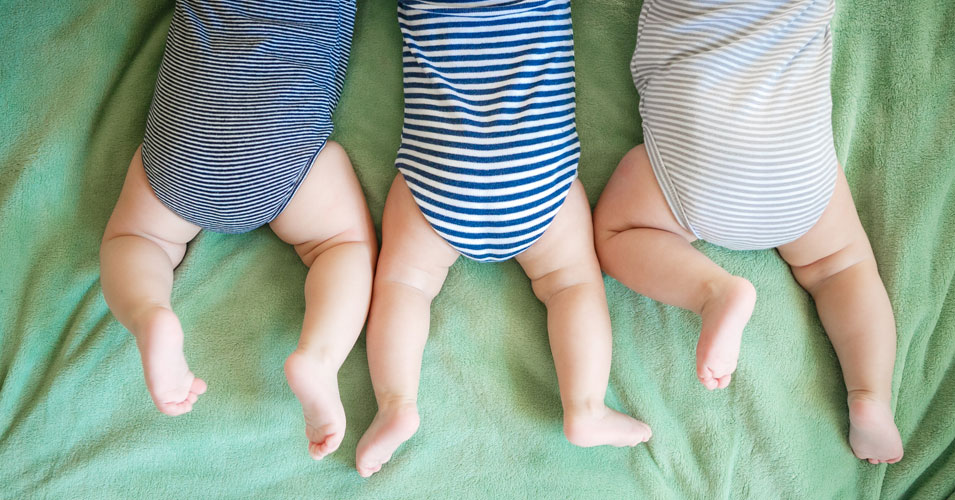 “Boy, your hands must be full.” For the first few months after the birth of our triplets, that’s how we were greeted by folks we ran into everywhere.

“Boy, your hands must be full.”

For the first few months after the birth of our triplets, that’s how we were greeted by folks we ran into at the doctor, the store, or while we were out for neighborhood walks. We had survived a three-month NICU stay at Crouse Hospital, when the babies were born at 28 weeks. The last of the three, firecracker Gretchen, came home on a gloomy July 4 in 2007.

My husband and I, with the triplets being our only children, thought ALL moms and dads were this busy.

Today, we know that’s not true, but it was something we kept reminding ourselves at the time: that all new parents are busy.

How do I describe the first few weeks at home? I’m actually struggling with this because it was a blur. Here’s what I can come up with: It was total and complete exhaustion, while having to operate on auto pilot, all while remaining as calm as possible to care for intense triplet needs.

Yet even that doesn’t do it justice.

So I asked my husband what he remembered and he said he recalled our doctor at the time telling him to “feed Olena more” because she wouldn’t stop crying, and watching some incredible soccer goal scored while he was at home with her.

Mind you, he only remembers Olena being home. She was the last born yet the first triplet released from the hospital to our care. (With triplets they usually stagger the going home so you aren’t overwhelmed. But, oh, how you will be!)

On top of the typical mom-and-dad duties anyone has with newborns, we had additional obstacles to overcome. For instance, Gretchen had her days and nights mixed up: She would be asleep during the day, and then ready to party from 8 p.m. until 4 a.m., while the other two slept.

Theodore was home on oxygen therapy and a sleep apnea monitor, which required a whole new level of skills for us to master. Plus, he had a portable oxygen tank that had to travel with him—everywhere. Because he was hooked up to such a large unit, we camped on the first floor of our two-story home so we didn’t have to lug it up and down the stairs. And he had to see a pediatric pulmonologist.

Olena was jaundiced and needed to be monitored by a pediatric gastroenterology specialist. Constantly. She also had colic and sometimes could only be soothed by being strapped to an adult and walked around.

Then, when she was about 8 months old, she developed a knack for coming down with croup almost instantly. Her symptoms would come on so abruptly that she required more than one ride in an ambulance to the emergency room. With that always came a visit to the ear nose and throat specialist at Upstate (now called Upstate Golisano Children’s Hospital).

What’s more, all three needed to take medication to deal with acid reflux. And they all had follow-up appointments with the pediatric optometrist, who monitored them for premature retinopathy. This was in addition to the usual well-child checks with their pediatrician.

Because they were so small, the triplets were also monitored by a nurse from the Madison County Department of Health to make sure they were growing at an appropriate rate. These regular appointments were a lifesaver; she brought us peace of mind and comfort, letting us know that we were doing all the right things.

Later, when summer gave way to fall, she returned monthly to administer vaccinations to prevent the babies from contracting respiratory syncytial virus, otherwise known as RSV. This led to us being quarantined for the triplets’ first and second winters.

So, yes, we both were overwhelmed. Being surrounded by newborns all day long could be very isolating. However, we also found our family, friends and our community came together for us.

We had family members come out to help: Rob’s mom and his cousin traveled in from New Jersey to see the kids and visit with us (OK, to see the kids). We had my family come from Utica for the day, and pitch in to do overnights. Former coworkers would come over to share pizza and a salad.

And friends turned into virtual family members. Sometimes a friend would be holding Olena when she’d sleep all night long under the person’s chin.

Time and again, people I’d known for only a few years would stop by to say hi and do what they could. Some acquaintances even brought total strangers along, and those people have since become friends.

There were plenty of chores and tasks to accomplish. These folks were ready and willing to step in to support us any way that they could. Plus, the “baby volunteers,” as they were known in our house, were valuable sources of information, who would calm me when I was feeling most overwhelmed.

I’m not sure if they ever knew what an impact they had on me in those early days. Certainly, they were way more useful than any written baby guide.

Then again, with our start, there was no way we’d ever fit into the cookie-cutter milestone and growth charts. And I was all too happy to let go of those charts!

I really don’t know how we did it. But we did. We did it because we believed in each other, in our triplets, and in better days to come.

So, when someone would say to me, “Your hands must be full,” I would feel a smile spread across my face, and, at times, tears would fill my eyes. I could have easily broken down and talked about all the worries, the exhaustion and the appointments.

Instead, I would happily reply, “Yes, my hands are full.” And then I’d wait a beat and add, “But better full than empty.”

And that is the truth.

Fur Babies: Can you compare pet ownership to parenting?
Getting Off ‘The Plateau’: What motivates a child’s growth?
To Top