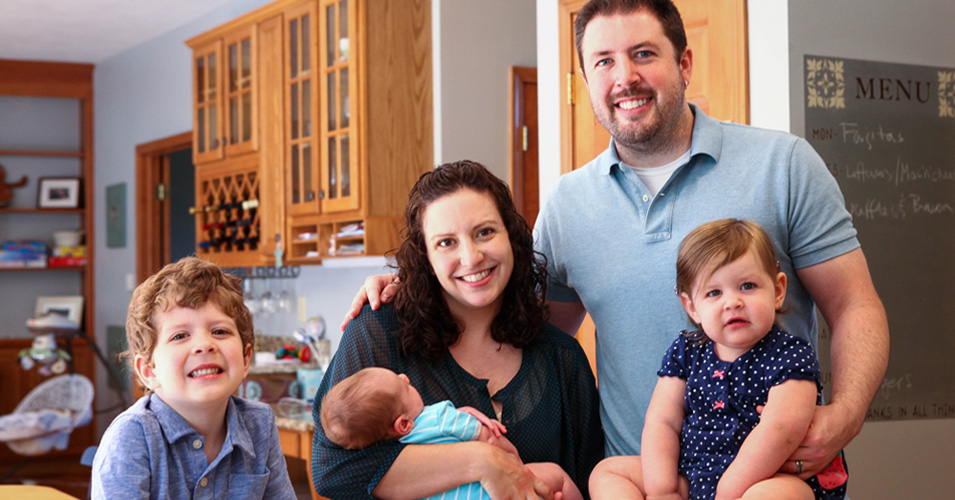 Getting a full night’s sleep with a newborn baby in the house may seem like a faraway dream, but experts suggest ways to help your baby nod off.

Matthew O’Connor, a pediatrician and neonatologist at St. Joseph’s Hospital Health Center, has, with his wife, Susan, had plenty of practice trying to get babies to sleep. Their children are Jack, 4, Liam, born in June, and Olivia, 20 months. (Michael Davis/Family Times Magazine)
Share
Tweet
Share
Share
Email
Comments

Jessica Luisi makes it sound so easy: Her son, Lennon, now 14 months old, was a great sleeper from Day One, affording his parents plenty of rest as well.

The Auburn family maintained a schedule. Lennon might wake up due to teething or bad dreams, but he learned how to soothe himself back to sleep after a few minutes. There were rare occasions when Mom and Dad had to help get him to fall asleep again in the middle of the night, but they never rushed right in.

By the time he turned 1, Lennon’s typical weekday sleep schedule was 7 p.m. until 8 a.m. On weekends, he sleeps until 10:30 a.m. Most afternoons, he takes a half-hour nap. The biggest challenge is keeping him awake during car rides so unplanned sleep doesn’t disrupt the routine.

“We might have to blare music,” Luisi says, “and sing along to keep him from falling asleep.”

But many other parents are singing the blues when it comes to establishing sleep schedules for their infant children. While every child falls asleep and stays asleep in different ways, the good news is the list of proven methods for establishing sleep routines is short and easy to follow.

Matthew O’Connor, a pediatrician and neonatologist at St. Joseph’s Hospital Health Center in Syracuse, has helped hundreds of young children maintain healthy sleep habits, including his own: Jack, 4; Olivia, 20 months; and Liam, who was born in June.

“The biggest thing is, every kid is different,” O’Connor says. “There are dozens of books about training and teaching sleep. There really is no one method. This is not something we can generalize.”

While it is recommended that parents feed the infant before bedtime, it is not recommended to feed her when she wakes up, at least not until the expected sleep time has ended. It is OK to break from that routine during the baby’s first one or two months, but beyond that she will think food is a guaranteed reward for waking up, O’Connor says.

Also, the baby does not understand the day/night cycle during his first six to eight weeks. He can’t yet understand the rhythm or patterns to establish sleep, so it’s unrealistic at that point to believe he will do most of his sleeping at night. Within four months to six months, O’Connor says, the baby should be taking on sleep patterns that are more adult-like.

“Some will do it naturally, but with others you will have to help them develop those skills,” he says.

O’Connor offers two methods: “cry it out” or “gradual extinction.”

Cry it out, of course, means let the infant continue crying until she falls asleep. With gradual extinction, the crying time is limited to five or so minutes the first night, and then increases to 10 minutes the following night and so forth until the infant is able to soothe herself to sleep.

“It depends on your comfort level,” O’Connor says of the two choices. “But be consistent with whatever method you choose. Don’t switch methods.”

The pediatrician reminds parents of the “4-S” rule at bedtime: swaddling the baby in a blanket for comfort and security; shushing the baby to quiet him; swinging, or rocking, the baby to sleep; and sucking, or feeding the baby, whether breastfeeding or bottle feeding. Again, this applies to putting the infant down for sleep, not for when he wakes up.

He also advises parents not to be too rigid with the schedule. While routine is a good thing, a consistent 7:30 p.m. bedtime, for example, might be unrealistic.

O’Connor cautions that with low-birth-weight babies, which was the case for one of his own children, there are instances where you may need to wake the child up every three hours for feedings. His advice to parents: Get as much sleep as you possibly can. If you can’t follow the clichéd “sleep when they sleep,” then ask friends or relatives to help. 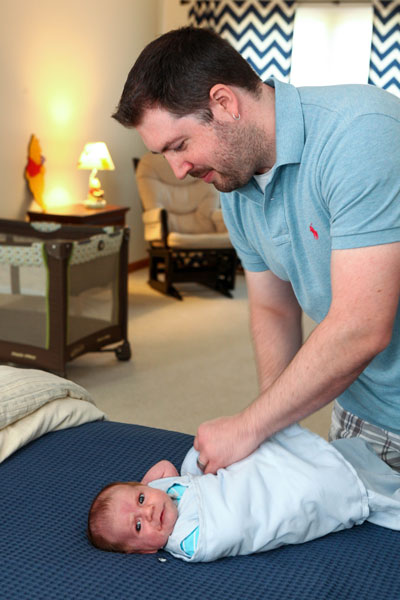 Matthew O’Connor demonstrates one of the methods for helping a newborn sleep: swaddling. MICHAEL DAVIS PHOTO

“If Mom is well rested,” he says, “she is doing a better job in the long term.”

Getting Mom a good night’s rest is not always easy in a single-parent household, or if Dad’s work schedule prevents him from helping out more. Not everyone has extended family in the area or friends who have the ability to help. It’s not unusual these days for new parents to hire a helping hand.

CNY Doula Connection offers birthing and postpartum care services. The organization also provides free seminars on a variety of topics the second Monday of each month at CNY Healing Arts in Syracuse. (Its topic for the July meeting was sleep strategies for the first three months of an infant’s life.)

“People take classes before the birth, which is great, but when they get home they are clueless because the experience can be overwhelming,” says Christine Herrera, a certified doula with CNY Doula Connection. “It is 24-hour care, and you’re not used to that. We put a lot of stress on our moms. People need to remember to look for help.”

Zafer Soultan, M.D., a pediatric sleep specialist affiliated with Upstate University Hospital in Syracuse, says a common mistake parents make is to wake their baby up when the child is twitching, jerking or even breathing somewhat irregularly.

Soultan has met parents who blow on the baby’s face or shake her when they witness those movements. He advises them to let the baby sleep, and educates them about real sleep anomalies, which are rare but should certainly be taken seriously. If the baby is turning blue or other colors when she sleeps, that’s a reason to wake her up.

Children with low birth weight or who were born premature present unique challenges to parents in that they need to adjust to a totally different environment when they get home. They go from hospital units with more lights, more noise and more chaos to a quiet, dark bedroom.

“They can adjust,” Soultan says, “but you have to give them time to learn.”

After three months, infants should start learning how to soothe themselves to sleep. After the baby reaches the six-month mark, parents should put the baby to sleep while he is still awake. At that point, the expectation is the child should sleep for five to six hours before he wakes up.

There are cases where colic, acid reflux or ear infections are to blame for the infant’s inability to sleep. But 99 percent of the time, Soultan says, the problem is that the parents have not allowed the baby to soothe herself to sleep. To aid in that process, parents need to cut back on rocking the child to sleep and instead give her a pacifier or a piece of clothing that has Mom’s scent.

“We need to help them understand that we have the parents start the process themselves,” he says.

Martin and Jennifer Wong, of Cazenovia, had a long break from interrupted nights between their firstborn, Oliva, in 2006, and their second child, Asher Curtis, in January of this year. While the Wongs stopped short of likening infant sleep training skills to riding a bike—something you never forget—they did say they braced themselves for a sleep-deprivation blow that never came.

From previous experience, the Wongs’ patented snuggly-rocking-chair routine was cleared to run past the 8 o’clock hour as it did a decade prior. They were pleasantly surprised that Asher Curtis, when he hit the 5-month mark, decided to fall asleep on his own.

“We were mentally geared up for longer nights,” Jennifer Wong says. “It hasn’t been a walk in the park, but it definitely hasn’t been as tough as we thought it would be!”

Here are some recent recommendations from the American Academy of Pediatrics to prevent SIDS (sudden infant death syndrome):