Anh Minh Verity was about 7 the first time she tried to fast for an entire day during Ramadan. “Everyone else in my house was doing it and I felt a little left out,” she said. “I felt a little guilty so I wanted to do it, too. I failed halfway through.”

Anh Minh, 11, isn’t yet expected to refrain from eating during the holy month of Ramadan. But as the youngest of three children in a Muslim family in Syracuse, she knows that Ramadan is a time to celebrate her faith and appreciate her blessings.

“She’s not obligated to fast until puberty,” said her mother, Naima Barbour. “She understands it’s important to pray. It’s not a vacation.”

Ramadan will be observed in the United States from May 27 through June 25. The monthlong observance falls during the ninth month of the Islamic calendar. It commemorates the time of the Islamic calendar when Muslims believe the prophet Muhammad received the Quran (the Muslim holy book) through the angel Gabriel in the seventh century.

During Ramadan, the estimated 1 billion Muslims worldwide abstain from food, drink or sensual pleasures from dawn to sunset. (Only those who are healthy are expected to fast.) The Pew Research Center estimates there are about 3.3 million Muslims in the United States — about 1 percent of the U.S. population. During the holy month, Muslims also read the Quran and practice acts of charity. One of Islam’s two major holidays, Eid al-Fitr, marks the end of Ramadan.

Barbour and her husband, Jamal Verity, have three daughters, who are home-schooled. Nina, the middle child, will attend Onondaga Community College in the fall and is looking for a summer job. The oldest, Raadiyah, attends the University of Maryland.

Barbour, who is the office manager at Rahma Clinic in Syracuse, said she’s been fasting for so many years she looks forward to Ramadan. Her husband, who teaches computer science at Morrisville State College, converted to Islam as a college student. “Summers are a challenge,” Verity said. “You’re fasting all day, and when it’s six o’clock you still have three hours until sunset.”

The family described some of their Ramadan traditions during an interview in their home. They prepare for the fast with a pre-dawn meal called suhoor. As soon as the sun sets and before evening prayer, “we break the fast,” Barbour said. “Any Muslim family around the world will break the fast with dates and water.”

Dates were a favorite of the prophet Muhammad. “It’s a complete food,” she said. “It replaces what you lost during the day while you were fasting.”

Her husband added, “We put a twist on it and add cream cheese.”

“It’s an act of worship. It puts us in touch with ourselves and the rest of the world. We’re glad at the end of the day that we have family.” — Naima Barbour

If the family is home, they’ll have a typical meal. “I try to make it celebratory,” Barbour said. “I want to put everyone in a reflective mood.”

If they’re at the mosque, the after-prayer meal typically reflects the ethnicity of the evening’s hosts: kebabs, samosas, curry, for example.

Like her younger sister, Nina Verity tried—and failed—to fast a whole day at age 7 or 8. But since turning 13 or so, the annual practice has become easier. She confessed she’s not fond of dates, preferring to eat other fruit to break the fast.

She especially appreciates the first sip of water after fasting. “It’s so good,” she said. “It feels good. It’s like you can feel it more.”

That’s the point, her mother said. “We are fasting and feel hungry,” she said. “There are conflicts and droughts and floods. There are lots of conditions when you don’t have the option to eat. It’s important to be mindful in your eating and your fasting.”

Because Nina and her sisters were taught at home, they didn’t have to explain to their classmates why they weren’t eating lunch during Ramadan. If anyone asks, Nina Verity says fasting “is part of my faith and it’s something we’re told to observe.” Ramadan “is a nice month for reflecting on yourself and looking for change in yourself.”

Fasting during Ramadan is one of the Five Pillars of Islam. “We were commanded to do so,” Barbour said. “It’s an act of worship. It puts us in touch with ourselves and the rest of the world. We’re glad at the end of the day that we have family.”

Other Ramadan traditions include reading the entire Quran during the month, spending additional time in prayer and performing acts of charity and service to people in need. “People are much more active, much more generous,” Barbour said. “I tell the girls to think about what they’re eating and the things they take for granted. Then think about someone around the city or around the country or around the world who doesn’t have those things. We have to be mindful of others.”

Most mosques invite people to iftar, the meal after sunset. “It’s a way to understand what the religion is about,” Jamal Verity said. “It’s good to break bread outside your comfort zone.”

Some Muslims stay at the mosque for hours after iftar for extra prayers. Some believers stay overnight at the mosque, praying, during the last 10 days of Ramadan, when it is said the Quran was revealed to the prophet Muhammad. It is a get-together, Verity said. “People drink coffee and tea and talk and get blessings.”

Barbour advises the youth group at the Islamic Society of Central New York. She organizes activities, such as visiting a park or beach, about once a week for kids who are not fasting. “We try to keep them occupied and teach them about Islam.”

The Islamic Society also hosts special events for teens. Nina Verity has participated in poetry readings, get-togethers and sleepovers at the mosque.

The real celebration comes at the end of Ramadan, with the three-day Eid al-Fitr celebration. “We try to do gifts,” said Jamal Verity, who was brought up Catholic. Anh Minh and Nina remember getting dolls and other toys on Eid al-Fitr. The holiday involves special meals and visits with families and friends. People also congratulate each other on completing the Ramadan fast. “There’s a sense of accomplishment.”

Muslims don’t make a big deal out of fasting, Barbour said. “It’s a part of Islam. Kids learn that pretty early.” If people do ask why they’re not eating, it’s the perfect opening to talk about their faith, she said. Those who follow other faith traditions, including Judaism and Christianity, also fast at certain times for similar reasons, she noted.

When Ramadan falls during the summer, some people may find it difficult to fast throughout the long, hot days. Nina Verity, for example, plans to take a hiatus from roller derby league this month.

But for the most part, Muslim families simply carry on with their lives. “They’re working. They’re going to school. They’re taking care of their families,” Barbour said. “Life doesn’t stop because it’s Ramadan and you’re fasting. It might go a little slower.” 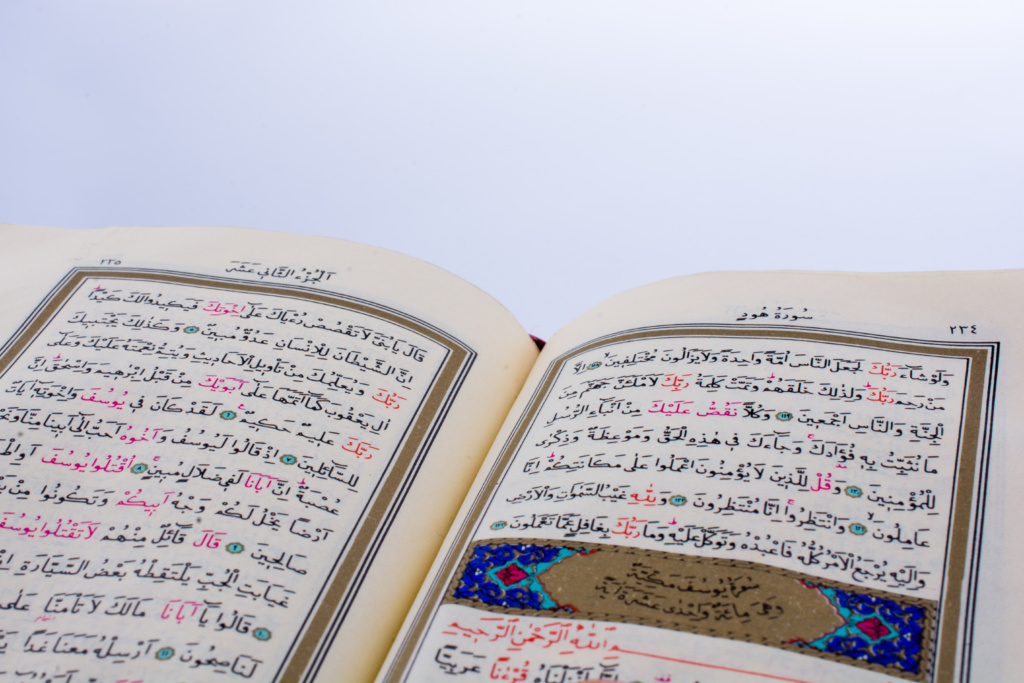 The Five Pillars of Islam: The Muslim declaration of faith, daily prayer, charity (zakat), fasting during Ramadan, and performing the hajj pilgrimage in Mecca.

Major teachings: Islam believes in one god who is the creator of all. It is one of the three major monotheistic religions, along with Christianity and Judaism. Muslims, like Christians and Jews, believe in God’s revelation, prophets, ethical and moral accountability and a day of judgment. They revere Adam, Abraham, Noah, Moses, David and Jesus as prophets but believe that Muhammad was God’s final and most important prophet and messenger.

Sacred texts: Muslims believe the Quran was dictated to Muhammad by the Angel Gabriel. The Quran is considered to be the exact words of God, rather than the words of Muhammad. Muslim practice is also defined by the Sunnah—the sayings, practices and customs of Muhammad. His sayings are known as the hadith.

Allah: Allah is literally the Arabic word for God Almighty. In the Quran, Allah is given 99 names, including king, protector, compeller, sustainer, exalter, the forgiving, and judge.

Mothers deserve cheesecake! It’s the least you can do for the moms in your life
Introducing Riff Rockit: Kindie artist to play jingles at Leon Fest
To Top