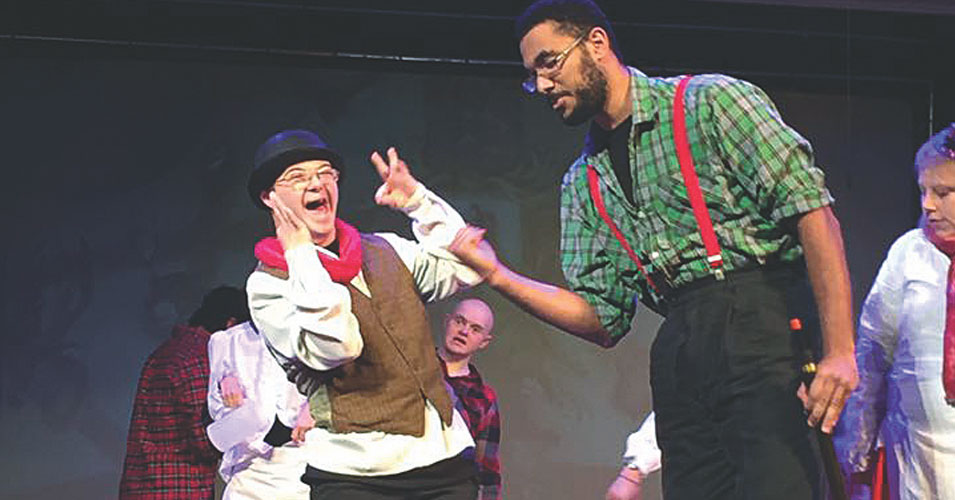 Nonprofit Front Row Players began as an outlet for one local mom’s daughter, but has blossomed to help people with special needs throughout the community.

Exactly one year ago I faced a dilemma. My daughter, Amanda, had participated in a community theater program for years but because she was turning 18, she was about to “graduate.” This graduation was going to leave a great, big hole in her life.

Her best friend, Ellie Knodel, had graduated the year before and was already experiencing this emptiness.

Amanda and Ellie have special needs. Their challenges do not diminish by one iota their passion for performance. But opportunities to take part meaningfully in professional productions are very difficult to find.

Adults with special needs as a community often struggle to find productive ways to spend their time. When they are younger, activities provided by schools or programs are accessible and often utilized. Once they “age out” of the public school system, the onus falls on families and caregivers to fill their day, to assist their adult in crafting a life.

I wondered: Wouldn’t it be great if there were a musical theater program for adults of all abilities? A place that would teach, on a consistent basis, the skills needed, such as acting, movement, rhythm and voice. Wouldn’t it be wonderful if these adults had the real possibility of landing a lead role or a solo? And wouldn’t it be in the true spirit of art if the success of the performance was judged not by the perfect recitation of lines or the matching of pitch, but by the connection felt between actors and audience?

And so the idea for Front Row Players was formed.

I wondered: Wouldn’t it be great if there were a musical theater program for adults of all abilities?

We needed a space that was universally accessible, with a stage, seating and enough room to rehearse dance numbers. Eastern Hills Bible Church, in Manlius, welcomed Front Row Players with open arms.

Next step: Find the right team to work with a unique group of actors.

Front Row Players is focused on growth in performance, confidence and stage ability. These instructors had to find the talent that was in each actor and bring it forth, and they had to be able to work cohesively to make the first show successful.

Each of our professionals came to us by referral and each is a perfect fit.

Christopher Rogers, the director, is an administrator with Onondaga Cortland Madison (OCM) BOCES. He used to direct musical and dramatic productions for high school and middle school students. With the Front Row group, he got a chance to again work one on one with students.

Shannon Tompkins, assistant director and choreographer, has been teaching dance since she was in high school. She choreographs locally at high schools and community theaters and works as a teaching assistant for students with special needs in the Syracuse City School District.

Kay Paulsen, our music director, has a doctorate in voice performance and pedagogy and more than 40 years’ experience as a professional singer and primary and post-secondary music teacher.

I knew we also needed a business manager, who would remember to submit state paperwork, get printing done, coordinate fundraising, and keep everyone organized. I found Christine Byrnes, who has assisted other nonprofit organizations in the Syracuse area and also has a daughter with special needs.

Now we needed our actors.

We wanted a group that loved musical theater and would be committed to rehearsals. Working with local Medicaid service coordinators and word of mouth, we found 13 devoted adults.

Starting in September and rehearsing all the way through November, our team of actors and professionals worked on a selection of songs and scenes from various musicals.

Adjustments were made along the way. At first, we planned on 10 numbers but then realized that with limited rehearsal time, five was a better.

We found our actors were able to give more character and feeling to scenes and songs if they were allowed to sing along with the original track instead of performing with accompaniment. We adjusted our music.

We worked on a selection of songs and scenes from Guys and Dolls, High School Musical, The Sound of Music and more. Parts and solos were assigned based on enthusiasm, ability and fairness. All actors were given time in the spotlight.

Every Saturday morning at 9 a.m. our troupe would walk through the doors at Eastern Hills ready to go. They fearlessly learned their parts, unquestioningly worked on their dance moves and excitedly donned any costume piece we handed them.

They also learned to collaborate with their fellow thespians, step out of their comfort zones and grow in confidence.

As Lori Gonzalez, an actor, said, “Our instructors treat us like any other person. They don’t look at us as having a disability. They treat us like what is ‘normal.’”

Amanda’s friend Ellie had surgery mid-semester. She missed two weeks of rehearsals and, quite rightfully, her mother, Cindy Knodel, was concerned for her safety and comfort. When Cindy asked if she felt ready to return, Ellie replied, “Mom, Front Row Players is letting me live my dream.”

After 14 rehearsals, our show was ready to go! We had more than 250 in the audience for our end-of-semester cabaret. When it was over, the one word repeated over and over — in emails, posts to Facebook and to me personally — was “joy.”

I started out hoping to create a program that would fill a void in the lives of my daughter and her best friend. With help and guidance, Front Row Players has become a registered nonprofit organization. I learned that an idea for good will catch fire with good people. I have been amazed by the help and contributions from the most unexpected places.

Front Row Players’ goal was never to strive for “perfection,” and yet, anyone who attended the show will tell you it was: perfectly wonderful.

On the spectrum: What autism spectrum disorder is like for families
Moving On: A parent’s reflections on high school graduation
To Top