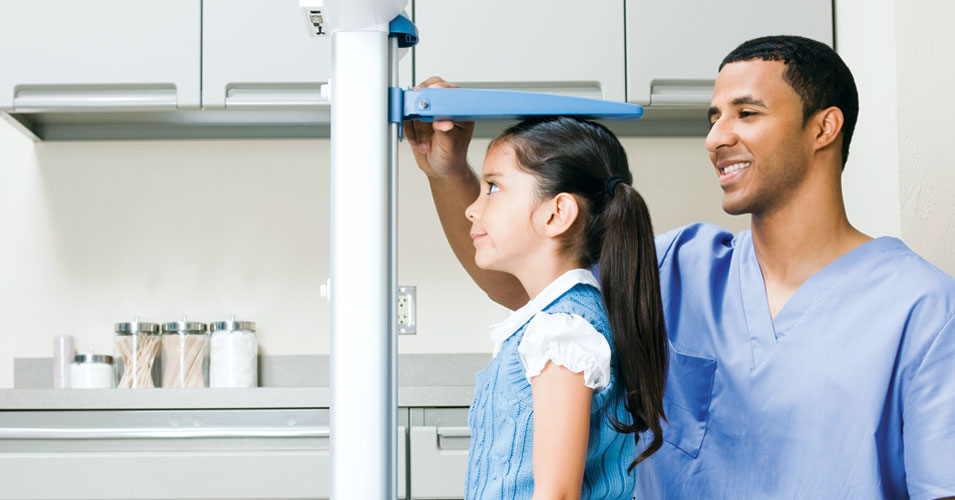 From the time children are born until they are buying their own clothes, parents spend a lot of time thinking about their growth. Babies tend to go through steady periods of growth that are closely linked to their nutritional intake. These patterns are studied very closely by their pediatricians. As children reach puberty, the growth patterns are far less typical, and can be (literally) painful. With teen boys growing as much as five inches in a single year, it can sometimes feel like more like a metamorphosis than a gentle transition.

Robert Dracker, M.D., medical director for Summerwood Pediatrics—with offices in Liverpool and Camillus—has been addressing parent concerns about growth spurts and growing pains since he opened his practice in 1993. (This interview has been edited and condensed.)

Family Times:  Parents of infants are often very concerned about their babies hitting certain growth milestones. Should they be?

Robert Dracker: I think the main priority is that children are gaining weight at the proper pace. If the child is gaining weight accordingly, generally speaking the length and the height progresses. The nutritional status of the child will reflect in their growth. Poor nutrition will show itself in the growth curve. If there is a pattern of poor nutrition, the weight will drop, then the length will start slowing down. Eventually, head circumference will be affected. You can see those fluctuations, and that’s one of the reasons why we see babies so frequently.

A single drop in weight gain is not something to be worried about. But a trend is something we would want to help the parent change. We don’t see problems very often in our practice, but we generally try to help parents address those kinds of issues quickly.

FT:  What is happening within the body when a child has a growth spurt?

RD:  Children grow at regular rates . . . about a couple of inches per year. They’re not growth spurts in younger children. Some children will have more accelerated rates of growth than others. And those rates may come at different times for different children.

When children hit adolescence, there are some general trends. There may be height gains of several inches in one year, and less in others. In addition to the growth in height, boys tend to put on weight right before puberty, whereas girls tend to do it after they go through puberty—in preparation for their childbearing years.

FT:  What can a child’s growth patterns tell us about how tall they will eventually be?

RD:  You can’t predict that—not accurately. So much has to do with quality and quantity of nutrition; that’s the most critical thing parents can do for their children. Hereditary factors come into it.

FT:  Toddlers are very active and they are growing so much but are often rather picky eaters. What can parents do to ensure their little ones have the nutritional support they need for proper growth and development?

RD:  I sometimes have parents add Carnation Instant Breakfast to milk or give them something like PediaSure. Breastfeedng infants usually start to slow down on the nursing just before the one-year mark. So, we have discussions about adding whole milk and supplements; then a multivitamin supplement for older children.

We find the same kinds of issues when kids get older. They are busy, they are playing sports, and they’re eating. In fact, their parents say they are eating noticeably more—but they’re not always getting the right kind of nutrition. Some even lose weight, and this can alarm their parents. I tell the kids all the time, “You need to get the good calories.”

FT:  As children get older, there is more talk of “growing pains.” Medically, what is actually causing these pains?

RD:  It varies a lot. Teens grow an average of three and a half to five inches during their preteen and teen years. The growth plates in the legs are meant to allow the long bones in the legs to grow until adulthood. But the cartilage can become inflamed. Usually these pains are nothing to be concerned about. They can be treated with an over-the-counter pain reliever. But these pains should always be checked out if they are interfering with a child’s regular activities.

There are conditions that can add to a child’s pain. Chondromalacia patellae is when the kneecap becomes irritated from overuse. Or  Osgood-Schlatter, a condition of the growth plates in the long bones of the legs that causes an actual lump, or ridge, of tissue to form under the kneecap.

FT:  Are these kinds of orthopedic conditions in teens and preteens becoming more common?

RD:  No. it’s always been that way. I don’t think it’s really changed. We regularly check for them. Sometimes, you can see the signs of a problem just by looking at the knees. Generally, these conditions can be treated easily. Kids can reduce their activity, or use ice after sports.

FT:  The combination of rapid growth and excessive sports seems to be an unhealthy one for teens. What do you recommend to your patients?

RD:  Yes, the increased performance expectations can be contributing to these kinds of injuries. Parents want to make sure their children are not suffering from overuse. We see kids who are playing multiple sports, and often on more than one team in these sports. That can be too much.

FT:  Can this stress on the growth plates during teens’ final growing years cause permanent damage?

RD:  There is the potential for long-term damage with these conditions, absolutely. Children sometimes need to see an orthopedist for treatment.

FT:  When should parents be concerned about slow growth with their teens?

RD:  Things usually work out in time. There is no real time limit, but if symptoms persist or are progressive in nature, then we do more exploring. Beyond the nutritional and general health factors, we look at genetics. We may recommend hormone testing. Any symptom that is becoming worrisome, we check into it.