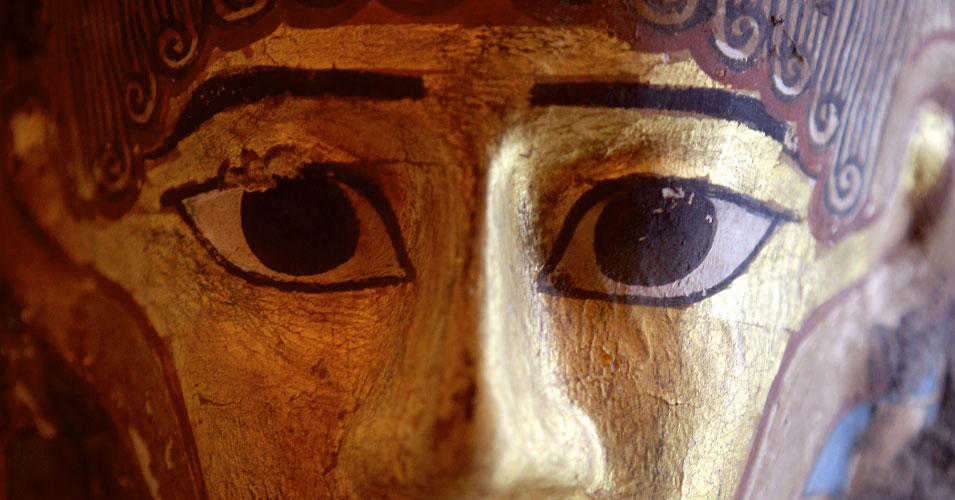 I can’t believe how many times I’ve driven through Cazenovia, usually on my way to Critz Farms at Halloween time, and not stopped to check out the other gems of this fair town.

It turns out the public library houses a real mummy and the art park offers more than a hundred acres to explore and visit works of art. And, of course, there’s the lake. Good thing I finally pulled the car over.

Consider taking the kids to Cazenovia for a close-to-home day trip. Start at the library, located right on Albany Street, the main thoroughfare in town. There’s plenty of free parking behind the library, which offers an easy byway to Albany Street for shoppers and diners as well.

Small children won’t want to miss the fairy garden located outside the library’s doors. Once inside, take the stairs or elevator up to the restored Greek revival home’s ground floor, where the books and museum await. A gallery filled with artwork leads to the museum.

Here, one recent day near the end of summer, three local children were working on a puzzle at one of the study tables. They love the mummy and the artifacts of their town on display in the museum.

“I like that it’s part renovated museum and library,” says Cavy Monahan, 13, of her hometown library. “It’s really cool to be able to get books and to come up here.”

Her brother Torin, 12, notes: “I enjoy all the artifacts and that they have all these articles about old Cazenovia.”

Library director Betsy Kennedy says that “children having the opportunity to see artwork” is very important because some children may never get to an art museum. Artwork featuring local people and places “could be a really nice discussion-starter” for caregivers and children, she says, emphasizing the importance of children talking with adults about their environment.

“I like, obviously, that they have the mummy,” says Megan Hughes, of Cazenovia.

The Egyptian artifacts section is in a separate room that houses the mummy of a 25-year-old man, which was collected in 1894 by the library’s benefactor, Robert James Hubbard. A journal of his was recently added to the collection, Kennedy says.

A touch-and-display screen offers videos about the artifacts, which include jewelry, a mask and other household items. Across the way, X-rays of the mummy’s jaw and skull show details of what’s inside.

Two finely appointed, old-fashioned sitting rooms or reading rooms round out the museum area, which also includes Victorian-era clothing and toys, a “cabinet of curiosities” and other items of local historical importance. A new exhibit will debut in October.

The traditional library side of the building features a beautiful space filled with stacks of books, a garden-painted room for reading and children’s storytime hours, and computer stations, all under a two-story ceiling and walls painted in period colors. On school half-days, such as Oct. 9, the library offers special interactive art programs and Legos at the library days, Kennedy says.

When you can drag your kids away, tell them it’s time to check out more art, this time located on rolling hills that they should climb, run or roll down. A little over a half-mile west of Cazenovia’s border, turn north off Route 20 onto Stone Quarry Road, which leads to the Stone Quarry Hill Art Park. Four miles of trails share the hill with more than 100 works of art, some of which are hidden among the trees, while others stand out in the wind. An indoor gallery features temporary exhibits.

Two short trails start from the parking area. See what the kids think of the outdoor wooden library, whose stacks include real books. And the “man,” made of a tree trunk, reading in the grass across the trail. All of the artwork is made to fit in and change with the natural surroundings.

Dogs are also welcome in the park. Open dawn to dusk year-round, the art can be witnessed by humans on snowshoes, cross-country skis or sleds during winter months.

Special events in autumn are the One Sky One World fall kite festival Oct. 11, and Sculptural Scarecrow Making Workshops Oct. 19 through 22.  The park also is included on the Cazenovia Art Trail Oct. 3 and 10 and during the Cazenovia Fall Festival, which takes place in the village of Cazenovia.

As you drive out, don’t forget to wave goodbye to the frolicking horses (or are they zebras?) that dance near the road leading to the park’s exit.

It’s time for lunch or a snack, so head back toward the village. Stop for a slice of pizza at Owahgena Pizza, or pizza and ice cream at Caz Pizza, both local favorites. Dave’s Diner is roomy and offers breakfast and other homemade treats all day, or at least until closing time at 3 p.m. A picnic lunch also could be shared at one of the tables near Cazenovia Lake in Lakeland Park.

Or perhaps you would like to experience some of the fall festivities at Critz Farms, the 325-acre farm located 3 1/2 miles south of Route 20. Critz’s attractions include a giant corn maze, pick-your-own apples and pumpkins, and wagon rides.

If the weather encourages you to head indoors, consider a tour of the mansion at the Lorenzo State Historic Site. Built in 1807, the home was designed for Dutch land agent Colonel John Lincklaen and his family, who helped found the village. Tours are offered Wednesdays through Sundays, 10 a.m. to 4:30 p.m., through Columbus Day. Consider returning for a special Christmastime visit to see the mansion decorated in a Nutcracker ballet theme for the holiday. The 19th-century Rippleton Schoolhouse is also on the grounds, which feature elaborate gardens, and are available for cross-country skiing and snowshoeing in the winter.

During snowy months keep an eye out for the daring ice sailors who skim across the lake when conditions permit. In any weather, head north along the lake to Chittenango Falls State Park, so named for its 167-foot waterfall, and located just four miles north of downtown Cazenovia. The state park is open year-round with a hiking trail that circles the falls, nature trails and a playground.

Heading east from Chittenango Falls, wind turbines seem to grow larger until one reaches the town of Fenner and the FREE (Fenner Renewable Energy Education) Center. Dedicated to teaching the public about wind turbines and renewable energy, the site welcomes visitors who want to take a tour or just picnic beneath the 20 towering turbines, located about 15 minutes from the village of Cazenovia.

Port of Call: Oswego’s attractions include historic boats, a fort and a bookstore
Dig In! Plant bulbs now, get beautiful blooms in spring
To Top