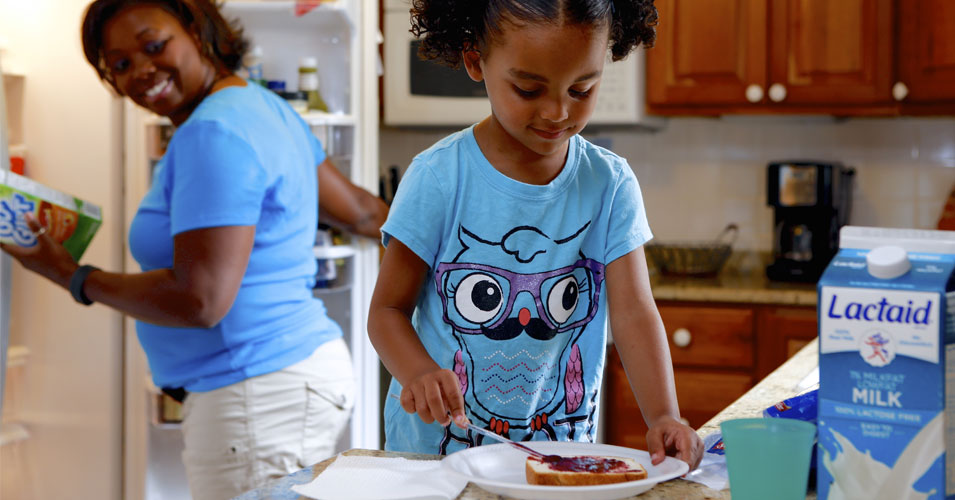 Kye’s first taste of peanut butter was terrifying. His mother, Amanda Staniec, still trembles a bit when she recalls what happened on that day three years ago. The boy, just 1 at the time, tasted the food but did not even swallow it. The very slight exposure made it difficult for him to breathe.

Staniec, not yet aware that her son had any medical issues other than asthma, gave him over-the-counter allergy medicine. Less than an hour later, he broke out in hives.

An ambulance ride from their Brewerton home to the hospital followed. Kye was given a breathing treatment during the transport, was seen at the emergency room and had a short stay at Upstate Golisano Children’s Hospital in Syracuse. He tested positive for three common types of food allergies: peanuts, tree nuts and shellfish.

A major lifestyle change for the entire family followed. They read the labels for everything and always carry epinephrine, a medication given during a severe allergic reaction. For now, Kye avoids going to friends’ houses, and he will delay starting kindergarten for one year so his parents can determine if his body will have milder reactions if he’s exposed to certain foods.

Stories like Kye’s—across the nation and in Central New York—are increasingly common. The Food Allergy Research and Education organization estimates that about 15 million Americans—and one in every 13 children—have food allergies. According to the Centers for Disease Control and Prevention, food allergies in children increased by about 50 percent from 1997 to 2011. Fortunately, the challenges highly allergic children have faced and the lessons learned from them—coupled with changing attitudes toward the issue—have made it easier for parents of newborns to deal with food allergies.

Dr. Juan Sotomayor of Allergy and Asthma Diagnostics in North Syracuse says his practice typically sees two new patients a day who are diagnosed with food allergy, and an allergy to peanuts is by far the most common. By contrast, that figure was one or two patients a week when he began practicing medicine in the early 1990s. Why food allergies are on the rise, he says, shrugging, “is the Nobel Prize question.”

There are many theories: over-immunization; the reduction in measles, mumps and tuberculosis; overuse of antibiotics and antibacterial soaps and other products; urbanization; and changes in the way food is processed.

In June, the Asthma and Allergy Foundation of America released interim guidelines from its LEAP (Learning Early About Peanut Allergy) study that recommend introducing peanut products to infants between the ages of 4 and 11 months. Allergists’ guidelines have fluctuated in recent years, but as recently as 2008 parents were commonly advised to wait until after age 3 to give their child peanut butter if the child was considered high-risk, which applies if they have a parent or sibling with any type of allergy.

The LEAP study, however, found that children who began eating peanut products as infants had a 70 percent to 80 percent lower rate of developing a peanut allergy compared with children who waited until age 5. Only children who were considered high-risk were studied. The study cautioned that those recommendations do not apply to children who are already diagnosed with, or suspected of having, a peanut allergy.

Local allergists embrace these recommendations. Sotomayor says the first dose of a peanut-based product for an infant should be less than a teaspoon of peanut butter on the tip of your finger, and offer the same amount once a day consecutively for about three weeks. He also recommends “peanut doodles” for teething. In addition, he suggests introducing eggs to infants as young as 3 months.

Sotomayor encourages everyone to practice thorough hand washing to avoid the casual spread of food particles that may be allergenic. And he warns allergy sufferers to avoid bakeries, candy stores and Asian restaurants, and to research the ingredients in any barbecue or other types of cooking sauces used in the house.

The Allergy and Asthma Foundation of America, on its “Kids with Food Allergies” website, provides information on introducing solids to infants. It advises that pregnant women who do not have food allergies themselves to not avoid highly allergenic foods. The same goes for women who are breastfeeding.

The foundation recommends breastfeeding mothers consult an allergist, however, if the infant has severe eczema (itchiness and inflammation of the skin) or shows signs of possible food allergies (hives, excessive vomiting, extreme fussiness with most nursing sessions, or coughing or wheezing during feedings). The same recommendation applies if the infant displays any of those symptoms when trying solid foods. And parents should also consult an allergist if the baby has a sibling with food allergies.

The foundation also recommends starting infants on less-allergenic foods, preferably those composed of single ingredients such as rice or oat cereal, yellow and orange vegetables (carrots, squash), green vegetables and fruits. Go slowly: Introduce one food at a time, and wait a few days before introducing another food.

The first highly allergenic food should be in a small quantity (never a full serving). If there is no reaction, gradually increase the quantity over the next several feedings. The website also advises offering nut butters or pastes, not actual nuts, which are a choking hazard.

An allergy is caused when there’s an immune system response to certain proteins in food. The body has an easier time breaking down the proteins in milk, eggs and wheat than it does nuts and shellfish, says Theresa Bingemann of the Allergy and Clinical Immunology department of the Rochester (N.Y.) Regional Health System. She also explained that there is a spectrum of symptoms for most types of food allergies; it’s not always just difficulty breathing, vomiting or rashes. Reactions to certain foods can even include blood in the stool.

Bingemann added that medical researchers are developing a patch that can help people tolerate high doses of the foods they are allergic to. “It’s kind of an exciting time in this field,” she says. “I’m hoping this will come to fruition.”

In the meantime, doctors advise food allergy patients to carry epinephrine in case they have an anaphylactic reaction, which can be fatal. Such reactions can be caused by many types of foods, not just nuts and shellfish. Epinephrine provides a surge of adrenaline to the body very quickly and intensely, and is also used to treat cardiac arrest.

The administration of epinephrine, the common ingredients in brands Epi Pen and Auvi-Q, can be quite traumatic to a youngster. Both products contain long, intimidating needles. Auvi-Q is a spring-loaded device that injects automatically when it’s pressed against the outer thigh. (A set of two costs about $500, but that does not factor in insurance coverage or discounts from the manufacturer.)

Lindsey Stoppacher, of Manlius, participates in day camp programs that educate parents about food allergies, and she’s trained several people on how to properly administer Auvi-Q. She always carries a set for her 12-year-old daughter, Harper, who has peanut allergies. On long plane rides she brings at least six of them, figuring that each one provides about 15 minutes to breathe.

Harper was diagnosed at age 4 ½. Before then, there were no clear signs of allergies, especially since there was no family history of it, although she did have asthma. As a toddler, Harper always rejected peanut butter, but exposure to it from other items in the lunchbox caused her to throw up violently. The severe allergy was confirmed two days before the family flew to Florida.

“Flying on planes, eating in restaurants, explaining the situation and severity of it to relatives who are new to it. …We began a life of strict avoidance,” says Stoppacher, who also has twin 9-year-old daughters.

“Bottom line: It is hard,” she says. “It is scary to have an anaphylactic allergy in your kid. But it is even scarier to give them wings. They have to, bit by bit, in an age-appropriate manner, take part in avoidance/preparedness, so they can live as normally and safely as possible.”

Val Stuart, of Fulton, says her daughter, Alaina, may not have had any exposures to nuts when the girl was diagnosed with the food allergy at 10 months of age. Stuart and her two sons see an allergist for their asthma and seasonal allergies, and she wondered if the doctor had any advice for treating Alaina’s eczema. She figured her daughter might be allergic to milk, but tests confirmed a peanut allergy instead.

Alaina, now 4, is very educated on the subject and asks a lot of questions about foods that she is exposed to, her mother says. Peanut butter is allowed in the house, but any time the jar comes out there must be a thorough washing of the counter, the table and hands. Stuart, an elementary school teacher, says she will work with the Fulton school district to establish plans for Alaina to eat at a nut-free table or, if need be, in the nurse’s office, when she starts kindergarten.

“I am a little concerned about her starting school,” Stuart says. “But I’m sure we can come up with a plan that works.”

Parents and physicians say society as a whole has shown vast improvements in accommodating food allergies. Labels on food boxes are easier to understand and manufacturers are better about disclosing potential cross-contaminations. The label on a store brand of bread, for example, notes that peanut-based products are made in the same factory.

Staniec, the mother of the 4-year-old boy with food allergies, said most of the chain restaurants they visit, including SweetFrog frozen yogurt shop, offer a variety of non-allergenic food choices.

Even NBT Bank Stadium in Syracuse is sensitive to it.

“You hear how baseball goes hand in hand with peanuts and Cracker Jacks—and even this place has a peanut-free zone!” Dr. Sotomayor says. “That’s a good thing. There’s more awareness and more knowledge out there.”

Books About Babies: Reading to an older child helps prepare for a new sibling
Preparing to Potty: Make toilet training easier by learning your child’s signals
To Top