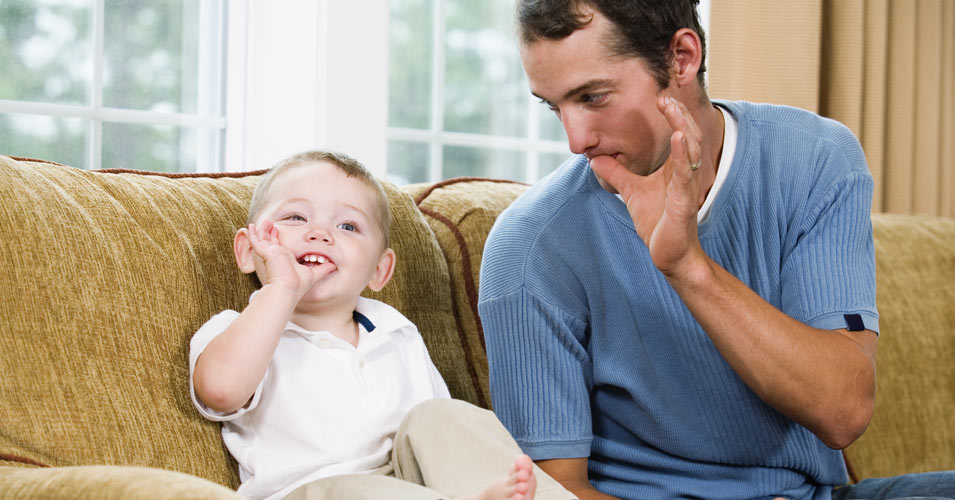 My kindergarten report card stated, “I am not sure little Debbie is aware she is talking half the time she is talking.” I naturally assumed the apple would not fall far from the tree and I would have talkative children. I daydreamed a parenthood experience with baby talk, sing song conversations and hilarious mimicry.

But my first little apple was born with challenges that made it difficult for her to prattle away. Amanda was diagnosed with Down syndrome and airway issues at birth. She had multiple surgeries that damaged her vocal cords. A tracheostomy tube was placed before she was 2 to assist with breathing. The diagnosis, hospitalizations and surgeries limited her ability to build pre-speech skills.

We were told by many specialists that in most cases a baby’s receptive language, or what she comprehends, develops more quickly than her expressive language, what she can say. The gap can cause the child to experience frustration. That frustration can lead to tantrums by kiddo and parents—I’m just saying.

We started exploring alternative communication options. While we fully expected Amanda to speak one day, we felt it necessary to give her the ability to get her point across as soon as possible.

Researchers had discovered that babies could communicate using simple signs and gestures. Amanda was being treated by speech therapists who supported this idea.

And the method has gained traction in recent years. “I feel that it helps a child communicate better, especially when the sign is paired with the verbal word. At a young age, a baby can’t articulate what they need but they can use hand gestures. They also comprehend what is being said to them. Signing gives the ability to link the two together, speech and gesture. It can lessen frustration and helps reduce temper tantrums because the child expresses what they need. A total communication approach bridges the gap,” said Christine Aiello, a speech therapist with Fayetteville-Manlius Schools who has worked with Amanda, in an emailed response to my question.

But back in 1997 teaching babies sign language was controversial.

The late Dr. Stanley Greenspan, author of several books on child development, believed teaching babies to use specific signs and gestures introduced an artificial element into the naturally developing communication system.
“Anytime you do something repetitive with a baby, you’re reducing the flexibility and creativity of the child,” Greenspan told the Baltimore Sun. “I don’t want to say that parents who use sign language are doing something bad or wrong; that only makes the parent feel bad. But why not let your child learn to ask for a drink 30 different ways instead of just using one sign? What if there was only one way to express love? Or one gesture to show love?”

Another concern at the time was that a signing child would not have the motivation to learn to talk and subsequently would begin to speak at a slower rate than those who did not use signs.

My husband, Brian, and I read the pros and cons of introducing sign language. We wanted to know what was going on in the brain of the little person sharing our house. It was obvious to us that Amanda understood what we were saying to her. It was also obvious she had ideas she wanted to convey.  We needed to let them out.

We chose our first sign: “more.” Easy to make the sign, and one we would use many, many times a day.

Sitting Amanda in her high chair, I began by putting one Cheerio on the tray. She of course snarfed it down and looked to me as the tray was empty. “Does Amanda want more?” I asked as I signed “more.” I then placed another Cheerio on her tray. Boom! It disappeared and she was once again looking at me expectantly. “More?” I signed, and away we went.

The first sign sighting was much like the first time you think you see your baby smile. Was it gas? A grimace? So: Did she just sign “more” or did she mean to clap? Swat at a fly? Give herself a high five?

With every sign we said the word or phrase associated with it. The “eureka moment” was much like that scene in The Miracle Worker, in which the young Helen Keller makes the sign for “water.” Once Amanda figured out the link, new signs accumulated quickly.

Amanda even made up a few signs of her own. Her grandmother used to give Amanda a “thumbs up” whenever Amanda did something good or accomplished a task. The sign for her grandma became “thumbs up.”

Eventually, as Amanda’s vocal word bank grew, her sign language usage diminished. It was a natural progression. But we were able to fall back on signing when we couldn’t quite figure out what she was trying to say. This helped us all.

Amanda, age 17, is a verbal speaker now. Every now and then we still use a sign. They actually come in handy. You can be across the room at a party and sign “time to go.” Or let a family member know you have to use the “bathroom” without announcing it for all to hear.

I recently asked Amanda if she remembered one of my favorites, “all done.” She immediately did the same dramatic sign she used when she was 3: hands clapped in front of her and then arms flung out straight and wide at her sides, palms outward, fingers straight as if saying “STOP!” to everyone in the room.

That sign always told us Amanda was finished, and she clearly meant what she said.

Flashes in the Dark: The prospect of fireflies adds magic to summer nights
Ketchup Is Not a Vegetable: Help kids appreciate unadorned foods
To Top