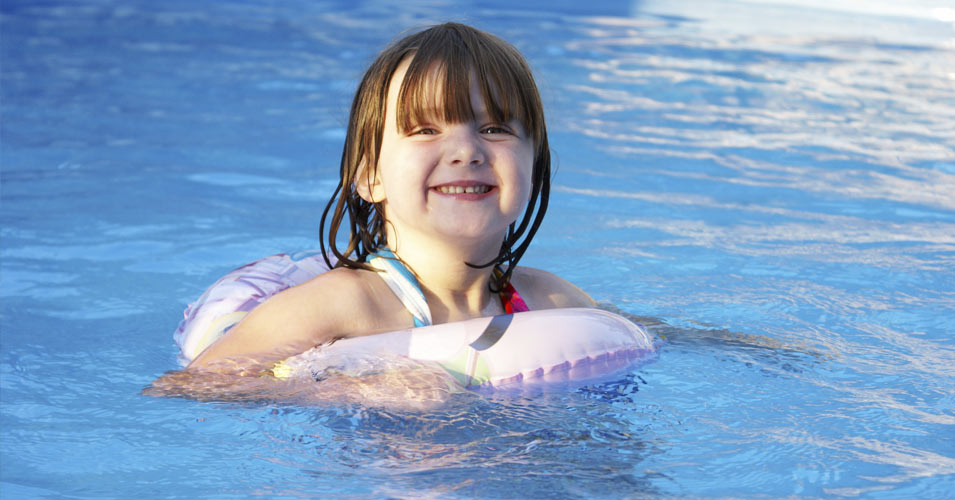 My daughter was always drawn to the water, but for years and years she wasn’t allowed to get her head wet.

When Amanda was 1 ½ years old she had a tracheostomy placed because of vocal cord damage from a surgery. This tube, located in her neck, gave her an airway to comfortably breathe, but it was also a direct path for water to reach her lungs if her neck was submerged.

Simply put, she needed to stay out of water. That was easier said than done. We have a family camp on Lake Ontario. She had many friends with pools. And, as luck would have it, she was one of those kids with a natural love for water.

Our summers became challenging as water time had to include all of us, all the time. We held her in our arms when she was small, swooshing her around so she could experience the feeling of floating and splashing. As she got older, we tried to give her a bit of freedom, letting her stand in water and kick. She could sit with her bottom submerged as long as the water level was low. We attempted to teach her skills like kicking, blowing bubbles and moving her arms to simulate swimming. Always we were watchful and at the ready to swoop down and snatch her up and out if need be.

Finally, when she was 12, thanks to an incredible surgeon in Cincinnati, the tracheostomy tube was removed and the hole where it sat was closed. Amanda was given medical clearance to swim.

But she had been programmed for as long as she could remember to “NOT GET YOUR NECK WET!”

This was going to be tricky. We needed an instructor who understood our unique situation. This person needed to make lessons more about comfort and confidence in the water than technique. We needed someone who had an experienced bag of motivational tricks to get a girl into coolish waters to practice skill-building activities—like boring wall-kicking and bubble-blowing. Mind you, we were now dealing with an almost-teenager.

We also needed an instructor who understood he or she might spend a whole year in the pool without Amanda ever being willing to put her face in the water. And this person couldn’t be scary.

Back when I was a kid, I hated swimming lessons. I would feign sleep and pray that some sort of horrible, not-quite-deadly accident would delay our car so we would be too late to join in for the day. In my mind, the instructors were at least 6 feet tall. To me they were horrible, nasty ladies with evil thoughts in their heads. Unsuspecting parents sat in a soundproof room that allowed them to look down over the pool while torture occurred. Nightmare-inducing, I tell you.

I did not want Amanda to have the same experience. I wanted Mary Poppins in a swimsuit—spoonful of sugar and all that. Lucky for me, I found someone pretty darn close at the East Area Family YMCA in Fayetteville. She had a repertoire of games. She was sure enough of herself as an instructor to realize she did not have to follow the same format for every child. She was a mom, so she understood that goals could only be met at Amanda’s pace. And she had the magical ability to trick Amanda into thinking she was in charge.

It was slow going. The first year Amanda would go in up to her shoulders. She would dip the back of her head so her hair got wet, making it look like she had touched the bottom. She would put her lips on the water and blow. But she would not go under.

Amanda doggy-paddled. She reached down with her arm, grasping toys with her fingertips. But complete submersion was a big “No, thank you!”

We consoled ourselves by saying at least she could float. At least she was safe in the water. But there is something magical about swimming underwater. The effortless weightlessness. The silence. The blue completely surrounding you. I just felt in my bones she would love it.

We took a break for the summer. We figured she would use her skills at Lake Ontario, pools and, of course, the ocean on vacation.

And on vacation is where we were one day in Kitty Hawk, N.C. All the kids were playing in various areas of the pool. As we adults chatted, I kept my eye on Amanda, who was sitting on the steps that led down to the shallow area. She sat there, looking at the sky. Watching the other children splashing and swimming. Taking it all in.

Then, without warning, she slipped off the step and beneath the surface. Just about to jump, I watched.

Up she came, as if nothing important had happened. Smile on her face, back under she went. “Amanda went under!” I yelled to my husband, Brian.

He jumped from his lounge chair and was about to dash to where she had just disappeared.

I grabbed his arm, “She meant to!” I said with a smile on my face. At that moment Amanda’s wet head reappeared. She looked in our direction and flashed a grin.

We shook our heads in wonder.

Her time, her place, her moment. As Mary Poppins says, “That’s as it should be.”

Going to Disney World? How to plan for the most wonderful family trip
Flashes in the Dark: The prospect of fireflies adds magic to summer nights
To Top